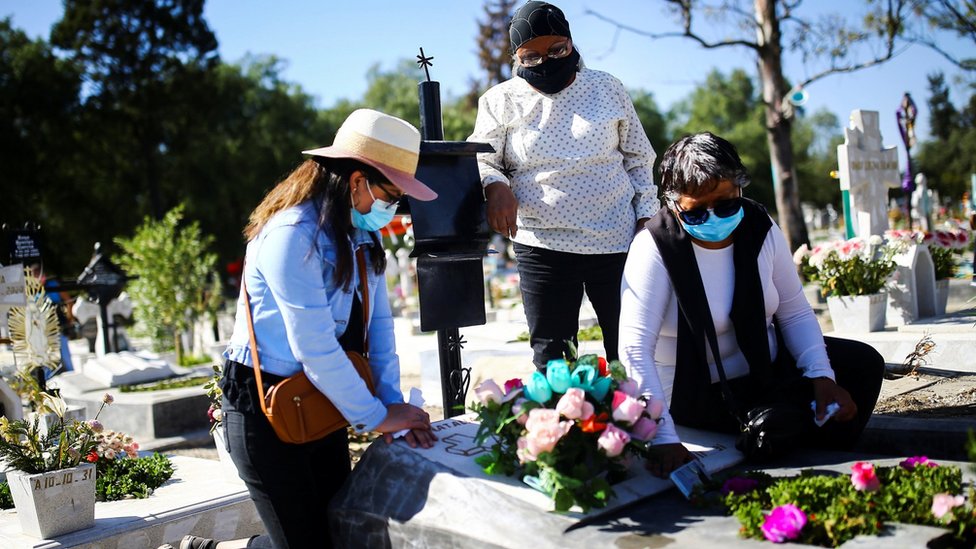 Publishedduration1 hour agoimage copyrightReutersimage captionMexico is now the fourth country to record more than 100,000 deaths from the virusMexico has recorded more than 100,000 deaths from Covid-19 – the fourth country to pass the sombre milestone.According to Johns Hopkins University, the country has suffered 100,104 deaths since the pandemic began. The news comes just days…

Mexico has recorded more than 100,000 deaths from Covid-19 – the fourth country to pass the sombre milestone.

According to Johns Hopkins University, the country has suffered 100,104 deaths since the pandemic began.

Government officials have acknowledged that the true toll from the pandemic is likely higher.

Only the US, Brazil and India have recorded more deaths than Mexico, which has a population of roughly 125 million. Its mortality rate of 9.8% is one of the highest in the world, according to Johns Hopkins data.

Critics accuse President Andrés Manuel López Obrador of being too slow to bring in measures to tackle the outbreak when the pandemic began, and of rolling back those restrictions too quickly.

In March the government ran adverts declaring that the virus “is not an emergency situation”, and President Obrador told the media that amulets and prayer were his “protective shield” against infection.

After telling Mexicans to stay at home at the end of March as Covid-19 cases started to rise, Mr Obrador eased regulations in May in a bid to restart the suffering economy.

According to John Hopkins University in the US, Mexico now becomes fourth in the ranking of countries with the highest death figures in the world.

With a chronically underfunded public health system it was always going to be difficult for Mexico to deal with the pandemic.

The country also has a large informal economy which means millions are forced to leave home each day to earn a living and can’t isolate at home.

The government of President Obrador has also been reluctant to increase the country’s debt so has not provided help to businesses or provided cash payments to workers to help them stay at home.

A number of other Latin American nations have been hit hard by the pandemic.

Like US President Donald Trump, Brazilian far-right populist President Jair Bolsonaro downplayed the virus – even after catching it himself.

His country has reported close to 170,000 deaths, second only to the US.

Peru meanwhile saw its economy shrink by 40% in April compared with the previous year as it tried to cope with the outbreak.

It comes amid continuing unrest in the country. On Tuesday Peru swore in its third president in the space of a week after former President Martín Vizcarra was impeached over bribery allegations, which he denies.