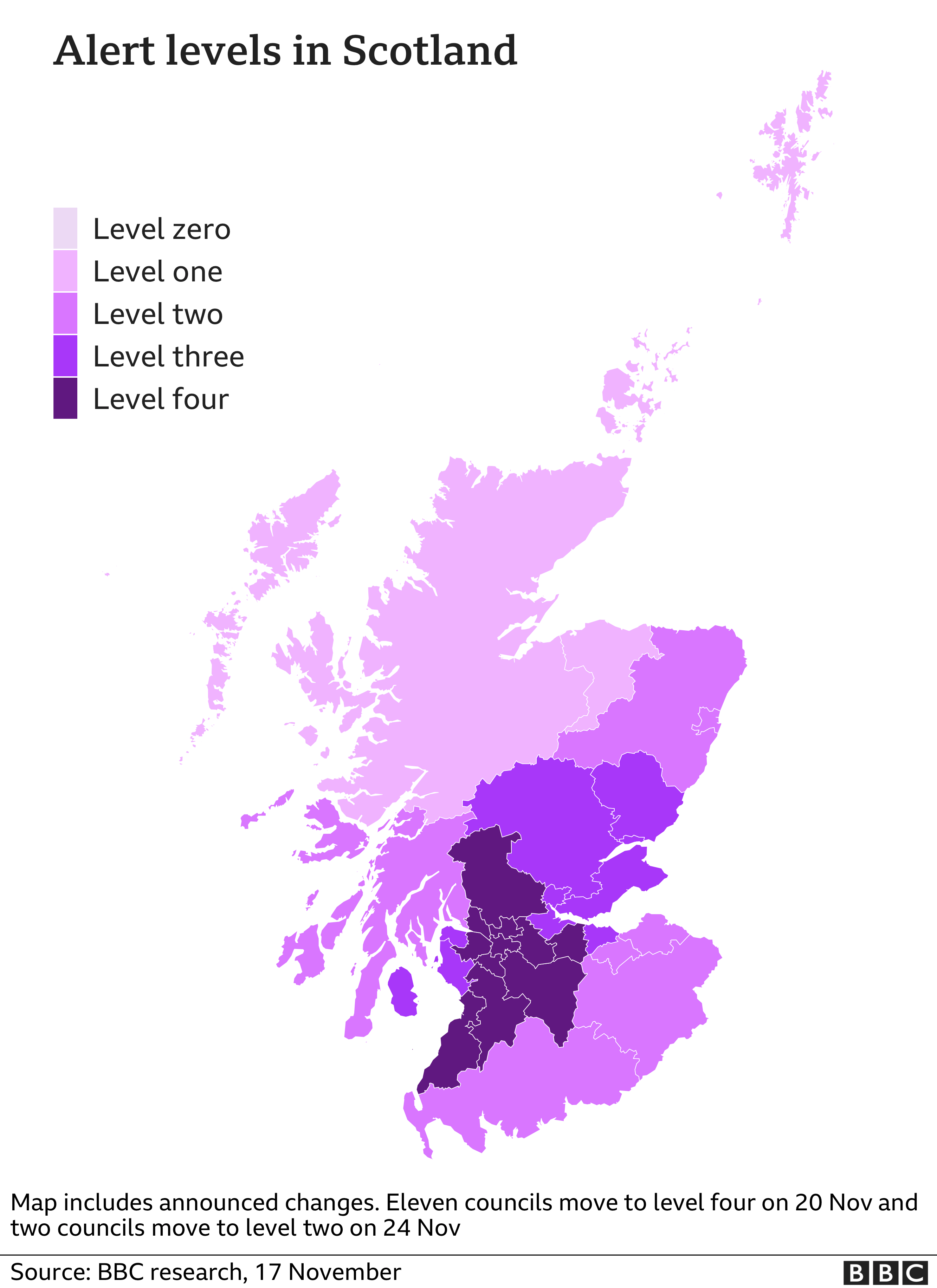 Publishedduration3 hours agoimage copyrightEPAimage captionQueues built up outside several shops in the centre of Glasgow ahead of the restrictions coming into forceMore than two million people in Scotland are now living under the country’s toughest level of coronavirus restrictions. The level four rules came into force at 18:00 on Friday in 11 council areas across…

More than two million people in Scotland are now living under the country’s toughest level of coronavirus restrictions.

The level four rules came into force at 18:00 on Friday in 11 council areas across central and western Scotland.

It means non-essential shops must close, as well as pubs, restaurants, hairdressers, gyms and visitor attractions.

The restrictions will remain in place until 11 December.

Shoppers in many areas headed to stock up on Christmas presents ahead of the restrictions coming into force.

In Glasgow city centre, queues built up outside several shops despite the cold and wet conditions.

Some stores in the city’s Buchanan Street and Argyle Street closed ahead of the deadline, leaving a few frustrated shoppers searching for gifts elsewhere.

The new rules have been accompanied by a legally-enforceable travel ban, which could see people fined by the police for travelling in or out of council areas in levels three or four of the country’s tiered system unless it is essential.

The move is aimed at driving down “stubbornly and worryingly high” levels of the virus in places which have been worst hit by the pandemic’s second wave.

It is hoped that doing so will allow some kind of easing over the Christmas period that would potentially allow families to celebrate together without causing the virus to spiral to dangerous levels in January.

First Minister Nicola Sturgeon has said that the level four restrictions will definitely be lifted on 11 December, with each of the affected council areas then being placed in either level two or three.

All of the country’s other council areas will remain in their current levels for now, although East Lothian and Midlothian will move from level three to level two from next Tuesday.

Opposition parties have criticised the Scottish government for a “lack of clarity” over why some areas – for example Lanarkshire – were moved to level four despite seeing cases fall in recent weeks.

There have also been claims that some businesses have been forced to shut down during the crucial festive shopping period without any clear scientific evidence to show they were contributing to the spread of the virus.

Industry leaders have argued that the financial help put in place by the Scottish government is not nearly enough.

Meanwhile, the EIS teaching union is asking its members whether they would be willing to take strike action over safety concerns, and has called for schools in level four areas to move to blended or remote learning.

What do the level four rules mean?

You can see full details of the restrictions here.

Speaking at her daily briefing hours before the new rules came into force, Ms Sturgeon said they would help to bring infection levels down ahead of Christmas, and prevent more people becoming ill and dying.

She added: “The fact is the fewer people who have Covid by the time we get to Christmas, the lower the risk of people being infected with it during that period.”

It was confirmed earlier this week that the number of deaths in Scotland which have been linked to Covid-19 has passed the 5,000 mark.

Statistics released earlier in the year found that the country had seen one of the biggest rises in its death rates in Europe at the height of the pandemic – behind only England and Spain. 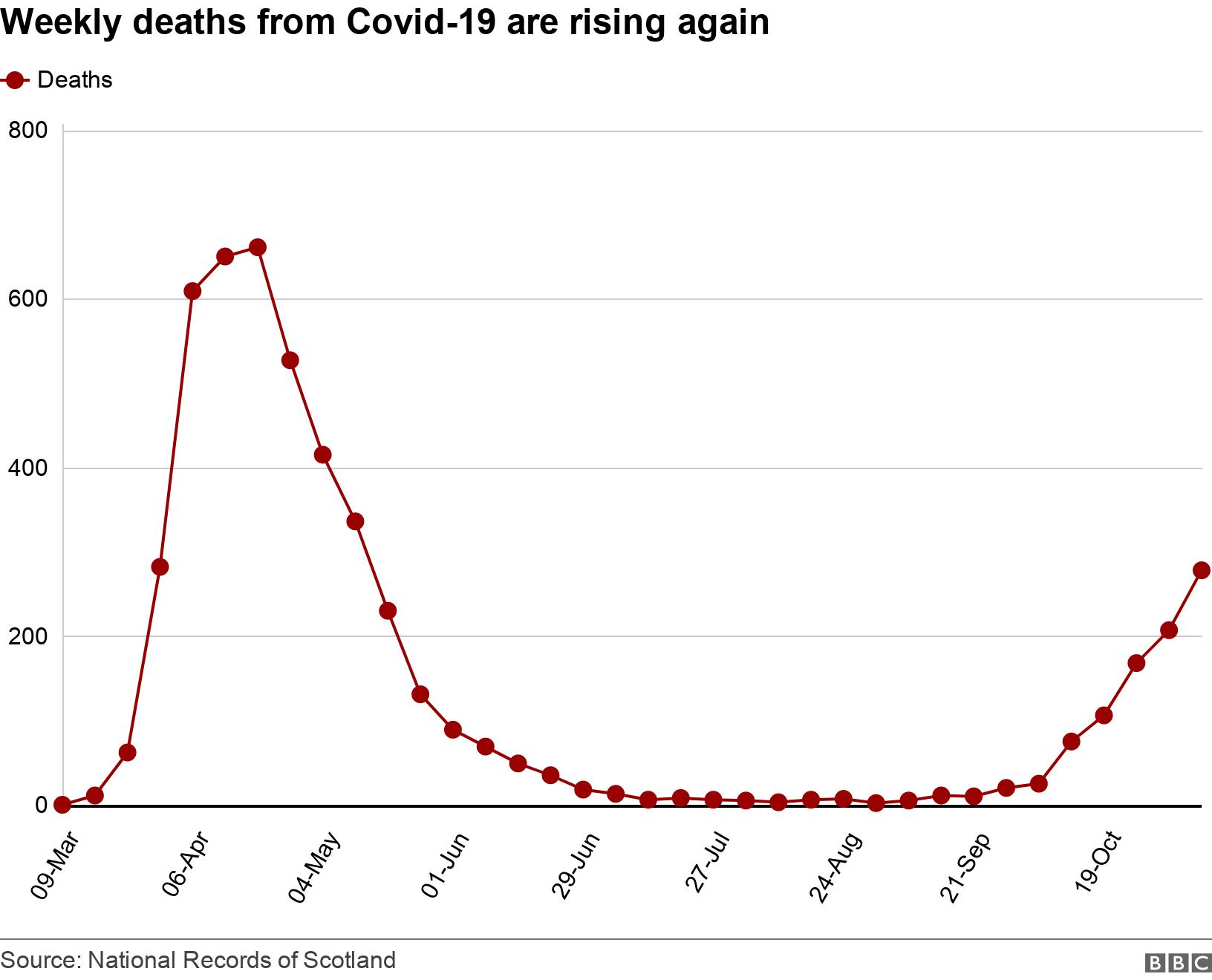 However, a poll commissioned by BBC Scotland suggested people are largely supportive of the Scottish government’s handling of the pandemic, and of the need for strict rules.

The poll also suggested that 56% of people back restrictions being relaxed for a “short period around Christmas Day”, with 32% opposed.

The first minister has been involved in talks with political leaders from the other three nations of the UK as part of efforts to find a common approach to Christmas.

She hopes to be able to announce further details next week, but has warned that a careful balance has to be struck between giving people some freedom to celebrate together while avoiding a major spike in the number of cases afterwards.

Ms Sturgeon told the Scottish Parliament earlier this week: “I want people to have a degree of normality over Christmas.

“But I don’t want to be in a position of the country having to live with a death toll that could have been avoidable if we get that balance wrong.”

The first minister also said the government was working to provide extra support to older people and “anyone who is on their own” through winter, and was considering a specific “loneliness campaign”.

The Scottish government hopes that the first vaccine against coronavirus will be delivered to the country next month, and that one million people could be vaccinated by the end of January.

England is currently in a national lockdown, and ministers are hoping to reintroduce a tiered system of restrictions when that ends on 2 December.

National lockdown restrictions were eased in Wales earlier this month, although there are still curbs on meeting other households and travelling outside the country.

And Northern Ireland is set to face a two-week period of tougher Covid-19 lockdown measures from next Friday, with non-essential shops having to close and the hospitality sector remaining shut.