Publishedduration1 hour agoimage copyrightGetty Imagesimage captionWales currently has less restrictive national coronavirus rules after the lockdown endedPeople in Wales have been warned they risk facing strict Christmas measures if Covid-19 infection rates surge.First Minister Mark Drakeford has called for people not to “fritter away” lockdown “success” after seeing the “first signs” of the firebreak working.But…

First Minister Mark Drakeford has called for people not to “fritter away” lockdown “success” after seeing the “first signs” of the firebreak working.

But if Covid cases rise, then people will not have extra Christmas freedoms, he added.

“Our top priority has to be dealing with the a public health emergency,” Mr Drakeford said.

“If our hospitals are overwhelmed then we will not be able to have the Christmas we would all like – people’s lives and people’s health come first.

“Our aim is to to deal with a public health emergency and offer people people additional flexibilities over Christmas.

“I hope we won’t come to choosing between the two but it’s a straightforward answer – as if we had to – it’s people health and the ability of the NHS to respond to people needs will have to come first.”

The UK’s four nations – England, Scotland, Wales and Northern Ireland – are trying to work out a common approach to Christmas so families across the UK can still spend time together.

Mr Drakeford and the UK’s other leaders met Cabinet Office minister Michael Gove on Wednesday and will meet again next Wednesday to agree a “common plan to provide people with new flexibilities over Christmas”.

But he called on people to “act responsibility and sustain the benefit” of the firebreak or risk more pre-Christmas – or possibility even festive season – lockdown restrictions.

“Our aim was to get a path through to Christmas,” said he said.

Wales’ 17-day firebreak ended on 9 November and Mr Drakeford told BBC Radio Wales that the chief medical officer’s analysis said the evidence was now “good enough” that it did “succeed”.

He said the amount of people with coronavirus in hospital was “stabilising” and the R number in Wales last week “could have been below one”.

“What we need to see is incidence in the community falling and that translating into falling numbers of people in hospital or needing critical care,” he added.

“We’re seeing the first signs of the growth of people in hospital beds reducing and bed numbers stabilising.

“What we have to do is build on that and make sure we don’t fritter all that away by going back to the behaving in ways that will drive those numbers back up again.”

After Wales’ firebreak ended, restaurants, pubs, gyms all reopened and infection rates has generally fallen over the past week in most places.

The south Wales valleys are currently dominating for highest case rates as Blaenau Gwent – ranked 75th in the list of UK Covid hotspots – has seen a rise in cases taking it to a rate of 356.4 cases per 100,000 people. 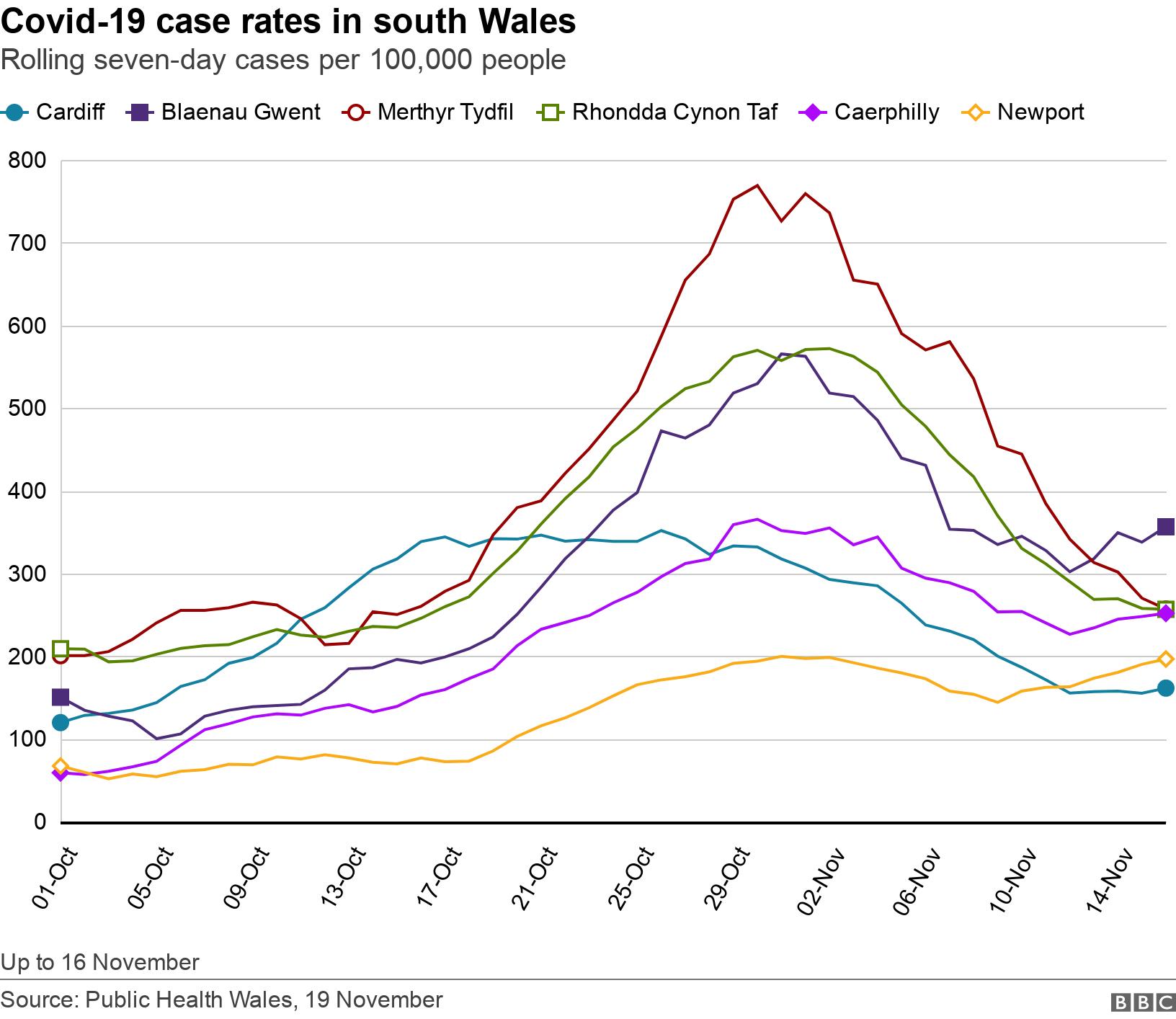 Infection rates in Caerphilly are also starting to rise and are just behind Merthyr Tydfil – about 250 cases per 100,000 people – which was once the hardest-hit area in the UK but has now fallen to 112th, according to the latest comparable data. 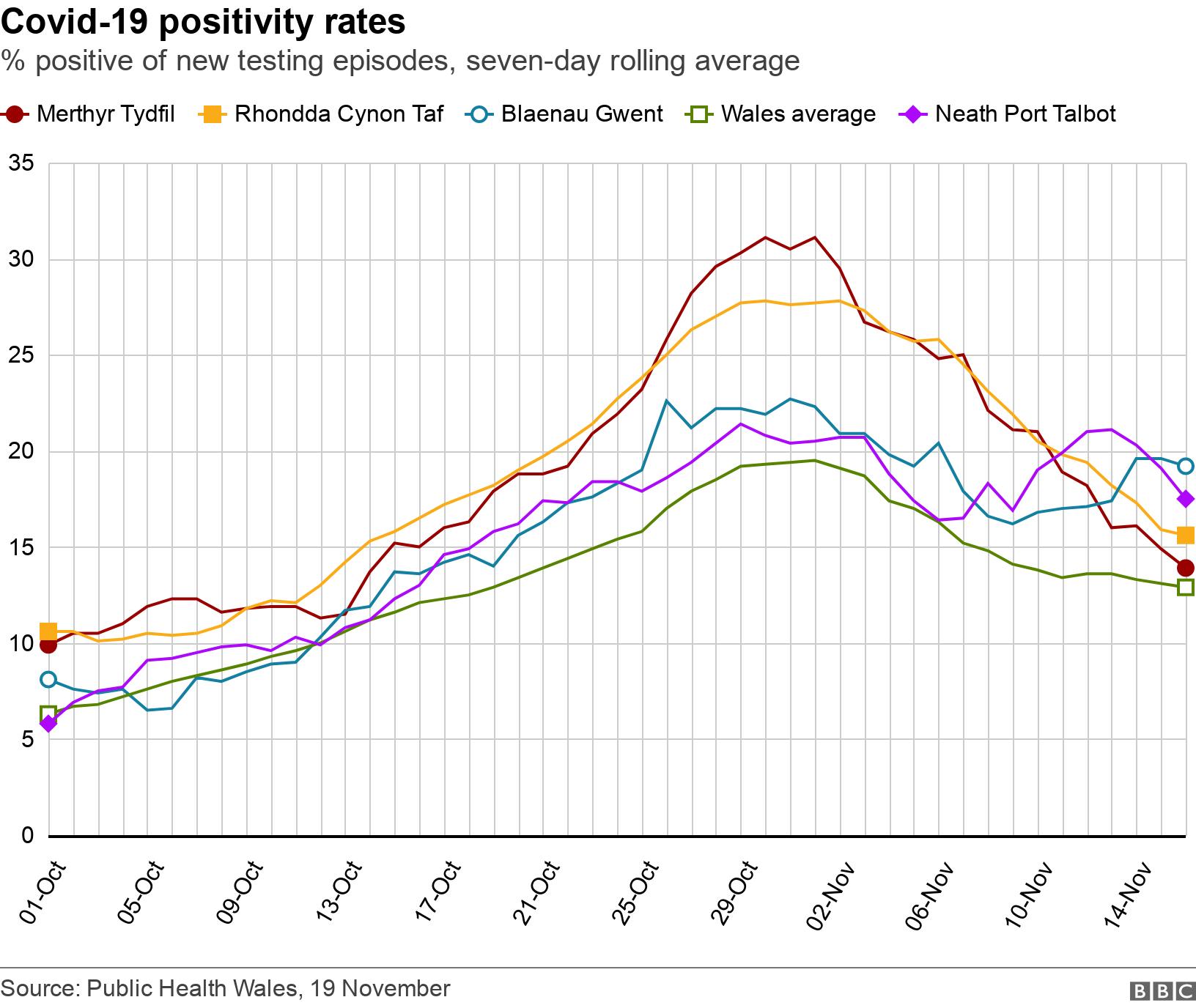 “So our assessment is that the firebreak has done what we hoped it would do.

“We are hoping that will continue for a bit longer. Our aim is to persuade people in Wales to act responsibly and sensibility now so that we sustain the benefit of the firebreak as long as we can.”

The Welsh public have already been warned more restrictions were “inevitable” if the current regulations cannot keep coronavirus cases down.

Public Health Wales’ outbreak response director Giri Shankar said the firebreak lockdown halted the rapid surge of Covid cases – but it was not yet known if the action has been enough.