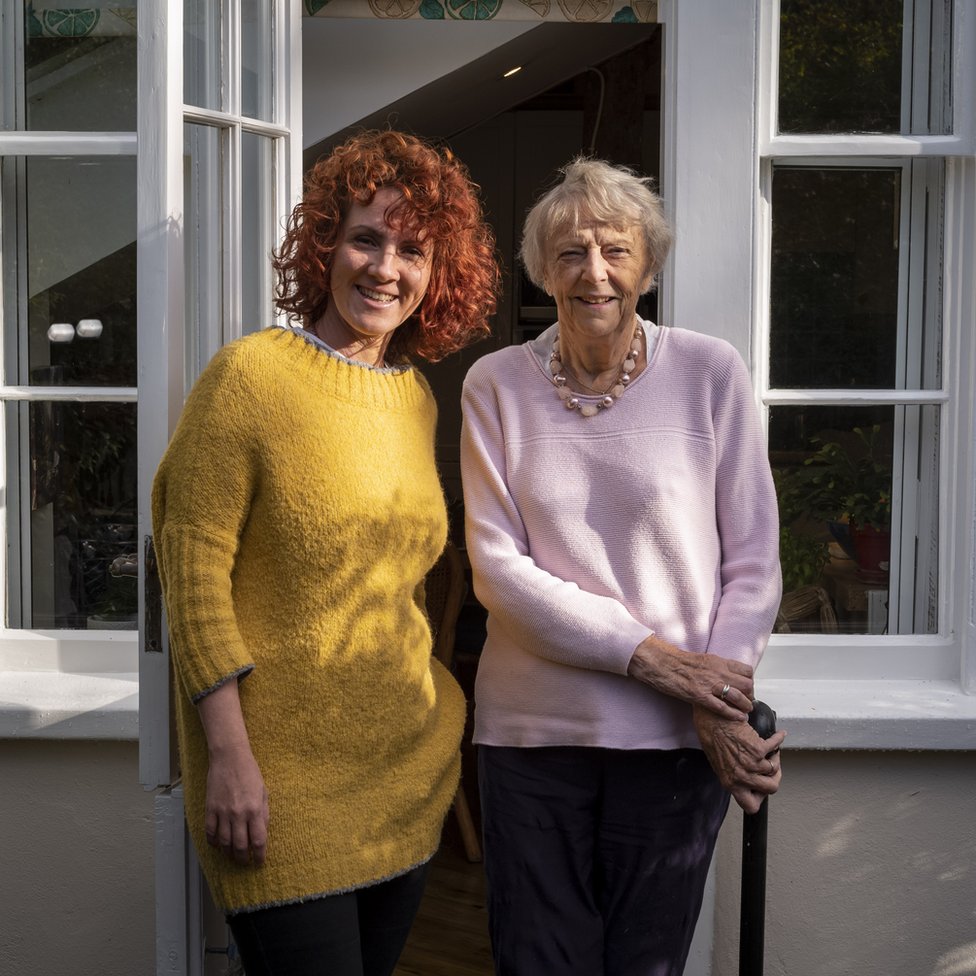 By Becky MortonBBC NewsPublishedduration3 minutes agoimage captionJoan lived alone during the first lockdownLockdown has shone a light on the issue of loneliness in the UK. Could homesharing – which often brings together older people living alone with a younger person looking for somewhere affordable to live – offer a solution?You don’t choose lonelinessBefore coronavirus hit,…

Lockdown has shone a light on the issue of loneliness in the UK. Could homesharing – which often brings together older people living alone with a younger person looking for somewhere affordable to live – offer a solution?

Before coronavirus hit, 88-year-old Joan Martin had an active lifestyle. She went to church on Sundays, taught Spanish, met up with friends.

But when the country went into lockdown that all stopped. “Suddenly my diary was empty,” she says. “I did find the telephone was a great blessing but even so the day is quite long.”

Joan, from Rickmansworth, in Hertfordshire, had become used to living on her own after her husband died 25 years ago. But lockdown accentuated the loneliness she had felt in the past.

A retired HR worker, Joan has always enjoyed being around people. She speaks three languages and has travelled a lot around Europe. But despite having a wide circle of friends, she has still at times felt lonely.

“Being active doesn’t mean you don’t come back to an empty house or face a long evening on your own,” she says. “I’m happy to read or watch television on my own – I don’t require somebody there all the time but I like to be the one that chooses. The fact of loneliness is you don’t choose it – it’s thrust upon you.”

Joan had been thinking about the idea of homesharing – finding a housemate – for a while. As she got older and watched other people her age move to care homes or retirement villages, she became more conscious of how she would cope in the future.

With no children of her own and no family living close by, she felt she needed the security and companionship of knowing there was someone else at home with her. Lockdown gave her that final push.

Karolina Malinowska is a 36-year-old freelance filmmaker. Born in Poland, she first moved to the UK for a gap year after finishing her undergraduate degree and has since lived in Scotland, Australia and the Czech Republic.

In June, after finishing her masters degree in film directing and screenwriting in Prague, she decided to return to the UK to look for work. Karolina’s family still live in Poland and she has also had periods where she has felt isolated living on her own.

“As a young person, I think people think they’re not going to be lonely because they are in relationships, they have families and that’s not going to touch them,” she says.

“I know how it feels to be alone on a Sunday evening, when people go out or have a roast dinner together, and I experienced that feeling of loneliness when my family wasn’t around.”

Karolina says she “really suffered” living alone during the first lockdown and missed the human interaction of normal life.

“I usually work from home and the inability to go away and even to travel was very limiting,” she says. “Then I finished my studies and I couldn’t plan anything and just had to take it day by day.”

Millions of people, young and old, are facing loneliness, isolation and separation during the lockdown. A BBC News project, on TV, radio and online, reveals some of their stories and how they are fighting back.

Karolina was couch surfing in London when a friend suggested the idea of homesharing. It seemed like the perfect solution – providing somewhere cheap, comfortable and sociable to live near London.

Schemes vary across the country, but generally both parties pay around £100 a month, which covers the costs of matching applicants and providing on-going support throughout the process. The homesharer also provides help with things like cleaning and shopping.

Otherwise, the relationship is much like that between any other housemates.

Karolina was matched with Joan, who in July finally took the plunge and signed up to a homesharing scheme. Karolina moved in a few weeks later.

For Joan and Karolina, homesharing has provided an unexpected respite.

The pair enjoy their own lives but often watch TV or play a game of Scrabble together in the evening. They share the housework and although their paths often cross at mealtimes they cook separately.

They do, however, enjoy baking together and Joan has introduced Karolina to her collection of classic cookery books. She’s also been teaching her to knit, while Karolina has been helping her housemate get to grips with online shopping and zoom calls.

Joan admits some of her friends think she is brave to invite a stranger into her home – particularly during a pandemic – but for her, the positives of homesharing outweigh the risks.

“For so many older people, life seems to come very much to a halt,” she says. “But [living with Karolina] opens up new areas of conversation every day. For me it’s refreshing, whereas old age could get very stale.”

The experience has also been positive for Karolina, who says the best thing about homesharing is “having someone to talk to and feeling that if you need support there is someone there”.

Living with Joan, who is more vulnerable to Covid-19 because of her age, has meant taking extra care not to bring the virus home with her – but she hasn’t had to adapt her lifestyle too much.

Luckily Karolina has mostly been able to work from home, although she has spent some time working on film sets. However, her long hours meant she was able to avoid too much physical contact with Joan and was tested for the virus as part of her job.

Research by the Mental Health Foundation suggests there was a rise in loneliness during lockdown.

Almost a quarter of adults surveyed in April said they had felt lonely in the previous two weeks – more than double the number in March, shortly before the lockdown.

Since lockdown was first eased in May, Homeshare UK – a network of 22 providers across the country – say there has been a surge of interest from people who felt isolated living alone during the first wave, as well as people struggling to pay their rent after losing their job.

New matches were initially put on hold during the first lockdown, but since then there has been a flurry of applications, with many providers now supporting more homesharers than before the pandemic.

Typically an older householder with a spare room is matched with a younger person but the organisation says it is now seeing a wider variety of arrangements.

Anna McEwen, executive director of development and support, says this includes people in their 50s and 60s, who may have been made redundant or don’t want to live on their own, and are matched with someone of a similar age.

At the start of the first lockdown in March, she says some matches did break-up, with students returning home or people working in front-line jobs deciding it was safer to move out than continue living with someone more vulnerable to the virus.

But for many, Anna says the threat of loneliness was greater than that of Covid – and in these cases matches chose to stay living together.

Both Joan and Karolina say knowing they will not be living alone has made the prospect of a second lockdown less daunting.

“Inevitably it’s sad for so many other people – the grandmothers who can’t see their grandchildren and the people who can’t visit their elderly relations,” says Joan. “There’s a lot of sadness around. I feel so blessed that I’m not in that position.”