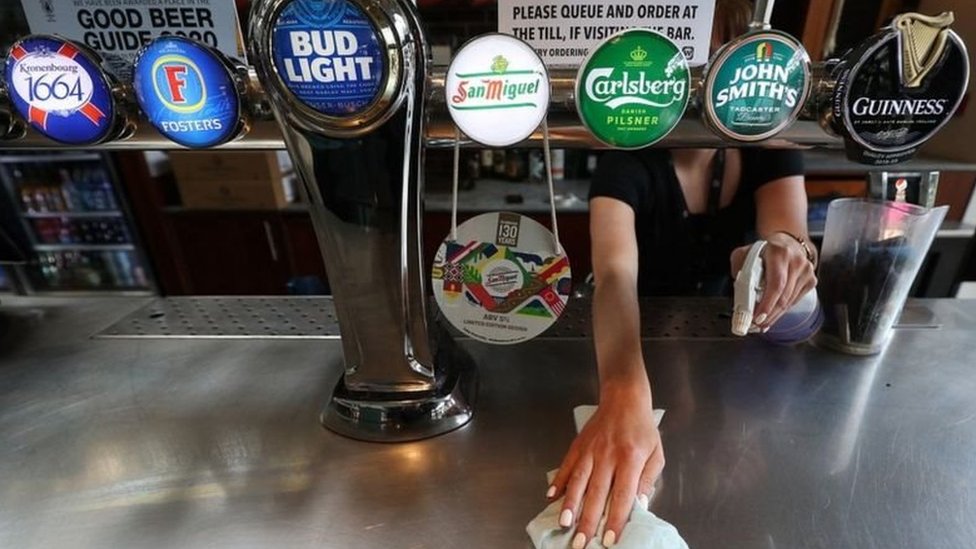 Publishedduration2 hours agoThere has been angry reaction from business leaders to the agreement reached by the Stormont Executive to extend Covid-19 restrictions from next Friday.While businesspeople have largely been critical of the plan, health experts have said it is the right thing to do.’It’s a hopeless situation’Hotelier and pub owner Bill WolseyBill Wolsey is “not…

There has been angry reaction from business leaders to the agreement reached by the Stormont Executive to extend Covid-19 restrictions from next Friday.

While businesspeople have largely been critical of the plan, health experts have said it is the right thing to do.

Bill Wolsey is “not massively surprised” at the decision but is scathing in his criticism of the executive which he says “can’t even produce a coherent policy to fight a common enemy”.

Mr Wolsey argues the hospitality industry was “the most heavily-regulated body”.

“Before lockdown we had the police come into us three times a week and we didn’t get one single complaint so we don’t think we’re the problem,” he says.

He says the situation was “hopeless”.

‘Lack of confidence in politicians’

Tina McKenzie says the sector she represents has heard little from politicians.

“If you want to look at the best way not to do government, our guys on the hill are certainly giving us a good example of that,” she adds.

She says “sniping” had created a “lack of confidence, not just within the business community but I think the population as a whole”.

‘Trust in executive at rock bottom’

The executive’s decision will “have a catastrophic effect on jobs and livelihoods”, says the chamber’s chief executive.

He says there will be “unfathomable job losses” without a multi-million pounds support package for affected businesses.

“The decision to close retail is probably the biggest boost to online shopping in Northern Ireland since the invention of the internet.”

Mr Hamilton says it is “unforgivable” that an announcement of financial support for business was not made at the same time as the lockdown was announced.

“That had the potential, if it was multi-million pounds and was targeted and was all of those businesses that were impacted, had the potential to settle a considerable number of nerves [Friday] morning.”

The Northern Ireland chair of BMA says the executive’s indecision last week had put the health service in a “precarious” position heading into winter.

He previously said reopening hospitality businesses while infections rates were high would be an “act of vandalism”.

“The executive has had to announce further restrictions tonight because infection rates are still too high, GP practices are still exceptionally busy and our hospitals are either at or above capacity,” he says.

“It is therefore imperative that the executive does all it can to support our health service in the run up to Christmas and beyond and that means acting quickly and decisively on the medical and scientific advice presented to them.”

‘Devastating consequences for health and wellbeing’

There are “deep concerns” that stopping sport and physical activity below elite level will have “devastating consequences for the health and wellbeing of the general public and sports organisations”, says the forum.

“Many of our members are growing anxious that the continued loss of habitual involvement in sport and physical activity will lead to long term challenges for individuals and local communities.

The forum adds that sporting bodies are “confident” they can continue activity safely in “heavily controlled environments” if allowed.

‘No trade, no hope – just redundancies’

Colin Neill is calling for a “rescue package” for the pubs and restaurants, saying the sector has lost faith in the executive.

“We were told that Christmas trading would be saved – that is now gone,” he says.

“We have been left with no trade, no hope and a huge amount of redundancies on our hands.”

Glyn Roberts says the decision would “kill small businesses” and give Christmas to the online retailer Amazon.

“This appalling decision will be a hammer blow to our already struggling high streets and for thousands of independent retailers forced to close at the most important trading time of the year,” he says.

“To make matters worse, this move will allow large supermarkets to continue to sell clothing while forcing independent retailers who sell these products to close.”

Aodhán Connolly says he first heard non-essential retail would close with hospitality at about 19:00 GMT on Thursday – shortly before the executive announced its decision.

Within about three hours he already had 100 emails from members of his organisation wanting to know whether they were deemed essential retailers.

He says the businesses he represents had gone “over and above” the safety measures asked of them in order to protect customers and staff.

“This is devastating because this has been the hardest year in my lifetime for retail.

“In six weeks’ time we are also ending the Brexit transition period so we’re dealing with that and quite simply there is no wiggle room.”

‘We are not all in this together’

The new shutdown will be “totally devastating” for hairdressers, says the salon owner Suzan Manning.

Clients who had appointments cancelled due to the existing restrictions had been rescheduled but would now face cancellation again, she adds.

“I know it is a really difficult situation but Stormont really is killing small businesses.

‘Holding off and holding off’

Cafe owner George Nelson says he feels the business community has been “incredibly good at adapting” but is not being allowed to plan ahead.

“We have been told for months that we need to have restrictions in place to keep numbers down,” he says.

“It is this holding off and holding off – I understand we need to protect families but opening and closing again doesn’t help anybody.”

Marianne Hood says people she represents “absolutely support health” but the “health and the livelihoods of our people that are facing absolute devastation now”.

She expects half of the 65,000 people working in the hospitality industry to lose their jobs next year.

“These cash reserves for these businesses have gone, there is no money left.”

The Derry city centre manager Jim Roddy says there is now an onus on Stormont to financially support businesses impacted by the new restrictions.

“It is right that public health is the primary focus,” he adds. “But allied to that is the need for a package that these businesses need.

“They need some certainty as to how they are going to be viable going forward – it’s incumbent on our ministers to deliver that as quickly as they can.”