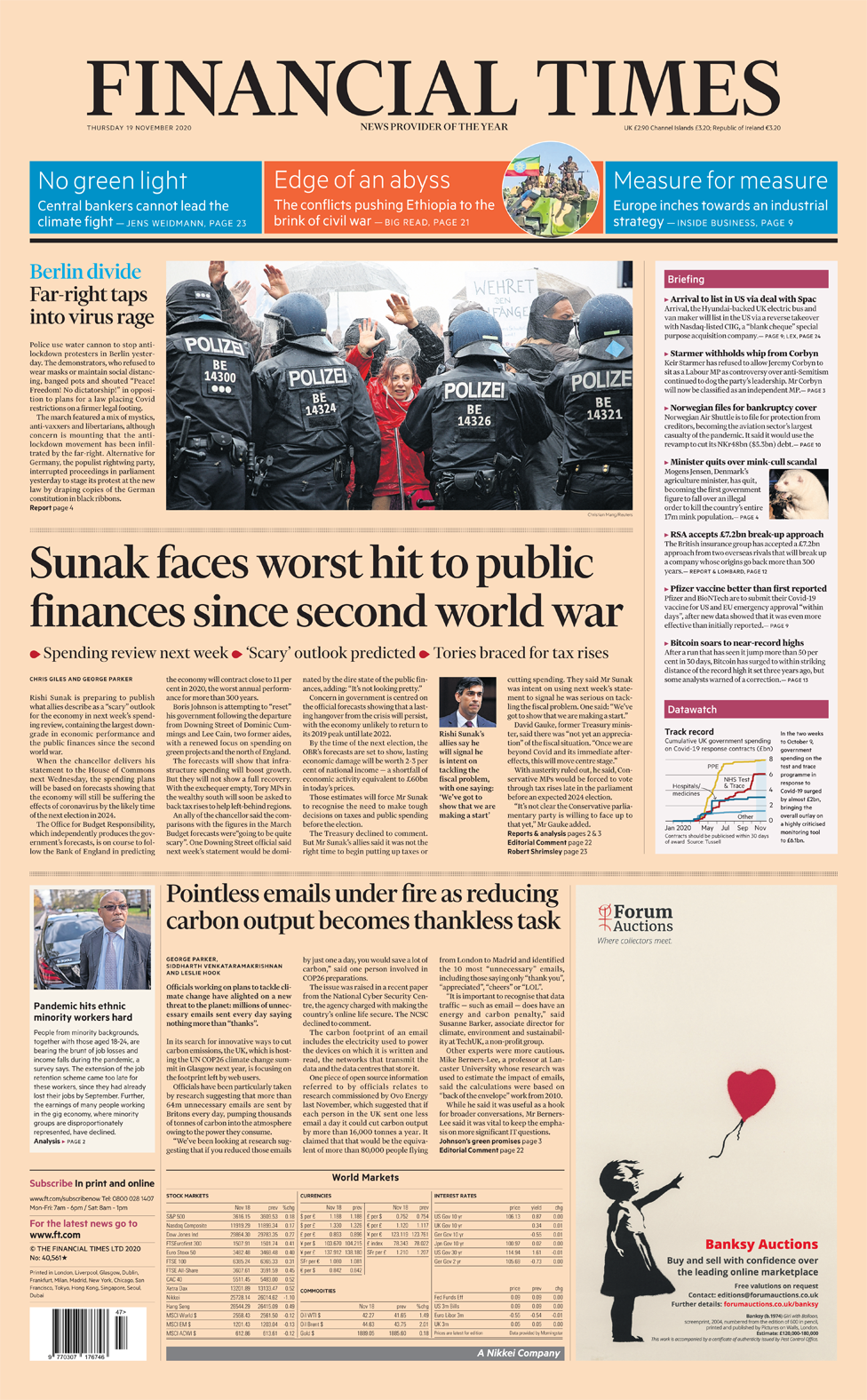 By BBC NewsStaffPublishedduration15 minutes agoimage captionMany of Thursday’s front pages lead on plans to ease coronavirus restrictions for Christmas. The Daily Telegraph says ministers are considering allowing three households to meet to allow relatives to spend five days together over the festive season. However, the newspaper says, this will come at a cost, with health…

Several of Thursday’s newspapers lead with the government’s pledge to boost defence spending.

Both the Times and the Daily Telegraph note Boris Johnson’s promise to end what he called Britain’s “era of retreat” – but the papers disagree on their figures, with the Times calling it a £16bn spree, while the Telegraph says it’s a “war chest” of £24bn.

The Times highlights plans for a new space command capable of launching its first rocket by 2022 – and what it calls a “long delayed” national cyberforce capable of protecting UK computer systems and also attacking others.

The Telegraph says Mr Johnson’s stated aim “to stand by our allies” appeared to be “for the ears of the president-elect Joe Biden”.

The Guardian contrasts the extra resources going to the armed forces with plans to heavily cut the foreign aid budget.

It also points out the announcement comes weeks after ministers resisted funding free school meals in England during school holidays.

The paper quotes insiders as saying the defence spending package was put together “at breakneck speed”.

It believes that Downing Street is seeking to “reassert control” after what it calls last week’s “meltdown” that saw the departure of Dominic Cummings and Lee Cain.

There’s a wider view of government spending in the Financial Times, which concludes that the coronavirus pandemic has left Chancellor Rishi Sunak facing the “worst hit” to public finances since World War Two.

His allies have told the paper Mr Sunak will publish a “scary” outlook for the economy in next week’s spending review.

The FT says the forecasts suggest the economy will still be suffering the effects of the virus restrictions by the time of the next general election in 2024.

The Sun leads with the row over the BBC’s interview with Princess Diana 25 years ago, saying that Prince William has “sensationally intervened”.

It reports he has “broken with precedent” to welcome the corporation’s independent investigation into how the princess was persuaded to take part.

The Daily Mail has a picture of the interviewer Martin Bashir who it claims has been “out and about” despite the BBC stating he has been too ill to answer questions.

The Home Office teams set up to address the Windrush scandal are at the centre of racism and discrimination claims according to the Guardian.

It says the most senior black official in the group resigned, describing the compensation scheme as “systematically racist” and “unfit for purpose”.

A Home Office spokesman told the paper it took all allegations of racism seriously, but rejected the claim the Windrush scheme did not support victims.

Hopes are growing for a family Christmas according to the i.

But it warns a five-day window for festive gatherings could be followed 25 days of January lockdown.

The Daily Express also has what it calls some “extra cheer” with news of two Covid vaccines producing “exciting” results.

And the Metro carries a picture of a proud and smiling NHS consultant, Perpetual Uke, with the twin babies she had while in a coma with coronavirus.

The simple headline is: “My Covid Miracles.”