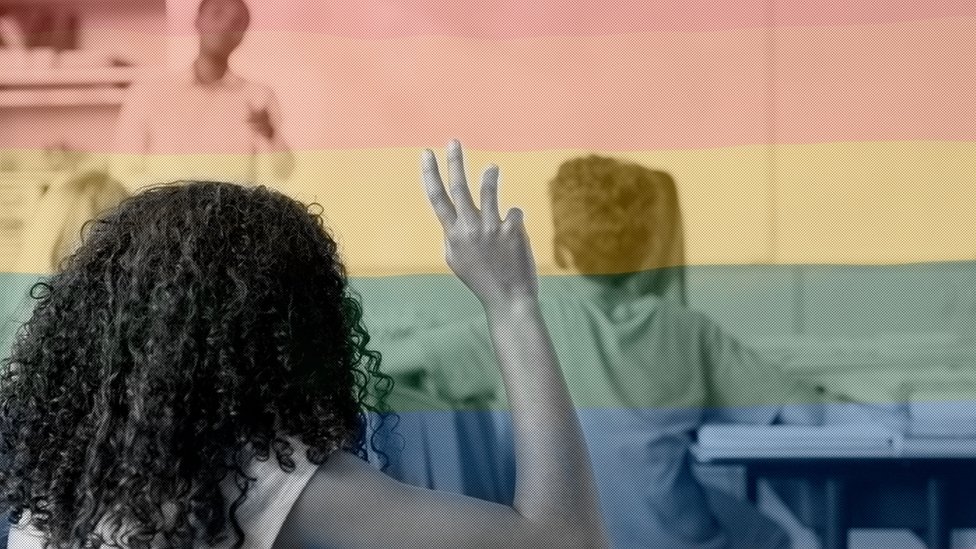 By Ben HunteLGBT correspondentPublishedduration4 hours agoGovernment-backed projects tackling bullying of LGBT students in England’s schools have had their funding pulled, the BBC has learned.The decision came despite an earlier pledge to continue investing in school programmes targeting homophobic, biphobic and transphobic bullying.Ministers admit that those identifying as LGBT face a higher risk of bullying which…

Government-backed projects tackling bullying of LGBT students in England’s schools have had their funding pulled, the BBC has learned.

The decision came despite an earlier pledge to continue investing in school programmes targeting homophobic, biphobic and transphobic bullying.

Ministers admit that those identifying as LGBT face a higher risk of bullying which can cause long-term harm.

But they say the funding was always due to come to an end.

The Government Equalities Office had funded several well-received programmes costing at least £4m, which specifically targeted LGBT bullying, since 2014. Many had been extended and given further government support.

Initially called The Homophobic, Biphobic and Transphobic Challenge Fund, the government programme was not compulsory for schools, but it allowed teachers, staff and students to receive free training and workshops.

Providers of workshops, as well as parents, students and teachers, had been expecting the funding to continue.

The government acknowledges the serious impact anti-LGBT bullying can have on educational attainment, absence levels, emotional wellbeing and mental health.

But the BBC has learned that the government quietly ended its funding of LGBT anti-bullying initiatives last March.

Concerned father Richard said his son Tom came out as gay a few years ago.

“At first, he was loud and proud about who he was,” said Richard.

Now in Year 10, he has since been continually bullied by other students, which led to him self-harming and lashing out in class.

The pair have asked for their names to be changed as they fear further attacks.

“He started getting negative comments at school, had trouble in corridors, and he got threatening voicemails. He’s ended up cutting himself,” said Richard.

“His school’s been hopeless at sorting things out for him. If it was racism, they would’ve prioritised it, but because it’s homophobia, they’ve had no idea how to deal with it.”

It was a “disaster” that the government had ended this specific funding, said Richard, who believes Tom’s school “massively” needs help with LGBT inclusion work.

“They just don’t have the money or skills to do it themselves.”

The Government Equalities Office said: “The anti-bullying grant fund, which provided 2,250 schools across the country with materials and training, was always due to end in March 2020.”

However, this is the first time that the funding has not been extended since it was originally announced in October 2014 by the then Minister for Women and Equalities, Nicky Morgan.

‘Ignored and shut out’

One provider of LGBT inclusion workshops, who wanted to remain anonymous as they feared that speaking out would jeopardise any future possible funding, said schools and programme providers had been expecting a further extension.

Her organisation was waiting for another funding announcement at the beginning of November, inviting new applications for grants.

She said she felt “sick” that schools would not be able to continue their work, and claimed her organisation had been “ignored” and “shut out” by the government, even though its programmes were well-received.

“What message does this send to young people? This government is rolling back on their initial commitment to LGBT rights,” she said.

Diversity Role Models, a charity which also received funding through the government’s LGBT anti-bullying programme, recently carried out what it called a “pulse check” on levels of LGBT education and bullying in 90 schools across England.

It found that homophobic, biphobic and transphobic language was used in the majority of schools, and some schools were described as unsafe places for LGBT people to be themselves.

Metro, an LGBT charity, first received funding in 2016. Dr Greg Ussher, CEO of Metro, told the BBC that “most schools” had been unable to continue their LGBT inclusivity work without government backing.

“We were able to work directly with over 200 schools, train over 4,000 staff, as well as engage students in school-wide equalities activities.

“Government funding meant that schools could have this support for free, but they now need to find funds from their already stretched budgets,” he said.

Nancy Kelley, chief executive of Stonewall, said cutting funding would lead to students being left to “suffer in silence”.

“We know LGBT people are disproportionately affected by poor mental health, and some of this is because of the way they were treated at school.

Kevin Courtney, joint general secretary of the National Education Union, said it was important for every young person to learn about the negative stereotypes and ideas which still lead to many LGBT+ people feeling marginalised.

“If the government is dropping this funding, they need to explain what alternative plans they have to give schools support with challenging LGBT+ bullying.”