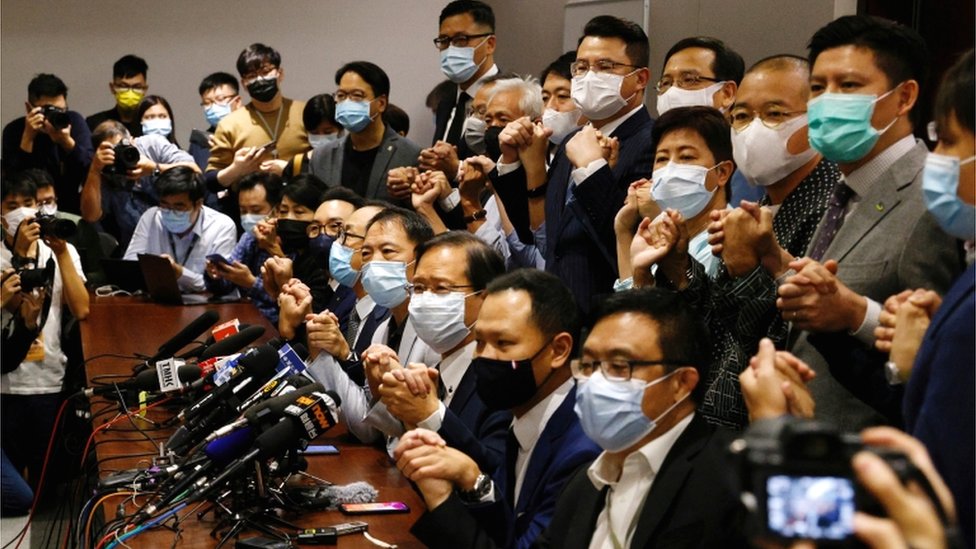 Publishedduration25 minutes agoimage copyrightReutersimage captionFifteen pro-democracy lawmakers resigned this month in protest at China’s new rulesChina has strongly rebuked the UK, the US, Australia, New Zealand and Canada after being accused of a concerted effort to silence critics in Hong Kong. The countries, which form the Five Eyes alliance, criticised China’s imposition of new rules…

China has strongly rebuked the UK, the US, Australia, New Zealand and Canada after being accused of a concerted effort to silence critics in Hong Kong.

They urged Beijing to reverse course.

A Chinese foreign ministry spokesman warned countries to stay out of China’s affairs saying: “They should be careful or their eyes will be plucked out.”

“The Chinese never make trouble and are never afraid of anything,” Zhao Lijian told journalists in Beijing on Thursday, saying it did not “matter if they had five or 10 eyes”.

In response, all of Hong Kong’s pro-democracy lawmakers announced their resignation. For the first time since the UK handed the territory back to China in 1997, the body has almost no dissenting voices.

The dismissal of the four lawmakers was viewed by many as the latest attempt by China to restrict Hong Kong’s freedoms, something Beijing denies.

Foreign ministers from the Five Eyes group urged China to reinstate them, saying the move was a clear breach of Beijing’s legally binding commitments to protect the territory’s freedoms and autonomy.

They also accused Beijing of undermining the rights of people in Hong Kong to elect their representatives.

Five Eyes is an intelligence-sharing alliance of the five Anglophone countries set up during the Cold War and initially developed to monitor the USSR and its allies.

Earlier, China’s Ministry of Foreign Affairs in Hong Kong said any attempt by foreign states to threaten or pressure Beijing to make concessions was “doomed to fail”.

Hong Kong was returned to China under the “one country, two systems” principle, which allowed it to retain more rights and freedoms than the mainland until 2047.

As a Special Administrative Region, Hong Kong was to have its own legal system, multiple political parties, and rights including freedom of assembly and free speech.

But in late June China passed a controversial, far-reaching national security law in the territory after years of pro-democracy and anti-Beijing protests, which reduced Hong Kong’s autonomy and made it easier to punish demonstrators. It criminalises “secession, subversion and collusion with foreign forces”.

Beijing says the law will return stability to the territory, but western governments and human rights groups say it effectively curtails freedom of speech and protest. After the law was introduced, a number of pro-democracy groups disbanded out of fears for their safety.

Earlier this month, a reporter who helped investigate suspected police involvement in a violent attack on protesters last year was arrested, in what journalists said was a tactic to discourage reporting.

Around 300,000 people currently hold BNO passports, while an estimated 2.9 million people born before the handover are eligible for one. China last month strongly criticised the UK in response, telling London to “immediately correct its mistakes”.