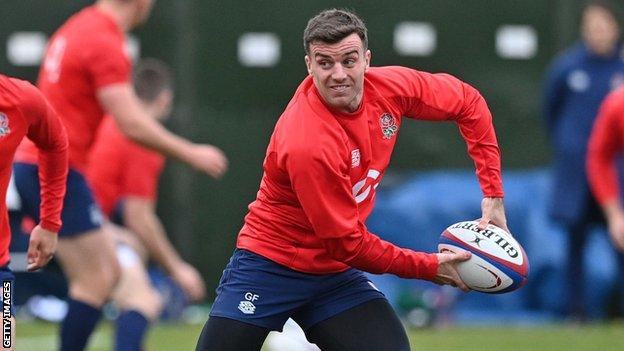 Fly-half George Ford will start on the bench as he returns from injury in England’s second Autumn Nations Cup match against Ireland, with captain Owen Farrell keeping the 10 shirt.

Head coach Eddie Jones has previously preferred Ford at 10 with Farrell at 12 when the pair are both fit.

But Jones did not think Ford was “going to be ready” to start after missing two games with an Achilles tendon injury.

In the back row, World Cup stars Tom Curry and Sam Underhill return.

Props Mako Vunipola and Kyle Sinckler are also back in the starting XV, with Ellis Genge and Will Stuart on the bench.

Ford, who started at 10 for England in their first four Six Nations matches at the beginning of the year, missed the Italy and Georgia games to undergo treatment on a long-standing Achilles tendon injury.

Jones said Ford’s exclusion was because of this injury, describing him as “a very talented number 10” and “a mainstay of our team”

“For him to come on in the last part of the game and add his tactical kicking and distribution skills will be very handy for us,” he continued.

Exeter lock Jonny Hill is back on the bench after starting in the win against Italy which helped England become Six Nations champions.

England are currently top of their Autumn Nations Cup pool but face their toughest test since the return of international rugby.

Ireland, who beat Wales 32-9 last week, are second in the group and the winner of Saturday’s game will likely compete for the overall title on finals weekend.

Head coach Andy Farrell praised his side’s “dominant” performance in the tournament opener, but Jones questioned whether Ireland could repeat the feat at Twickenham.

“Ireland were very happy with their dominant performance against Wales and we know they are a very well-coached team,” he said.

“As their coaching staff said, they were dominant, so the challenge is can they bring a dominant Irish performance to Twickenham?

“I know Andy Farrell very well, they will be well prepared and they’ll come to Twickenham with a point to prove, which always makes them dangerous.

“It’s the most important game of the year for us and I’m sure they are treating it exactly the same way.”

Ireland have made four changes for their trip to Twickenham as fly-half Ross Byrne replaces injured captain Johnny Sexton.