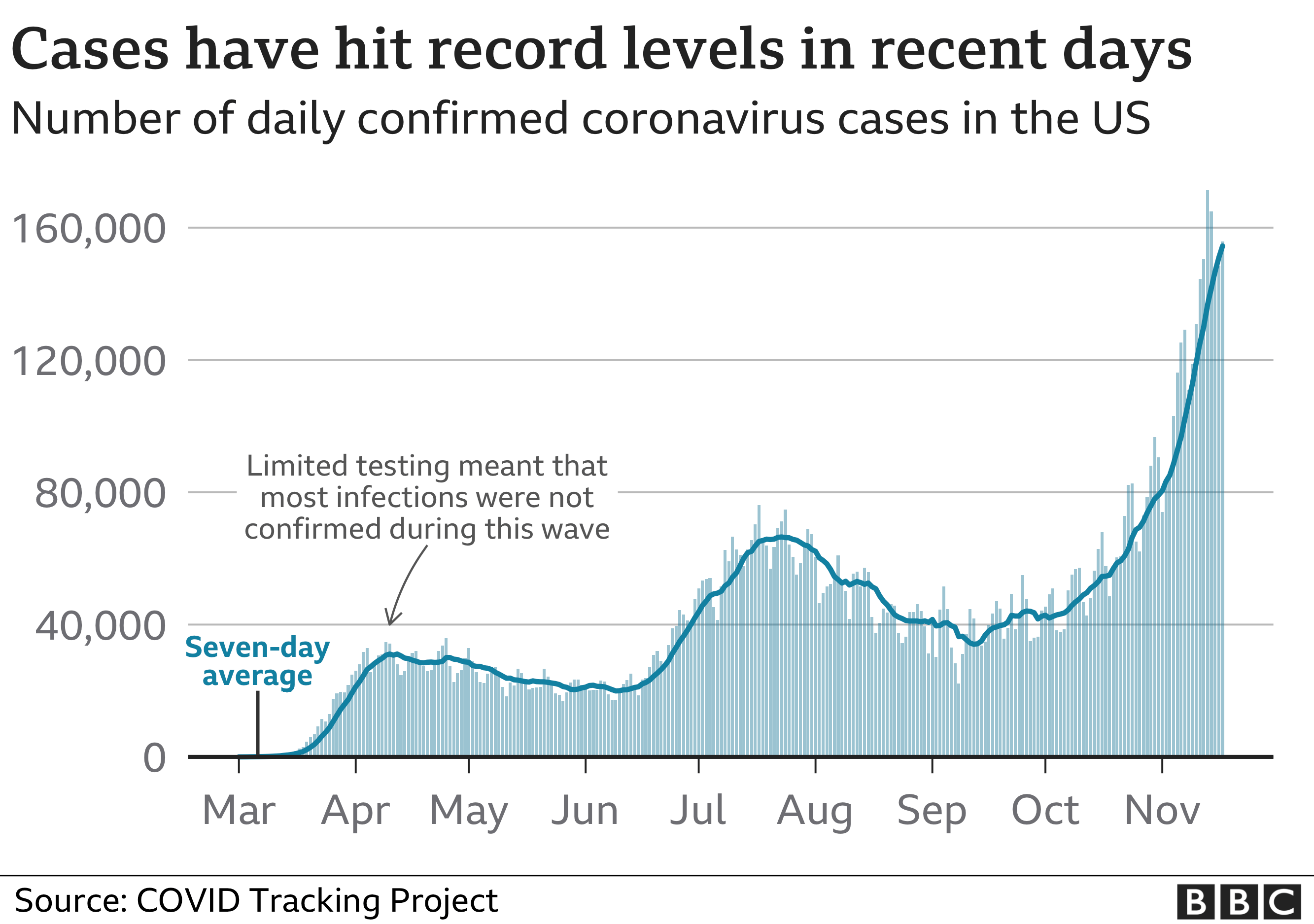 Publishedduration42 minutes agoimage copyrightReutersimage captionThe US has reported more cases and deaths than any other countryThe US has recorded more than 250,000 deaths from Covid-19, a bleak marker as cases soar once again across the country.According to Johns Hopkins University, the country has now reported 250,029 deaths and nearly 11.5 million cases.It has more infections…

The US has recorded more than 250,000 deaths from Covid-19, a bleak marker as cases soar once again across the country.

According to Johns Hopkins University, the country has now reported 250,029 deaths and nearly 11.5 million cases.

It has more infections and a higher death toll than any other country worldwide.

And cases have once again started to soar throughout the US, hitting new daily highs in the last week.

Speaking to the BBC on Wednesday, top US infectious diseases Dr Anthony Fauci said the country was “going in the wrong direction at a very precarious time”, with people more likely to gather inside as the weather gets colder.

The news comes as New York City – the epicentre of the US outbreak in the spring – has ordered the closure of its schools from Thursday, amid a spike in cases.

The decision to close the US’s largest public school system came as positive test rates for the virus surpassed the 3% threshold, officials say. It will affect some 300,000 children.

What did Dr Fauci say?

In an interview on the BBC News channel, Dr Fauci warned about the new surge in cases leading to more deaths.

“It’s a very serious situation because there are lagging indicators,” he said. “So when you see the massive increase in cases as we’re seeing now particularly as more and more people are doing things inside, we’re in a very difficult situation.”

He repeated his call for people to “double down” on public health measures, such as wearing face coverings, physical distancing and avoiding crowds.

“They sound so simple and we know they can work. But there’s a degree of Covid fatigue – people just are worn out with these restrictions,” Dr Fauci said.

He urged people to “hold out for just a little longer because help is on the way” in the form of vaccines.

At the end of March – when the US had recorded 2,200 deaths – Dr Fauci predicted the pandemic could kill up to 200,000 Americans and infect millions more.

On Wednesday data released by Pfizer and BioNTech said the vaccine they had developed to tackle the virus appeared to protect 94% of adults over 65 years old.

Last week, Pfizer and BioNTech published preliminary data suggesting the vaccine offered 90% protection against Covid-19 and said there were no safety concerns.

A letter from New York City Schools Chancellor Richard Carranza released on Wednesday informed parents that all schools would close and classrooms would immediately shift to online learning “until further notice”.

“You will hear from your principal shortly about next steps for you and your student. Please note that this is a temporary closure, and school buildings will reopen as soon as it is safe to do so.”

The move comes only eight weeks after the school system reopened to students. It is the latest city to close school and shift to online learning after Boston and Detroit, with Las Vegas and Philadelphia delaying plans to return pupils to classrooms.

Bill de Blasio, the New York mayor, said: “No one is happy about this decision. We all in fact are feeling very sad about this decision because so much good work has been put into keeping the schools open, opening them up to begin with.”

However, he said that officials had “set a very clear standard” on safety metrics that needed to be met in order for schools to take pupils, “and we need to stick to that standard”.

“I want to emphasise to parents, to educators, to staff, to kids that we will intend to come back and come back as quickly as possible,” he said.

The school closure is the latest measure amid attempts to curb a fresh outbreak of cases.

Last week further restrictions were put into place – including bars and restaurants moving to takeaway-only after 22:00 and parties at private residences being limited to 10 people.

The decision to close the schools is in contrast to measures in Europe, where businesses have closed but schools largely remain open.

The move, which represents a major backslide for the city’s coronavirus recovery, has also left parents scrambling for last-minute childcare options.