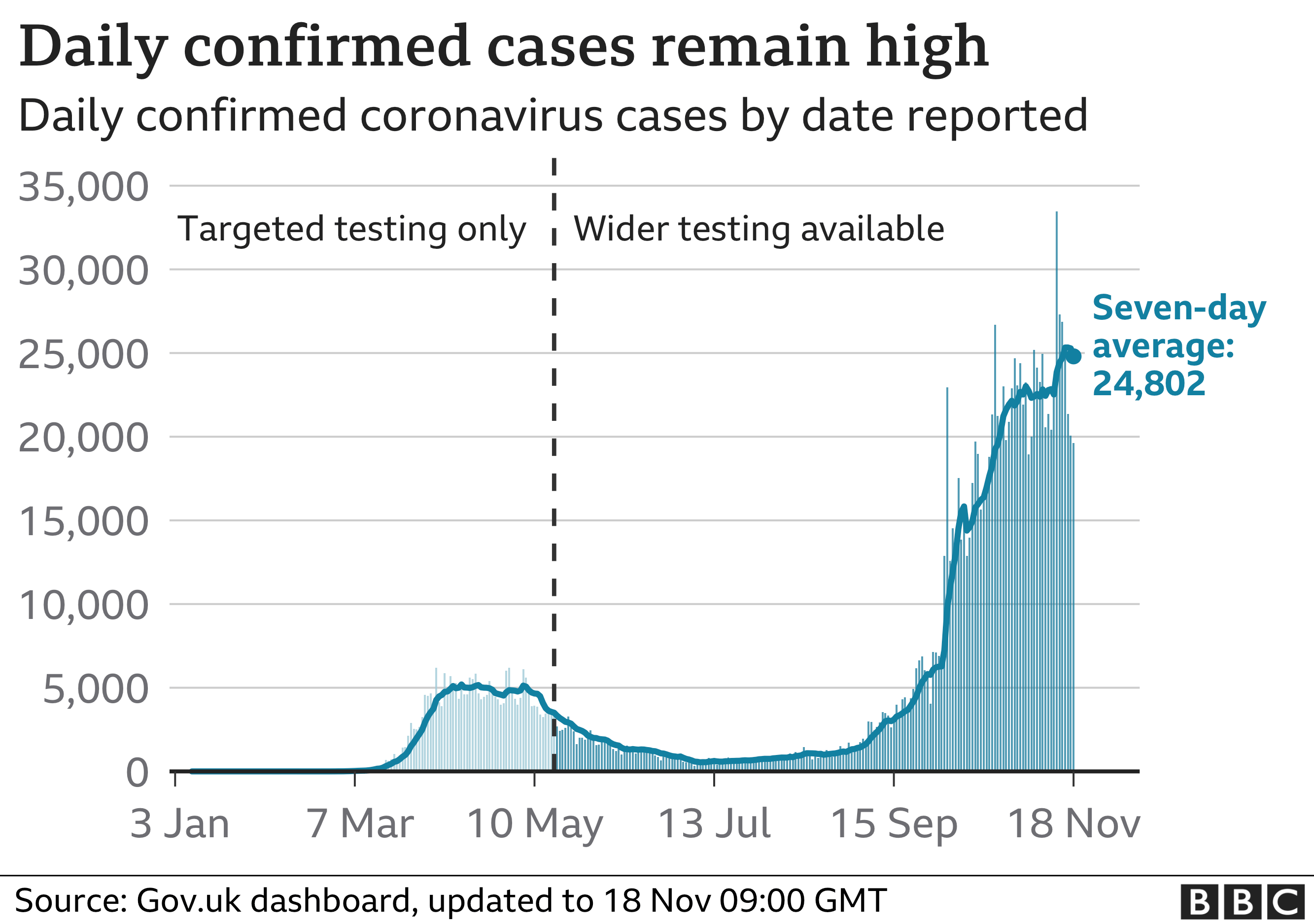 Publishedduration27 minutes agoimage copyrightGetty ImagesMixing between households at Christmas could pose “substantial risks”, particularly for older people more vulnerable to coronavirus, a scientist advising the government has warned.Prof Andrew Hayward said there would be a “cost” to families getting together.It comes as No 10 said proposals to ease restrictions over Christmas will be set out…

Mixing between households at Christmas could pose “substantial risks”, particularly for older people more vulnerable to coronavirus, a scientist advising the government has warned.

Prof Andrew Hayward said there would be a “cost” to families getting together.

It comes as No 10 said proposals to ease restrictions over Christmas will be set out next week.

Scientists have suggested that for every day measures are eased, five days of tighter rules would be needed.

Prof Hayward, a professor of infectious disease epidemiology at University College London, said mixing at Christmas does pose “substantial risks” particularly where generations “with high incidence of infection” socialise with older people “who currently have much lower levels of infection and are at most risk of dying” if they catch Covid-19.

Prof Hayward – a member of the government’s Scientific Advisory Group for Emergencies (Sage) – told BBC Radio 4’s Today programme: “My personal view is we’re putting far too much emphasis on having a near-normal Christmas.

“We know respiratory infections peak in January so throwing fuel on the fire over Christmas can only contribute to this.”

Sage is a committee attended by scientists across a range of fields. While its members may not individually agree, their role is to look at the evidence, and present a view to the government.

The UK’s four nations – England, Scotland, Wales and Northern Ireland – are trying to work out a common approach to Christmas so families spread across the UK can still meet up.

Scotland’s First Minister Nicola Sturgeon said a meeting between the four nations on Wednesday had “discussed the Christmas period and how we could come to a sensible… and safe plan that would allow people, not 100% normality, but a greater degree of normality – in particular the ability to spend some time with loved ones”.

Downing Street said plans for what will follow England’s lockdown – which is expected to end on 2 December – and proposals to ease restrictions over Christmas would be set out next week.

A No 10 spokesman said on Thursday that ministers would keep case numbers “under review” into next week, when it will “set out more details of the next phase” after lockdown ends.

He pointed to Prime Minister Boris Johnson’s previous comment that “whilst Christmas will be a little bit different from normal this year, we continue to hope to ensure that families can spend Christmas together”.

Any rule change would be for a limited time, maybe just a few days, BBC health correspondent Nick Triggle has said.

But, he said, the advice was likely to urge families not to hold big gatherings and to travel by car, rather than public transport.

England is expected to return to the tier system of localised restrictions, with household mixing banned indoors in the top two tiers, when its lockdown ends.

Defence Secretary Ben Wallace said he did not want to be “the Grinch that stole Christmas” but No 10 wanted to safeguard the NHS and protect lives.

He told ITV’s Good Morning Britain: “I would love all of us to be able to have a Christmas, but more than anything I want us to get through this Covid and try and get this country back to normal and I want to protect lives.”

Dr Katherine Henderson, president of the Royal College of Emergency Medicine, said she was concerned some NHS hospitals in Covid hotspots were seeing “crowded” emergency departments, as well as the beginnings of “corridor care” and “problems unloading ambulances”.

She told BBC Radio 4’s World at One programme: “That’s the reality of what we’ve got in hospitals at the moment. Let’s not have that happening and then we can talk about Christmas. But we’re not in that situation at the moment.”

Dr Henderson warned that we would “regret” a [festive] season that’s given Granny Covid for Christmas” rather than working through a “rational, controlled, plan to come out the other side of this when we’ve got a vaccine into spring and we can actually start having a much more normal society”.

Her comments follow news that the University of Oxford coronavirus vaccine has shown a strong immune response in adults in their 60s and 70s – raising hopes it could protect age groups most at risk from the virus.

Prof Hayward also told the Today programme government messaging had not been consistent.

He said: “When policy is undulating between stay at home to save lives, eat out to help out, the tier system, the second lockdown and now proposals for an amnesty on social distancing – it is a highly inconsistent message.”

Carl Heneghan, professor of evidence based medicine at the University of Oxford told the BBC some “coherent thinking” from health officials was now required and they would need to “take the public with them” in the run up to Christmas.

But he said there had been some “impressive falls” in Covid cases in some areas and “if we can see that carrying on we would be in a much better position to see what to do at Christmas”.

Public Health England’s Dr Susan Hopkins said on Wednesday that tough restrictions might be needed before and after the holiday to allow mixing to take place.

On Wednesday, the UK recorded another 19,609 Covid cases and 529 more deaths within 28 days of a positive test.

Meanwhile, scientists who advised the government during the early stages of the pandemic told a BBC documentary focused on the first lockdown that they “never checked” how Covid-19 could be spread by staff working at more than one care home.