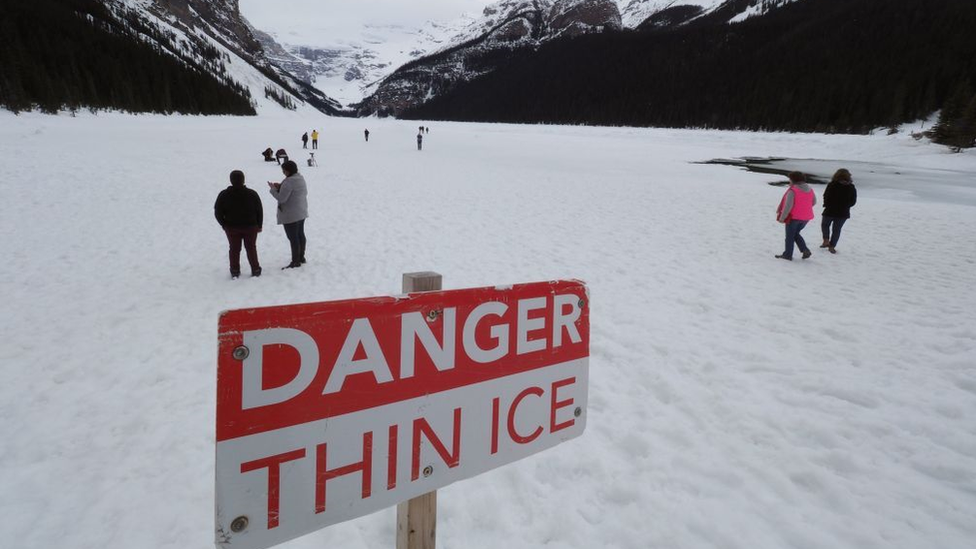 By Matt McGrathEnvironment correspondentPublishedduration2 hours agoimage copyrightGetty ImagesWinter activities on ice are becoming increasingly dangerous as the world warms, scientists say.When researchers looked at data on drowning accidents in largely frozen lakes or rivers, they saw a “strong correlation” to rising temperatures. They found that deaths from drowning were five times higher when warmer weather…

When researchers looked at data on drowning accidents in largely frozen lakes or rivers, they saw a “strong correlation” to rising temperatures.

They found that deaths from drowning were five times higher when warmer weather made the ice thinner and weaker.

Children aged under nine years and younger adults were most at risk.

For indigenous peoples in many northern regions of the world, livelihoods often depend on access to frozen lakes in winter for hunting, fishing and travel.

In countries like the US, Canada and Russia, winter leisure activities such as skating or tobogganing on ice are also hugely popular.

But as the world warms, winter ice is becoming less stable and scientists believe it poses a greater threat of accidental drowning.

Canadian researchers looked at data on 4,000 drowning events in 10 countries over three decades since the 1990s.

They found that higher temperatures were a good predictor of the number of deaths by drowning.

“We can confidently say that there is a quite a strong correlation between warmer winter air temperatures and more winter drownings,” said study leader Sapna Sharma, from York University in Toronto, Canada.

“Almost half of the winter drownings were associated with warmer temperatures.”

The researchers collated data from official sources including coroner’s offices. They were able to compare these figures to longstanding records from lakes showing when ice formed and melted each winter.

Canada and the US had the highest number of drownings related to ice, an issue that was particularly acute among indigenous communities further north.

The use of snowmobiles on lakes was associated with many of the lake fatalities.

One of the saddest aspects of the study was the fact that many of the victims were very young.

“We found that almost half of those drowned in Minnesota where there was no vehicle involved were children under nine years old,” said Sapna Sharma.

“They were playing on the ice, tobogganing or ice skating and they just weren’t able to recognise when the ice was unsafe. They may not have recognised that slushy ice or a little open patch of water could be so fatal.”

Even where lake or river accidents weren’t deadly, they often had life-changing results.

In cold water accidents where children suffered cardiac arrest, some 90% also experienced significant neurological damage – and only 27% were alive a year later.

However, some countries have managed to limit the number of drownings during winter, including Germany and Italy.

Local laws prohibit the use of snowmobiles on lakes and activities like skating are often limited until local authorities deem the ice to be safe.

Education is also seen to be a key element. According to Barbara Byers from the Canadian Lifesaving Society, people just don’t recognise the personal threat that a changing climate can pose.

“People think that ice is ice but appearances can be deceiving,” she told BBC News.

“People may think it’s cold out, the ice must be fine but it really is the quality of the ice or the type of ice that’s really important.

“Ice now gets frozen and thawed and when that happens there’s water in-between the layers of the ice. So it may look hard and frozen, but it’s not.”

Researchers say that despite efforts to educate, they expect that drowning events will likely increase in the future.

They are particularly worried about this winter, as people may be spending more time outdoors due to the pandemic, with potentially fatal results.

“Everything’s closed right now, and more people are spending time in nature and where they might not have done so before,” said Sapna Sharma.

“This year, it’s forecast to be a warmer, wetter winter in Canada, so in combination with more people going outside that could be that could be quite dangerous.”

The study has been published in the journal Plos One.