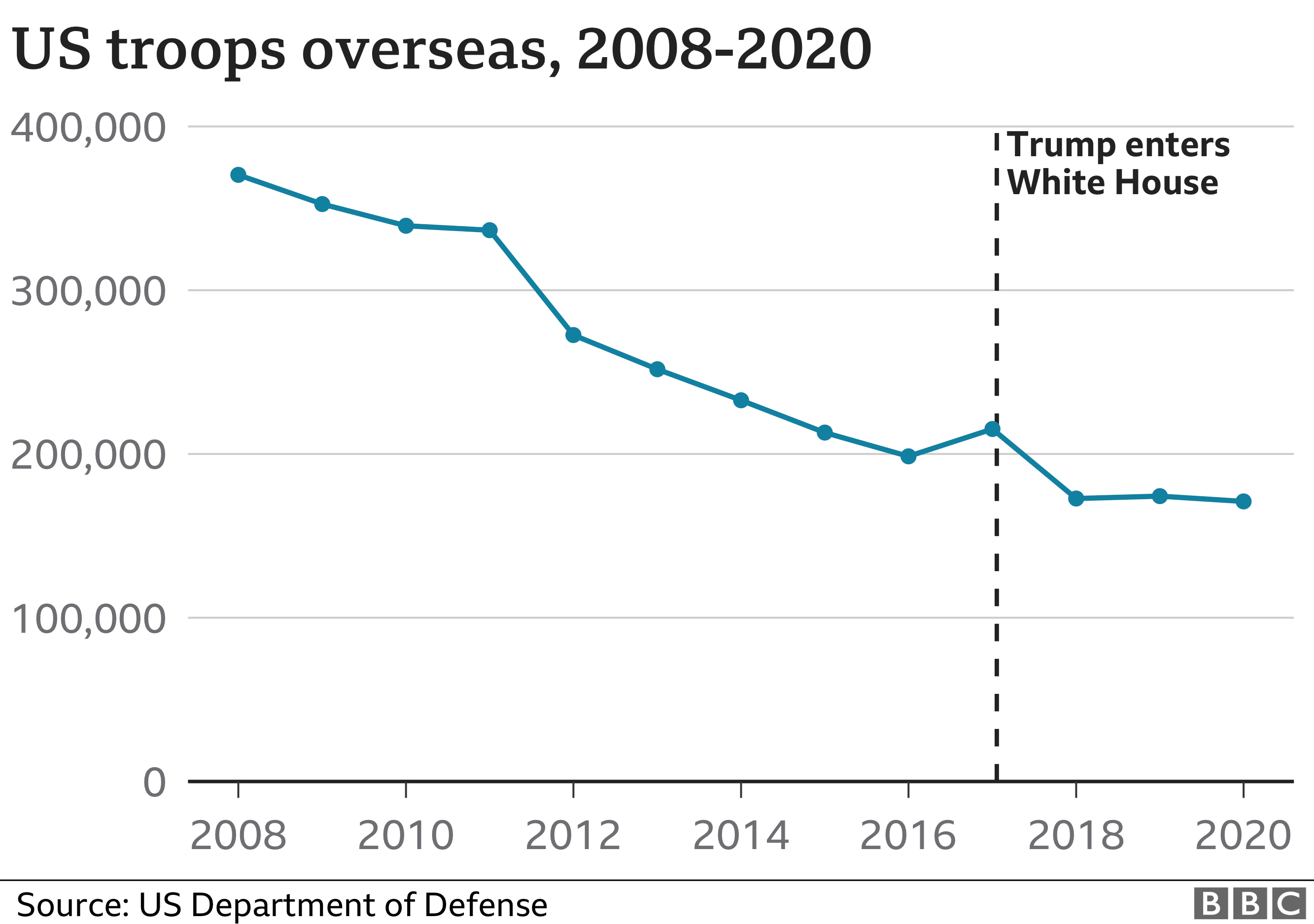 Publishedduration4 hours agoimage copyrightGetty Imagesimage captionUS troops have been involved in the fight against the Islamic State jihadist group in IraqSenior Republicans and US allies have voiced alarm at the announcement that a large number of American troops will be removed from Afghanistan and Iraq.The US is to withdraw 2,500 troops from both countries by…

Senior Republicans and US allies have voiced alarm at the announcement that a large number of American troops will be removed from Afghanistan and Iraq.

The US is to withdraw 2,500 troops from both countries by mid-January, the US Department of Defense confirmed.

President Donald Trump has long called for troops to come home and has criticised US interventions abroad.

The head of Nato warned of a “very high price”. Senate Majority Leader Mitch McConnell called the plan “a mistake”.

Mr McConnell – usually a staunch defender of Mr Trump – also warned the president against making “any earth-shaking changes in regards to defence and foreign policy” before leaving the White House.

Mr Trump is yet to concede to Democrat Joe Biden, and the cuts are scheduled to take place five days before Mr Biden takes office on 20 January 2021.

The president-elect has said he is “rightly weary of our longest war” in Afghanistan but also said there was a need to “end the war responsibly, in a manner that ensures we both guard against threats to our homeland and never have to go back”.

The Biden transition team has not yet commented on the announcement.

Pentagon says consultations were made

Acting US Defense Secretary Chris Miller – who was installed last week after Mr Trump abruptly fired Mark Esper – said the move reflected the president’s policy “to bring the wars in Afghanistan and Iraq to a successful and responsible conclusion and to bring our brave service members home”.

“We will protect our children from the heavy burden and toll of perpetual war, and we will honour the sacrifices made in the services of peace and stability in Afghanistan, Iraq and around the world,” he said.

He did not confirm if the drawdown plan had been endorsed by Gen Mark Milley, chairman of the Joint Chiefs of Staff, but said the decision followed “continuous engagement with the president’s national security cabinet”.

Until Mr Esper’s removal, the Pentagon had said the Taliban had not met pledges to reduce violence, which has soared since the militants began peace talks with the Afghan government in September.

Mr Miller said the US had met its goal of defeating extremists and helping “local partners and allies to take the lead in the fight”. US officials said the withdrawal plans had yet to be hammered out in detail and it was not yet clear which troops would be pulled out, Reuters news agency reports.

Afghan President Ashraf Ghani’s spokesman said he and Mr Miller had spoken on the phone about “continued meaningful US military support to the Afghan Security and Defence Forces”.

Shortly after the announcement, several rockets were fired into the Green Zone in Baghdad and landed near the US embassy. It is the first such attack since Iraqi militias linked to Iran agreed to stop targeting the embassy compound last month. The Iraqi military said an Iraqi child was killed and five civilians were wounded.

Cut reduces leverage over the Taliban

President Trump has been determined to withdraw troops from Afghanistan. There were even fears he might try to recall all remaining forces before Joe Biden assumes office. That hasn’t happened, but this cut in troop numbers will reduce the leverage the Biden administration will have over the Taliban.

Under the US-Taliban agreement signed in February, all US forces will be withdrawn by May 2021, but, in theory, only if the Taliban fulfil certain conditions. Those don’t seem to have been met yet.

Talks between the Taliban and Afghan officials have finally begun, but progress has been slow, and violence has been intensifying. Meanwhile, many in the intelligence community still have concerns about the Taliban’s continuing links with al-Qaeda.

Mr Biden has also signalled his intent to eventually withdraw forces, but the expectation is he may be willing to proceed more slowly, and place the Taliban under greater scrutiny. He has also talked of a desire to leave a small counter-terrorism force in the country.

The Taliban, however, could react violently to that proposal or any change in the withdrawal schedule.

US forces in Afghanistan and Iraq

Criticism at home and abroad

And Senator Ben Sasse, who sits on the Senate Intelligence Committee, said it was a “weak retreat” and that it was “not grounded in reality and will make the world a more dangerous place.”

Nato Secretary-General Jen Stoltenberg, in a rare public show of concern, said “the price for leaving too soon or in an uncoordinated way could be very high”. In a statement, he added that Afghanistan risked once again becoming a platform for international militants to organise attacks.

The alliance relies heavily on the US forces for logistical support in Afghanistan. They form the bulk of about 12,000 troops from 38 Nato allies and partner countries, including the UK, serving in the country.

Some analysts say the sharp, fast reduction of troops would weaken the Afghan government’s ability to deal with a resurgent Taliban.

“The US is only going to be able to focus on counter-terrorism operation – it’s really going to have to cut back its train, advise and assist mission which means the Afghan government is going to feel the brunt of this,” said Seth Jones, senior adviser at the Centre for Strategic and International Studies.

But at least one Democratic politician supported President Trump’s move. Adam Smith – the chair of the House Armed Services Committee – said it was “the right policy decision”.

“While the history of conflict in the region is complex and predates our direct involvement, after nearly 20 years of armed conflict, Americans and Afghans alike are ready for the violence to end,” he wrote in a statement.

People in Afghanistan are desperate for an end to war – but many analysts fear the Afghan army is not strong enough to fight on its own if violence continues after foreign troops have left.