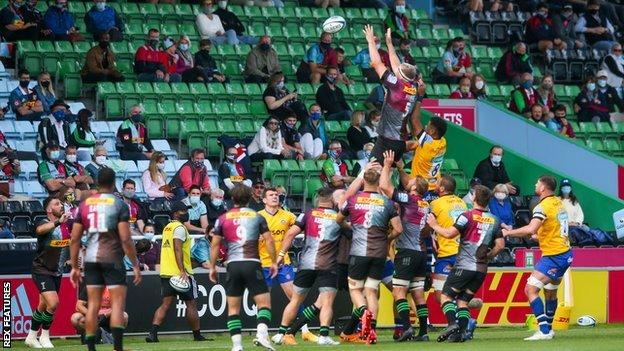 Harlequins played Bath in front of around 2,700 fans at The Stoop in SeptemberThe government is set to confirm a rescue package of emergency funding for sports impacted by the absence of spectators because of coronavirus.A bailout of several hundred million pounds will be announced on Thursday, consisting of both grants and loans. Both rugby…

The government is set to confirm a rescue package of emergency funding for sports impacted by the absence of spectators because of coronavirus.

A bailout of several hundred million pounds will be announced on Thursday, consisting of both grants and loans.

Both rugby codes and horse racing will be among the main beneficiaries, although a range of sports will receive assistance.

The Premier League and English Football League will not be among them.

The government says the sport is wealthy enough to support itself.

Nigel Huddleston, the UK sports minister, has said he will be making a statement on financial support for the sport sector in the House of Commons on Thursday after weeks of talks with the Treasury.

In September, more than 100 sports bodies wrote to Prime Minister Boris Johnson to ask for emergency funding, warning of “a lost generation of activity” because of coronavirus.

The coalition of organisations said they were “united in our concern that at a time when our role should be central to the nation’s recovery, the future of the sector is perilous”.

They also pointed to the £1.6bn of support that the arts sector received in July.

Sports were then asked to tell the government how much they estimated they would lose as a result of turnstiles being closed.

In a devastating blow to cash-strapped sports bodies, plans for a partial return of spectators from 1 October were scrapped amid a rise in coronavirus cases.

Turnstiles have been closed since March, despite sports saying that pilot events with socially-distanced crowds have been achieved safely.

The Department for Digital, Culture, Media and Sport is working on allowing fans into stadiums in areas where rates of infections are deemed sufficiently low – possibly before Christmas.

“I understand the frustration over fans and we hope to get crowds back in the ground as soon as possible,” Johnson said on Wednesday in response to a question from Karl McCartney, the Conservative MP for Lincoln.

Meanwhile, the petition to exempt golf courses from the list of venues required to close during lockdown will be debated by MPs on 23 November, as will a similar one relating to gyms.