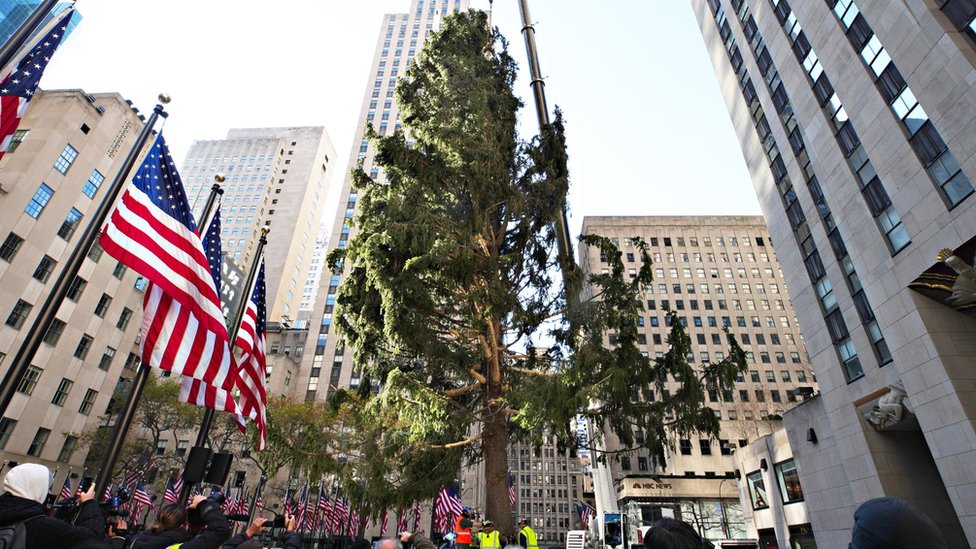 Publishedduration2 hours agoimage copyrightGetty Imagesimage captionThe tree will be decorated in the coming weeksThe Rockefeller Center’s Christmas tree is one of the most famous in the world. But the giant Norway spruce erected at the New York City landmark this year has left some less than impressed.The 75ft (23m) tree arrived on Saturday and was…

The Rockefeller Center’s Christmas tree is one of the most famous in the world. But the giant Norway spruce erected at the New York City landmark this year has left some less than impressed.

The 75ft (23m) tree arrived on Saturday and was lifted into position by crane.

It is set to be decorated in the coming weeks, and the lights switched on at a ceremony early next month.

But social media users have been quick to mock its “sparse” appearance, with some calling it an apt tribute to 2020.

The tree was brought in from Oneonta, New York state, and arrived with a police escort.

The Rockefeller Center shared an image of it being secured into place on Twitter, writing: “Let the holiday season begin!”

Tishman Speyer, the company that owns the Rockefeller Center, has said it is particularly proud to keep the tree tradition going this year, at a time when the coronavirus pandemic has forced the cancellation of some other New York holiday traditions.

But some social media users joked that its “underwhelming” and “bare” appearance was appropriate for 2020.

“The Rockefeller Christmas tree, just like the rest of us, really been through things in 2020,” one Twitter user wrote.

“I know it’s 2020 and everything is terrible but the Rockefeller Center Christmas Tree should be a lot fuller,” said another.

Many users also responded with jokes likening it to the small, sparse tree in the popular animated television special A Charlie Brown Christmas.

Others, however, defended the tree, saying it would look different when its branches had settled and it was decorated.

“That tree has been bound and tightly wound for transport. It will fill out,” one wrote.

“It was donated. No cost to the city. The branches have to settle, it will have lights and ornaments. It will look beautiful,” another said.

The Rockefeller Center Christmas tree is not the only sparse spruce to be mocked on social media.

Similar jokes have been made about this year’s tree in Cincinnati’s Fountain Square.

Elsewhere, the Christmas tree in Rome in 2017 was widely panned on social media, with some likening it to a toilet brush.