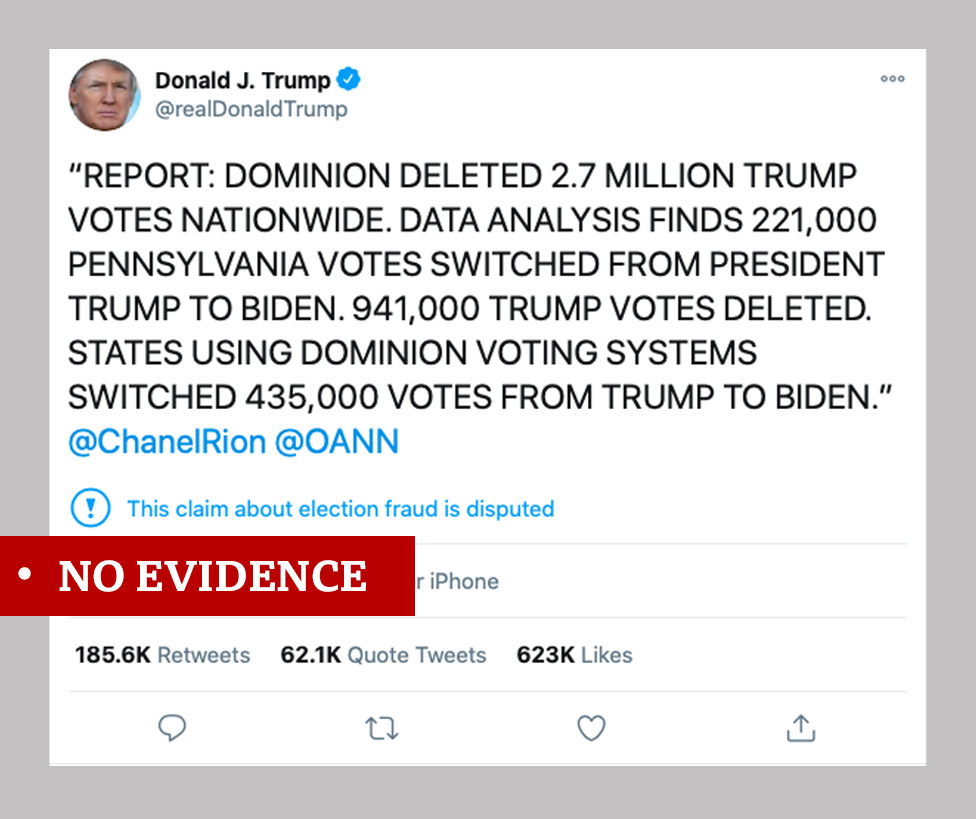 By Christopher Giles and Jake HortonBBC Reality CheckPublishedduration2 hours agoimage copyrightGetty Imagesimage captionDominion software has been widely used in voting and counting machines in this election.President Trump has criticised the use of an electronic voting system widely used by election authorities across the United States, saying it’s lost him millions of votes.The machines targeted by…

President Trump has criticised the use of an electronic voting system widely used by election authorities across the United States, saying it’s lost him millions of votes.

The machines targeted by Mr Trump were provided by Dominion Voting Systems, and the accusations range from the deletion of votes to inappropriate influence over the company by his political opponents.

So what were his claims, and do they stand up?

Verdict: There is no evidence to support this claim.

The president is referring to a news item on the pro-Trump, conservative news outlet One American News Network (OANN).

“Elections systems across the country are found to have deleted millions of votes cast for President Trump,” it said.

The OANN report referred to an “unaudited analysis of data” obtained from an election monitoring group called Edison Research.

However, the company’s president, Larry Rosin, said: “Edison Research has produced no such report and we have no evidence of any voter fraud.”

OANN did not provide any evidence to back up its claim.

President Trump and his supporters have also been sharing a report from Fox News anchor Sean Hannity claiming Dominion voting machines flipped votes in key states from Trump to Biden.

The report highlights problems in Antrim County, Michigan, where Dominion machines were used – suggesting there could be widespread software issues in other counties as well.

There was an issue in Antrim County, but it wasn’t the Dominion software that failed – it was down to a human error, as pointed out by Michigan’s Secretary of State Jocelyn Benson.

The Antrim County clerk at first failed to correctly configure the reporting function in the machine, so the initial results were incorrect, with Mr Biden winning by around 3,000 votes.

Election officials noticed this unusual result in a typically Republican area, so they corrected the reporting function and re-ran the count – which showed President Trump winning by around 2,500 votes.

Secretary of State Benson said the initial incorrect tally was quickly identified and corrected – and even if it wasn’t, it would have been detected at a later stage in the checking process designed to identify such mistakes.

She added: “There is no evidence this user error occurred elsewhere in the state.”

Mr Hannity also pointed towards potential problems in Georgia where the Dominion machines are widely used – but the Georgia Secretary of State said that despite some reporting delays, the software accurately counted and reported votes in the state.

Verdict: This is not correct – the company is not owned by the “Radical Left”. It has made donations to both Republicans and Democrats in the past.

It’s not clear who Trump is referring to when he talks about ownership by the “Radical Left”. He is probably referring to claims circulating online that the company has links to the Clinton family and other Democratic politicians, including Speaker of the House Nancy Pelosi.

It is also important to clarify the difference between direct ownership of Dominion as claimed by Mr Trump, and donations made by the company either for philanthropic or lobbying purposes. Dominion has made donations to both Republican and Democratic interests, but it’s not uncommon for a company such as this to lobby for government contracts in this way.

Dominion Voting has released a statement saying it is a non-partisan US company and has no company ownership relationships with any member of the Pelosi family or the Clinton Global Initiative.

The Clinton Foundation has also issued a statement saying it “has never had any stake in Dominion Voting Systems; we have never been involved in the company’s operations; and we can confirm that we are not currently working together”.

Dominion did however donate to the Clinton Foundation in 2014, and made a philanthropic commitment to the foundation to donate election technology to poorer countries.

The rumours about Ms Pelosi stem from her former chief of staff, Nadeam Elshami, being hired by Dominion – but it has also hired staff previously associated with the Republican party.

The accusations of involvement with Dominion have also extended to members of President-elect Biden’s transition team.

Posts on social media claim Peter Neffenger, who is a volunteer for Mr Biden’s team, is chairman of a subsidiary of Dominion, Smartmatic.

Mr Neffenger is chairman of Smartmatic – but it’s a competitor – not a subsidiary – of Dominion.

Trump: The machines were “turned down by Texas and many others because they were not good or secure.”

Verdict: It’s true that Texas did not provide certification for the machines. Their approach is different to other states.

The US federal government provides guidelines for certifying voting machines – which is meant to produce a common standard across the country.

However, Texas has stipulated additional requirements, which the Dominion machines are unable to satisfy, such as that each ballot has a unique number so it can be traced.

“If you forbid these unique numbers you create a stronger privacy guarantee for the voter. On the flipside, you are compromising a modest security measure,” says Dan Wallach, a computer scientist at Rice University in Texas, and an advisor on national guidelines for voting machines.

The regulations and rules across each state vary significantly, but the US government cyber-security agency has expressed its confidence in voting machines used across the country.

“There is no evidence that any voting system deleted or lost votes, changed votes, or was in any way compromised.”