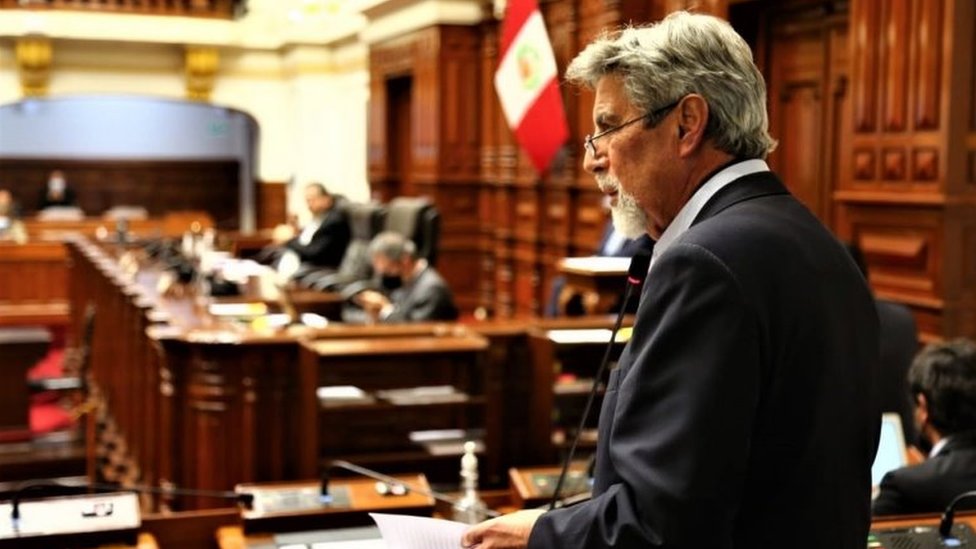 Publishedduration28 minutes agoimage copyrightEPAimage captionFrancisco Sagasti will act as an interim president ahead of next year’s general electionPeru’s Congress has elected a new interim president – the country’s third head of state in under a week. Congressman Francisco Sagasti, a 76-year-old engineer and academic, will lead the country until the presidential election next year. Last…

Peru’s Congress has elected a new interim president – the country’s third head of state in under a week.

Congressman Francisco Sagasti, a 76-year-old engineer and academic, will lead the country until the presidential election next year.

Last week, President Martin Vizcarra was removed over bribery allegations, which he denies – a move sparking protests across the country.

At least two people died and many were injured in the protests.

Mr Sagasti was elected leader after securing the minimum 60 votes required. He belongs to the only party that voted against the impeachment of Mr Vizcarra last week.

“The main thing for Peru is to regain stability and for this nightmare to end,” MP Alberto de Belaunde told Reuters news agency ahead of the vote.

What’s been happening in Peru?

Mr Sagasti has taken over from Manuel Merino, former speaker of Congress, who was in his post for less than a week. He took over as leader following the impeachment of Mr Vizcarra.

Politicians called for Mr Merino’s resignation after a violent crackdown on demonstrations against him.

Tens of thousands of demonstrators – many of them young – have been taking part in protests against Mr Vizcarra’s removal.

They accuse Congress of staging a parliamentary coup. Mr Vizcarra, 57, has enjoyed continued support among many voters for his attempts at reform.

Saturday’s protests in Lima were largely peaceful but clashes broke out in the evening towards police and protesters.

Police reportedly fired tear gas and shotgun pellets to repel demonstrators, some of whom had thrown fireworks and stones.

Two students, Jack Pintado, 22, and Inti Sotelo, 24, were killed in the protests.

Twelve ministers from Mr Merino’s recently appointed cabinet resigned on Sunday in protest against police brutality and his handling of the crisis.

There are concerns of a growing political crisis as Peru faces a severe economic downturn brought on by the coronavirus pandemic.

Peru imposed one of the earliest and strictest lockdowns in Latin America to stop the spread of coronavirus – but has still seen cases rise rapidly.

It has so far reported nearly 935,000 infections and more than 35,000 deaths, according to Johns Hopkins University – making it the country with the third highest rate of deaths per 100,000 people in the world.