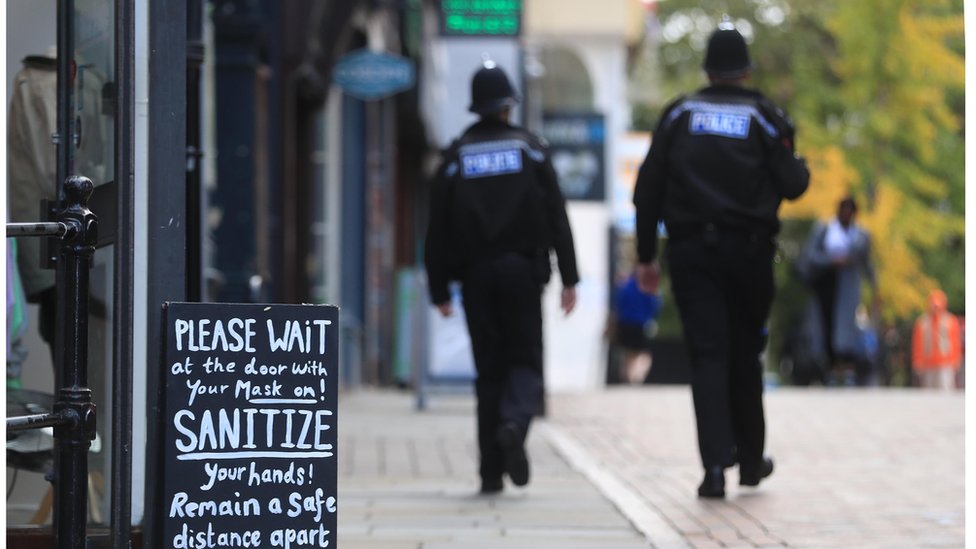 Publishedduration44 minutes agoimage copyrightPA Mediaimage captionUnder the tier system in place before England’s lockdown, areas such as Nottingham saw tougher restrictions than othersThe government is seeking “greater consistency” as it prepares to reintroduce England’s regional Covid tier system next month, the communities secretary has said.Robert Jenrick said ministers were reviewing the measures in each tier.He…

The government is seeking “greater consistency” as it prepares to reintroduce England’s regional Covid tier system next month, the communities secretary has said.

Robert Jenrick said ministers were reviewing the measures in each tier.

He said he expected a conclusion to be reached “within the next week or so”.

The government hopes to introduce tiers again when the national lockdown ends on 2 December.

Mr Jenrick told BBC Breakfast that ministers would look at “whether the measures that we had in the old tiers were effective”.

He pointed out that restrictions had “varied quite a bit in different parts of the country”, with some areas under the strictest level – tier three (very high) – introducing their own rules in addition to baseline measures.

“I think in the new tiers we would like greater consistency, and we will have to look at the evidence to see which of those measures [were] actually the most impactful on the virus, so that we take the most evidence-based approach that we can do,” he said.

“We haven’t come to a conclusion on that yet, to be perfectly honest, but we will be within the next week or so.”

Mr Jenrick said ministers would also look at “whether the new national measures themselves have had an impact and how great an impact that has been”.

“We won’t know that with any certainty until the last week of November,” he said.

He also said it looked as though “a very large proportion of the population” would have access to a vaccine in the first half of 2021, and confirmed that the government did not have plans to make it compulsory.

Asked in the House of Commons whether the government intended to impose tougher restrictions on tier one (medium) areas, Health Secretary Matt Hancock said it was “too early to do the analysis… but of course we remain vigilant”.

Labour’s shadow health secretary Jonathan Ashworth responded that MPs would “soon be asked to make a decision on the future of the lockdown, so the earlier we get that information the better”.

Mr Ashworth’s question to the health secretary came a day after Public Health England’s Susan Hopkins – who is also a member of the government’s scientific advisory group (Sage) – said tier one measures had “very little effect” on the spread of the virus.

Speaking at the government’s evening coronavirus briefing on Monday, she said that, prior to the lockdown, the “tiering of the country” had had a “different effect in each area”.

“Tier three plus” had led to a reduction in cases in the North West, she said, while tier two “holds in some areas and not in others”, depending on “how well individuals are taking that advice in”.

However, she added: “We see very little effect from tier one and when we look at what tiers may be there in the future, we will have to think about strengthening them to get us through the winter months until the vaccine is available for everyone.”

The UK announced another 21,363 daily Covid cases on Monday, as well as a further 213 deaths within 28 days of a positive test.

Before England went into its second lockdown this month, nearly a fifth of the population was living in tier three areas.

Some areas introduced tougher restrictions than others, going beyond the baseline tier three measures.

Last month, police officers told the Home Affairs Select Committee that the tier system made it harder to enforce coronavirus restrictions because of the nuances that had been “creeping in”.