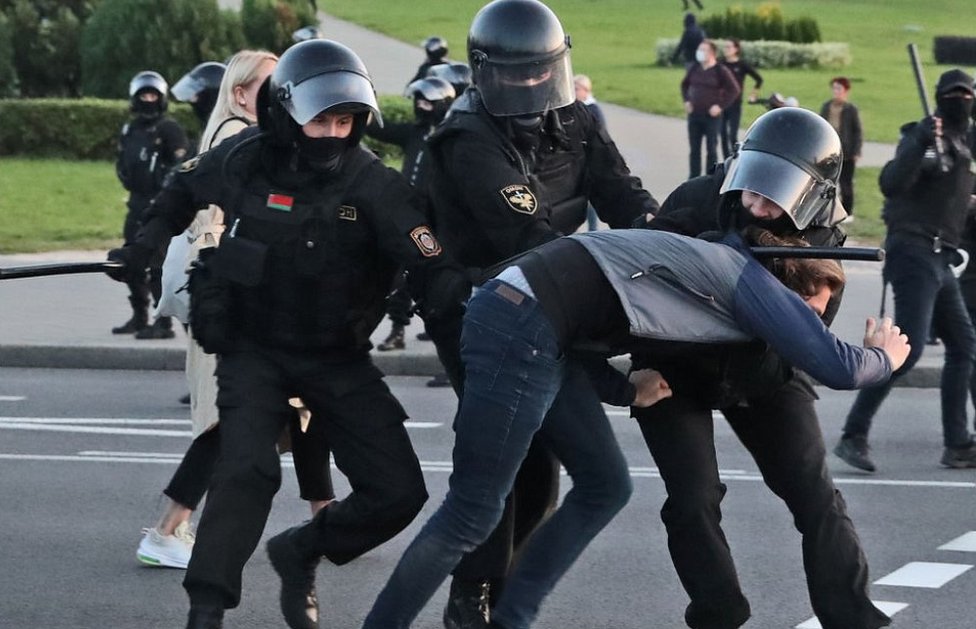 By Abdujalil AbdurasulovBBC NewsPublishedduration7 hours agomedia captionHundreds were arrested at the protest in Minsk on 15 NovemberOpposition protesters remain defiant in Belarus despite police brutality, 100 days after they first took to the streets to denounce the re-election of President Alexander Lukashenko.Police in helmets and body armour throw women holding flowers and balloons into police…

Opposition protesters remain defiant in Belarus despite police brutality, 100 days after they first took to the streets to denounce the re-election of President Alexander Lukashenko.

Yet every Sunday thousands still pour into the streets of the capital Minsk, condemning what they see as Mr Lukashenko’s fraudulent 9 August victory.

Alesya, a 31-year old worker in the IT industry, regularly attends the Sunday rallies. On 15 November, however, things turned nasty very quickly.

When she arrived at the square where the march was supposed to start, it was already packed with security forces. As more people gathered, officers fired stun grenades and started hitting people with batons to disperse the crowd.

“They attacked us again and again. It was awful. They ferociously beat people, twisted their arms and took them away,” she said.

She ran away into courtyards following other protesters, but police in their minivans quickly caught up with them even there. She was saved by a stranger who hid her and several others in his house.

“It felt like World War Two, when people tried to hide Jews from the Nazis. It was terrifying, we were shocked.”

The march was called in memory of Roman Bondarenko, an activist who was beaten in detention and died in hospital last week. He was arrested by men in plain clothes without insignia. Such groups are often seen working with police when they disperse and detain protesters.

After the election, unprecedented demonstrations took place in Minsk and other cities in Belarus – in the capital alone more than 100,000 thronged the streets.

They demanded an end to police violence, the release of all political prisoners and new elections held transparently and fairly.

Initially this people’s tsunami made the police disappear from the streets. But they returned a few weeks later, to spread terror again.

During a recent march, Diana Pchelinkova, an 18-year-old student from Minsk, had one of the most frightening moments of her life. Fleeing from the police, she ran with other protesters into an apartment block, hoping to hide in someone’s flat. One woman opened the door and let them in.

“I was the last one,” Diana said. “I fell at the entrance. They hit my back with batons. We tried to shut the door but they pushed through.”

Officers stormed in and started grabbing men in the flat. They lashed out with batons at those who resisted. Women screamed and raised their hands, begging the police not to take them.

“I was so scared. They took several boys. Women hid the rest. One was behind the sofa. Another one was hiding in a cupboard. The third was on the balcony.”

With continuing police violence the demonstrations have got smaller. The mood has changed too.

“There are fewer opposition flags,” said Vladimir (not his real name), an entrepreneur in Minsk. “The festive atmosphere has gone. Every time you go out to join a protest march, you don’t know whether you’ll be back or not. You’re very nervous.”

Vladimir was badly beaten by riot police in August. He was detained and sent to the notorious Okrestina prison. “They beat us as if they wanted to kill us,” he said. But after leaving prison with bruises covering his back and legs, Vladimir was even more determined to protest.

“If we stop, I see no possibility for living here,” he said. “Then the only option is to leave the country.”

These 100 days of protests have already transformed Belarus. Many now feel they need to act if they want to live in a better country. They include Andrey Pogerilo, a 29-year-old locksmith from Grodno.

Before the August presidential election Mr Pogerilo had never been interested in politics. He was in a cafe when the first clashes took place in Minsk that night.

He went out to see why the crowd had gathered and witnessed scenes that changed his life.

“It was all peaceful. Suddenly savagery started. I saw with my own eyes how a policeman hit a young girl with a baton at least three times. Officers viciously roughed up one guy. That day police wanted to break people, not detain them.”

The next day Andrey Pogerilo joined the protest and he has attended rallies regularly since then.

President Lukashenko, who has been ruler of Belarus for 26 years, claims demonstrators are paid and manipulated by foreign powers. He has called them alcoholics and drug addicts.

The main opposition leaders are either in jail or have fled the country – so they are not leading these marches.

There are now marches of students, doctors, pensioners, people with disabilities.

Actors sing opposition anthems ahead of their theatre performances, to show solidarity with detainees.

These public displays inspire the protesters and show that their movement is not broken.

The authorities try relentlessly to take down opposition posters, only to find new ones there the next day. Police awkwardly climb up fences to remove flags while activists watch and film them.

One slogan which went viral said: “You can repaint the wall, but you cannot repaint your conscience.”

Remarkably, despite the crackdown, the protesters have remained mostly peaceful. Their response to beatings is to turn up at the next rally carrying flowers.

“When you watch the Omon [riot police] and their brutality, you realise that you don’t want to be like them,” said Sviatlana Stankevich, a 32-year-old artist who spent nine days in jail for demonstrating.

“I show my power by persistence, steadfastness and confidence.”

The past 100 days have illustrated how powerful this peaceful approach is.

All that force could not make people love Mr Lukashenko – and he appears to be losing this battle.