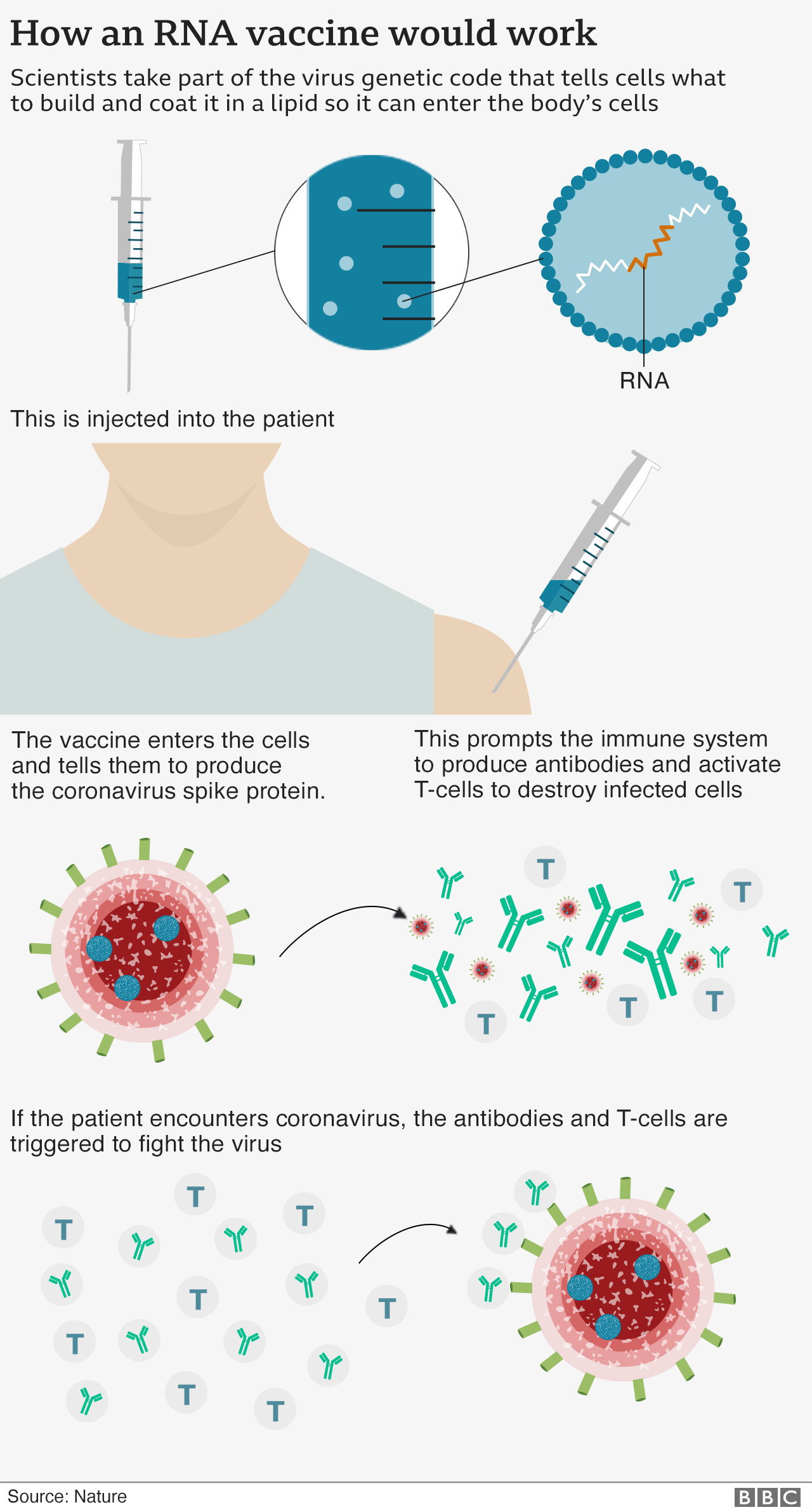 By James GallagherHealth and science correspondentPublishedduration7 minutes agoimage copyrightGetty ImagesA new vaccine that protects against Covid-19 is nearly 95% effective, early data from US company Moderna shows.The results come hot on the heels of similar results from Pfizer, and add to growing confidence that vaccines can help end the pandemic. Both companies used a highly…

A new vaccine that protects against Covid-19 is nearly 95% effective, early data from US company Moderna shows.

The results come hot on the heels of similar results from Pfizer, and add to growing confidence that vaccines can help end the pandemic.

Both companies used a highly innovative and experimental approach to designing their vaccines.

Moderna says it is a “great day” and they plan to apply for approval to use the vaccine in the next few weeks.

However, this is still early data and key questions remain unanswered.

How good is it?

The trial involved 30,000 people in the US with half being given two doses of the vaccine, four weeks apart. The rest had dummy injections.

The analysis was based on the first 95 to develop Covid-19 symptoms.

Only five of the Covid cases were in people given the vaccine, 90 were in those given the dummy treatment. The company says the vaccine is protecting 94.5% of people.

The data also shows there were 11 cases of severe Covid in the trial, but none happened in people who were immunised.

Dr Stephen Hoge, the company’s president, said he “grinned ear to ear for a minute” when the results came in.

He told BBC News: “I don’t think any of us really hoped that the vaccine would be 94% effective at preventing Covid-19 disease, that was really a stunning realisation.”

When will I get it?

That depends on where you are in the world and how old you are.

Moderna says it will apply to regulators in the US in the coming weeks. It expects to have 20 million doses available in the country.

The company hopes to have up to one billion doses available for use around the world next year and is planning to seek approval in other countries too.

The UK has today announced it has secured five million doses of the Moderna vaccine, enough to vaccinate 2.5 million people. It has already outlined plans that prioritise the oldest people for immunisation.

What don’t we know?

We still do not know how long immunity will last as volunteers will have to be followed for much longer before that can be answered.

There are hints it offers some protection in older age groups, who are most at risk of dying from Covid, but there is not full data.

Mr Zaks told the BBC their data so far suggests the vaccine “does not appear to lose its potency” with age.

And it is not known whether the vaccine just stops people becoming severely ill, or if it stops them spreading the virus too.

All these questions will affect how a coronavirus vaccine is used.

Are there any side effects?

No significant safety concerns have been reported, but nothing, including paracetamol, is 100% safe.

Short lived fatigue, headache and pain were reported after the injection in some patients.

“These effects are what we would expect with a vaccine that is working and inducing a good immune response,” said Prof Peter Openshaw, from Imperial College London.

How does this compare to the Pfizer vaccine?

Both vaccines use the same approach of injecting part of the virus’s genetic code in order to provoke an immune response.

The preliminary data we have seen so far is very similar – around 90% protection for the Pfizer/BioNTech vaccine and around 95% for Moderna’s.

However, both trials are still taking place and the final numbers could change.

Moderna’s vaccine appears to be easier to store as it remains stable at minus 20C for up to six months and can be kept in a standard fridge for up to a month.

Pfizer’s vaccine needs ultra-cold storage at around minus 75C, but it can be kept in the fridge for five days.

The Sputnik V vaccine, developed in Russia, has also released very early data which suggests it is 92% effective.

How does it work?

Moderna has developed an “RNA vaccine” – it means part of the coronavirus’s genetic code is injected into the body.

This starts making viral proteins, but not the whole virus, which is enough to train the immune system to attack.

It should train the body to make both antibodies – and another part of the immune system called T-cells to fight the coronavirus.

When will Covid be over?

In the space of a week, the positive results from Pfizer, Moderna and Russia have transformed our chances of ending the pandemic.

Before the first results, the talk was of a vaccine that offered maybe 50% protection. Those expectations have been blown out of the water – not only are vaccines possible, they appear to be potent.

The data so far also raise hopes that the other vaccines in development will be successful too, but now as one challenge draws to an ends, another begins.

The logistical effort of actually vaccinating, potentially billions of people, around the world is gargantuan.

Some experts have claimed normality by spring, others by next winter, others still think there is a long journey ahead.

The answer will depend on how quickly countries can get this “hope in a vial” into the arms of people.

“This news from Moderna is tremendously exciting and considerably boosts optimism that we will have a choice of good vaccines in the next few months,” said Prof Peter Openshaw from Imperial College London.

He added: “We need more complete details than we have in this press release, but this announcement adds to the general feeling of optimism.”

Prof Trudie Lang, from the University of Oxford, said: “It is very good news indeed to see another vaccine coming through with similar efficacy results as were reported last week from Pfizer.

“This is also an interim analysis, which means that there were enough cases within the vaccinated volunteers to give statistical significance and allow the team to break the blind to determine who had the active vaccine and who had placebo.”

Dr Richard Hatchett, the head of the Coalition for Epidemic Preparedness Innovations, said: “The Moderna results are as good as we could have hoped for and really terrifically encouraging.”