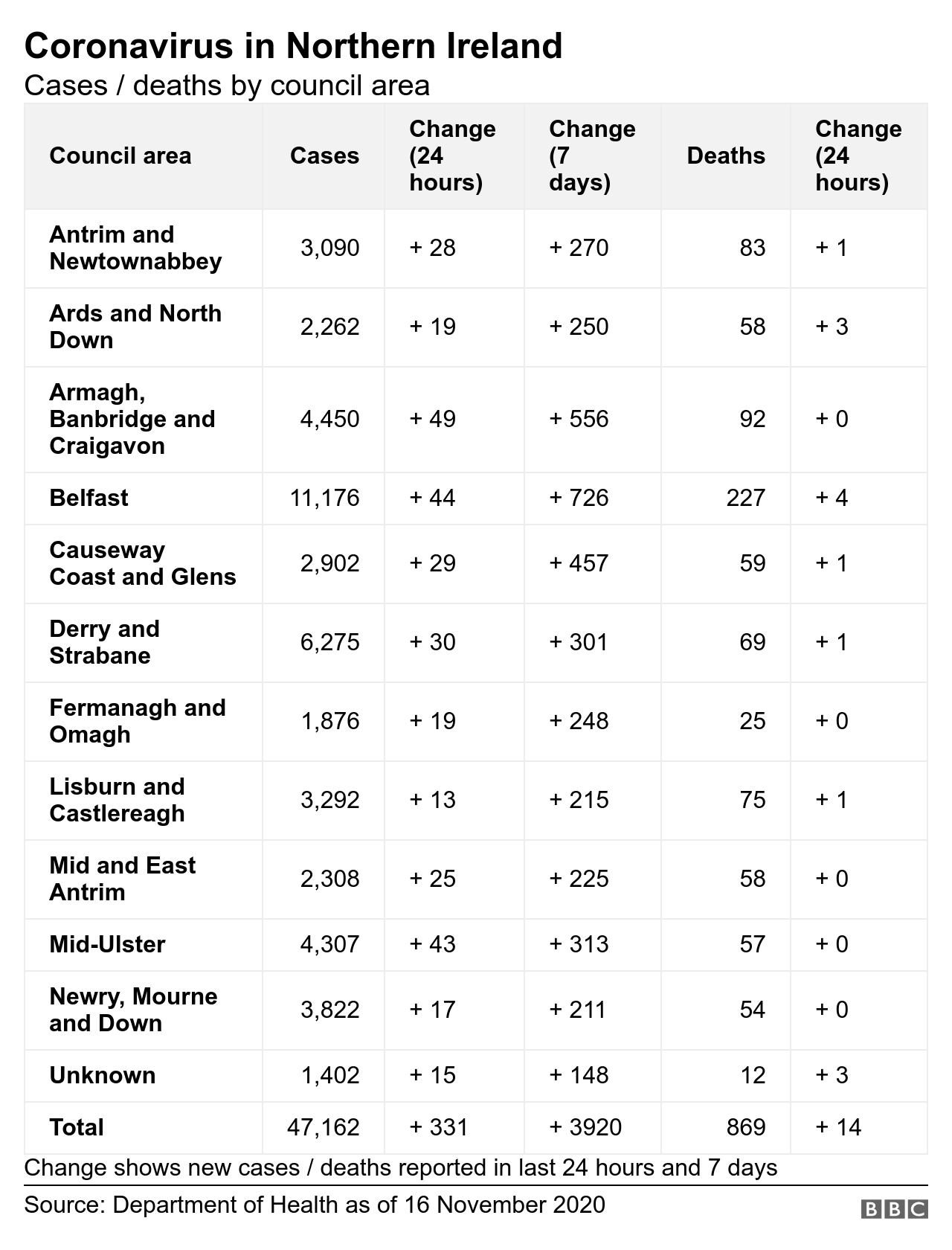 Publishedduration52 minutes agoimage captionChristmas lights were switched on at Belfast City Hall on Saturday, but without the crowds usually in attendance, due to the virusThe executive will do all it can to “protect” as much of the Christmas period as possible, Michelle O’Neill has said.It comes after NI’s chief scientific adviser warned further Covid-19 restrictions…

The executive will do all it can to “protect” as much of the Christmas period as possible, Michelle O’Neill has said.

The deputy first minister said it was difficult to provide certainty but she wanted to give people “some comfort”.

The executive’s “clear commitment” was to secure that, she added.

Some of the current Covid-19 restrictions are due to end on Friday with the reopening of close-contact services and unlicensed hospitality businesses.

That decision was taken by ministers on Thursday, following four days of heated disagreements and delay.

Prof Young has warned that Christmas “cannot be completely normal” as allowing people to interact will increase the risks.

“There would be an option of measures which the executive would need to consider and I think everybody is familiar with what those restrictions look like,” he told BBC’s Good Morning Ulster programme.

“They have to minimise the interactions between people, particularly in indoor settings, in order to reduce transmission of the virus as much as possible.”

A further 331 positive cases have been reported in the last 24 hours.

But speaking in the assembly on Monday, Ms O’Neill said the executive wanted to be able to “give people something, in terms of being able to spend some time with family members”.

“It will be dependent of the virus spread at the time… we should be able to give people a bit of flexibility to allow people to get over the Christmas period,” she said.

The deputy first minister said the R-number – or reproduction value of the virus – in Northern Ireland was now at 0.9, and “perhaps going towards one”.

Any decisions about the Christmas period would have to be taken on the basis of health advice, she said.

Addressing the criticism directed at ministers over the delay in agreeing restrictions, Ms O’Neill said the executive needed to “collectively get a grip”.

The deputy first minister said it was a “matter of profound concern and regret” that the DUP had blocked health proposals by triggering a cross-community vote.

It can be deployed on any issue in the executive, if three or more ministers ask for a vote to be taken on that basis.

It effectively gives parties with enough ministers a veto.

Sinn Féin, the SDLP, Ulster Unionists and Alliance had voted to extend the restrictions – but the DUP’s decision to deploy the cross-community mechanism meant the plan was blocked.

“It should have been the will of the executive which carried it through, but I accept this is now the outworking of the executive, and we’re all duty-bound to communicate the decision to the public,” she added

First Minister Arlene Foster has defended her party’s decision to use the veto.

“We all know those who want to apportion blame and the use of vetoes, but the truth is we should never have gotten to that point,” she told the assembly on Monday.

In other coronavirus-related developments on Monday:

When asked about schools closing early for Christmas, Prof Young said keeping schools open was a top priority for the executive.

However, he said “opening schools will tend to increase the transmission of the virus in the community”.

Simon Hamilton, chief executive of Belfast Chamber, said comments by the health minister and chief scientific adviser on the possibility of further restrictions has a “damaging and demoralising” effect on business owners and staff.

“It makes them worry about whether or not the new dates they’ve been told when they can reopen will actually happen,” he said.

With news potential vaccines that protect against Covid-19 are on the horizon, BBC News NI wants to answer your questions.

We’ll answer your questions with virologist Dr Lindsay Broadbent live on Tuesday at 19:00 here on the BBC News NI, or tune in on BBC iPlayer or the BBC News NI Facebook page.

If you are reading this page on the BBC News app, you will need to visit the mobile version of the BBC website to submit your question on this topic.