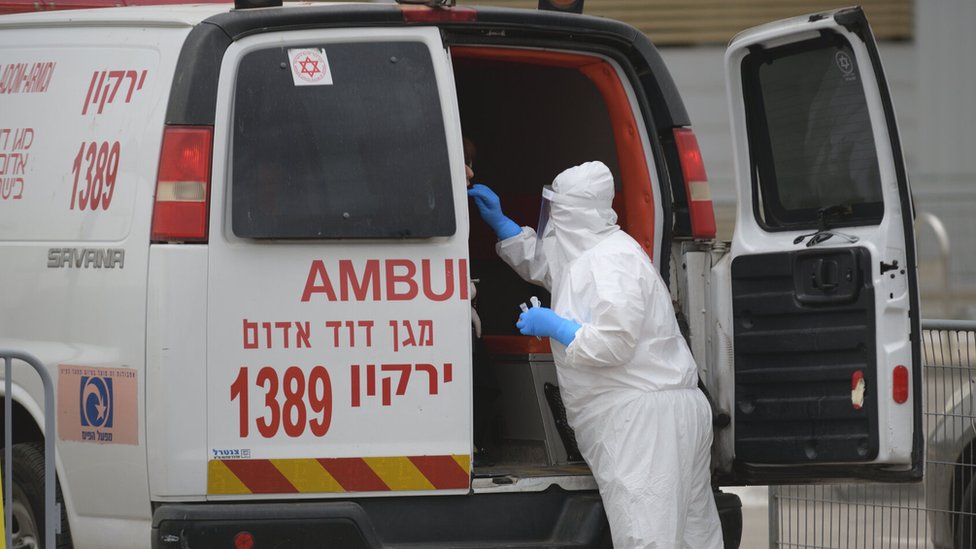 Publishedduration1 hour agoimage copyrightGetty Imagesimage captionThe ambulance service condemned the “severe incident” (file photo)An Israeli ambulance worker caught on camera spitting on portraits of Jesus while visiting a Christian home to carry out a Covid test has been fired.The medic was seen removing protective clothing before spitting on three pictures in the communal hallway of…

An Israeli ambulance worker caught on camera spitting on portraits of Jesus while visiting a Christian home to carry out a Covid test has been fired.

The medic was seen removing protective clothing before spitting on three pictures in the communal hallway of the block of flats in Jaffa in Tel Aviv.

When confronted, the medic claimed the imagery was a form of idolatry forbidden by the Hebrew Bible.

The Magen David Adom (MDA) employee, it said, was “unworthy of representing the organisation” and was dismissed immediately.

The incident happened on Sunday when the medic went to the block – whose residents are all Christian, according to media reports.

Security camera footage shows the worker removing his mask and overalls before turning around and spitting three times in succession.

He is then seen putting his mask back on and getting into a lift.

As he was leaving the building, the medic was confronted by a tenant who filmed their exchange on a mobile phone.

When the tenant asked why he spat at the pictures, the worker replied: “In Judaism this is foreign worship.”

The video shows the tenant remonstrating with the medic, telling him: “You spat on my pictures, which we believe in, in front of my eyes on the camera. Why did you do that?”

The medic replies: “In our Torah it is written that as much foreign worship as possible should be kept away as much as possible,” before complaining to the tenant that he was not wearing a mask.

The incident was reported to MDA, which questioned the medic and fired him.

In a tweet, the ambulance service said it “strongly condemned” what happened, adding that it works with, and employs, members of all religions and sections of society.

serve the organization with dedication. MDA, as Israel’s national emergency medical and blood services organization continues to save lives in all areas at all times.

Israel has experienced one of the highest rates of coronavirus infections in the world and is gradually emerging from a second national lockdown.