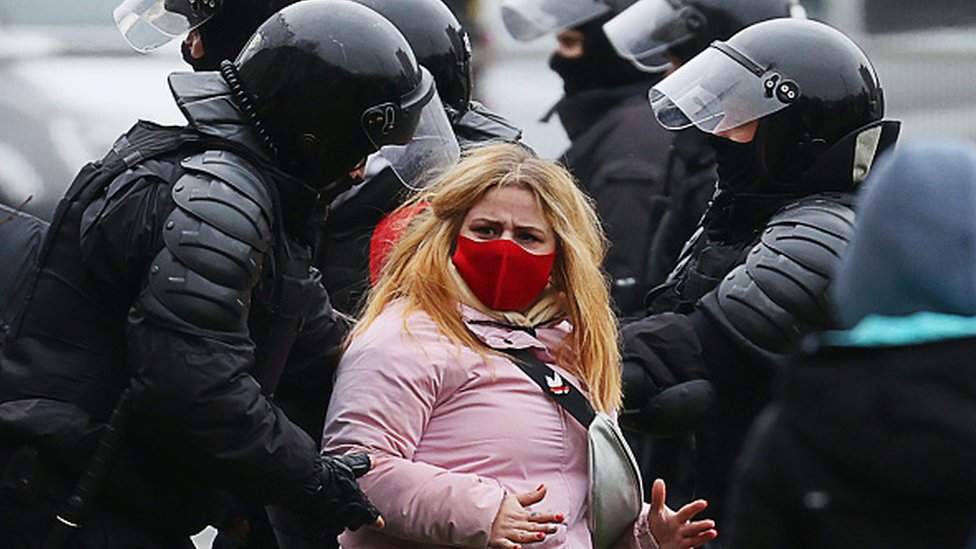 Publishedduration4 hours agoimage copyrightGetty Imagesimage captionProtesters have taken to the streets every week since the August electionMore than 1,000 people have been arrested during fresh demonstrations over the disputed presidential election in Belarus, a human rights group says.The tally from Viasna came after protesters took to the streets in the capital Minsk on Sunday amid…

More than 1,000 people have been arrested during fresh demonstrations over the disputed presidential election in Belarus, a human rights group says.

The tally from Viasna came after protesters took to the streets in the capital Minsk on Sunday amid growing anger over the death of an opposition activist.

He died on Thursday after what protesters believe was a beating by security forces.

Huge crowds have taken part in weekly protests after the country’s long-time leader Alexander Lukashenko said he won the August vote, which was widely viewed as rigged.

As in previous weeks, thousands of people took to the streets of the capital Minsk and other cities on Sunday.

They also laid flowers at the site where protester Roman Bondarenko, 31, was detained before his death earlier this week.

Witnesses say he had scuffled with suspected plain clothes police officers who were attempting to remove demonstrators’ red and white ribbons. The EU described his death as “outrageous and shameful”.

The disputed election in August has led to a months-long political crisis in Belarus.

The main opposition leader, Svetlana Tikhanovskaya, said she had attracted between 60 and 70% of the vote and was forced into exile in neighbouring Lithuania immediately after the election.

But Mr Lukashenko, who has ruled the country for 26 years and is backed by Russian President Vladimir Putin, announced that he had won and refused to resign.

The Belarus opposition has organised huge demonstrations every Sunday since the election, usually with more than 100,000 people thronging the streets of Minsk.

The EU and US government agree with the opposition that the August election was rigged, with brutality meted out to Mr Lukashenko’s opponents.

Mr Lukashenko has ignored repeated opposition calls for negotiations to re-run the election under free and fair conditions, to end police brutality and release political prisoners.

Thousands of demonstrators have been arrested.

The Organization for Security and Co-operation in Europe, which monitors elections, said earlier this month that human rights abuses since the vote had been “found to be massive and systematic and proven beyond doubt”, and called for the official result handing Mr Lukashenko victory to be annulled “due to irregularities at all stages of the process”.

The EU, meanwhile, has added Mr Lukashenko and his son Viktor to its sanctions blacklist of Belarus officials.