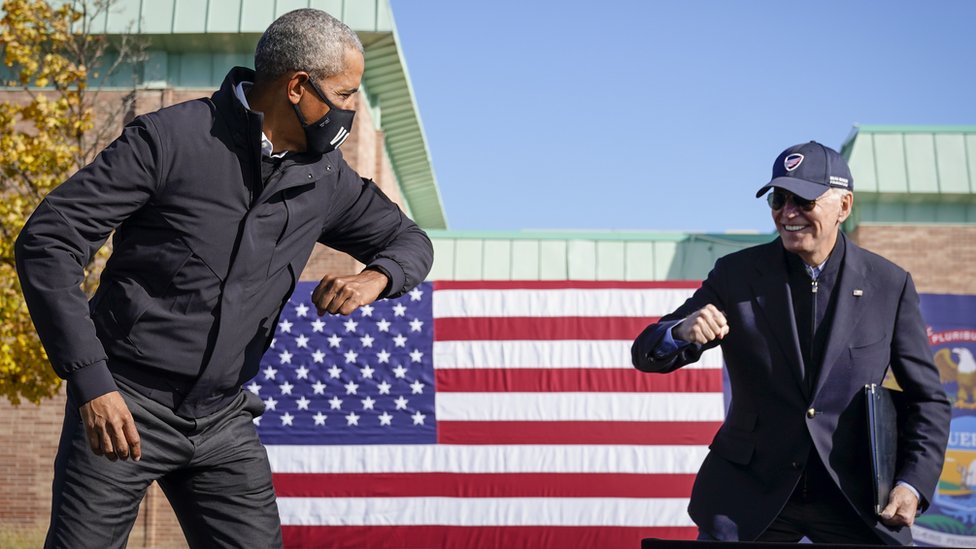 Publishedduration1 hour agomedia captionBarack Obama tells the BBC about the “crazy conspiracies” and “truth decay” in US politicsThe US faces a huge task in reversing a culture of “crazy conspiracy theories” that have exacerbated divides in the country, Barack Obama says.In a BBC interview, the former president says the US is more sharply split than…

The US faces a huge task in reversing a culture of “crazy conspiracy theories” that have exacerbated divides in the country, Barack Obama says.

In a BBC interview, the former president says the US is more sharply split than even four years ago, when Donald Trump won the presidency.

And Mr Obama suggests Joe Biden’s victory in the 2020 US election is just the start of repairing those divisions.

“It’ll take more than one election to reverse those trends,” he says.

Tackling a polarised nation, he argues, cannot be left only to the decisions of politicians, but also requires both structural change and people listening to one another – agreeing on a “common set of facts” before arguing what to do about them.

However he says he sees “great hope” in the “sophisticated” attitudes of the next generation, urging young people to “cultivate that cautious optimism that the world can change” and “to be a part of that change”.

How has division been fuelled in America?

Anger and resentment between rural and urban America, immigration, injustices like inequality and “the kinds of crazy conspiracy theories – what some have called truth decay” have been amplified by some US media outlets and “turbocharged by social media”, Mr Obama tells historian David Olusoga, in an interview for BBC Arts to promote his new memoir.

“We are very divided right now, certainly more than we were when I first ran for office in 2007 and won the presidency in 2008,” the former president says.

He suggests that this is, in part, attributable to Mr Trump’s willingness to “fan division because it was good for his politics”.

Something else that has contributed hugely to the issue, Mr Obama says, is the spread of misinformation online, where “facts don’t matter”.

“I think at some point it’s going to require a combination of regulation and standards within industries to get us back to the point where we at least recognise a common set of facts before we start arguing about what we should do about those facts.”

Mr Obama says that while many conventional mainstream media outlets have embraced fact-checking in recent years in an effort to tackle the spread of misinformation online, it is often not enough because “falsehoods had already circled the globe by the time truth got out of the gates”.

He says division is also a result of socioeconomic factors such as increasing inequality and disparities between rural and urban America.

Such issues, he adds, are “paralleled in the UK and around the world” with “people feeling as if they’re losing a grip on the ladder of economic advancement and so react and can be persuaded that it’s this group’s fault or that group’s fault”.

The problem with misinformation is it’s popular

Viral conspiracy theories have been a staple feature of this year’s US election – and a more mainstream school of thought during the Trump presidency.

That’s because online disinformation with conspiratorial undertones is no longer limited to the dark corners of the internet. It’s promoted by prominent figures, with huge followings – like those in charge across the world, including in the White House.

The polarised world of the internet – where everything is a matter of opinion rather than fact, and we choose our tribe – has created a fertile breeding ground for conspiracies and misinformation. An increasing number of people who use social media to do their own research come to misleading conclusions – these can be exacerbated by one-sided coverage of stories by partisan media.

As Barack Obama points out, these falsehoods or misleading claims – especially when amplified by the media or public figures – prove to be much more popular than any debunk. The solution may not reside in just presenting the facts – as important as that remains. It’s also about understanding why people turn to conspiracies online and how they were exposed to them repeatedly.

I frequently speak to victims of online conspiracy theories about the damage they bring, and the divisions they cause. That has revealed how difficult and complex this damage is to undo.

What about Black Lives Matter and race?

Mr Obama, who made history as America’s first black president, says the issue of race has been “one of the central fault lines in American history – our original sin”.

The events that unfolded over the summer, including the death of George Floyd – a black man who died in police custody – and the response to his death from communities not just in the US but around the world, created moments of both despair and optimism, he says.

“Despair that the chronic lingering role of race and bias in our criminal justice system continues in such a blatant form… enormous optimism that you saw an outpouring of protest activism and interest that far exceeded anything we had seen previously – and was peaceful.”

It was important that the protests were multi-racial, he says, adding that the response was different to that of the killing in 2012 of Trayvon Martin, an unarmed Florida teenager who was shot dead by neighbourhood watch volunteer George Zimmerman. Mr Zimmerman was later cleared of the 17-year-old’s murder in a high-profile criminal case.

He says that while those incidents inflamed passions across America, stirring up debate over race and justice, there still appeared to be “resistance among large portions of the white community to push back against the notion that this was more than just one incident or a case of bad apples”.

“What you saw this summer was some communities that had a very negligible black population, folks going out there and saying Black Lives Matter and embracing the notion that real change has to come.”

Mr Obama was speaking ahead of the release of his new memoir, A Promised Land, which charts his rise to the US Senate and first term as president. Due for release on 17 November, it is the first of two books covering his time in the White House.

You can see the full interview in a special programme, Barack Obama talks to David Olusoga, this Wednesday on BBC One in the UK at 1930 GMT or internationally from Saturday 21 November on BBC World News.