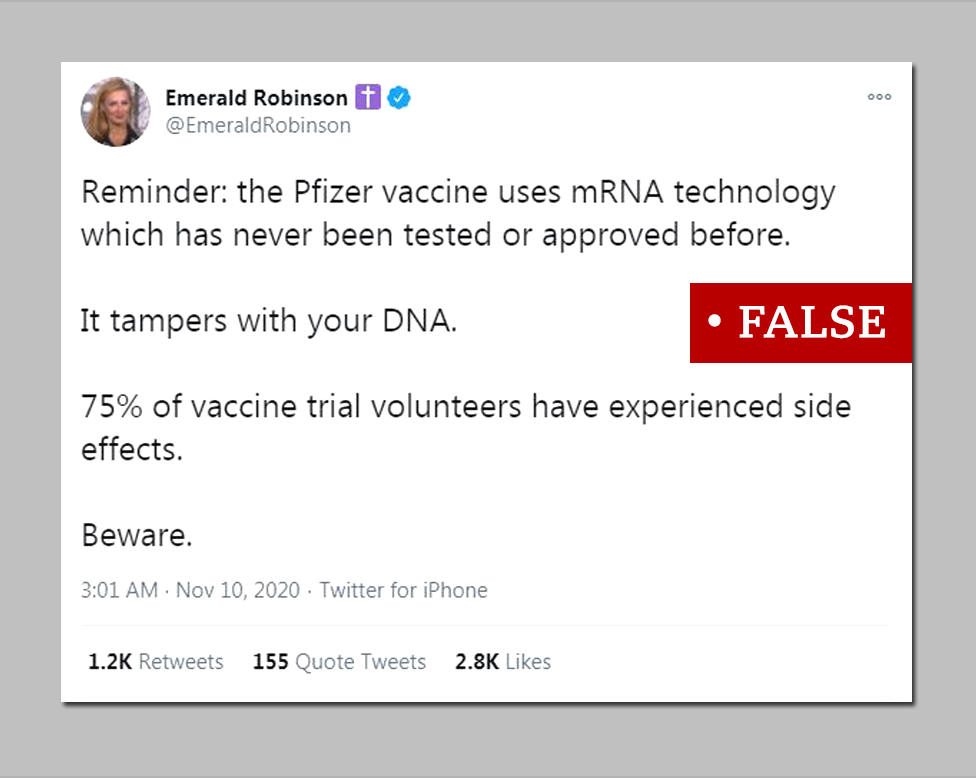 By Flora CarmichaelBBC Reality CheckPublishedduration38 minutes agoimage copyrightGetty ImagesNews of a vaccine which prevented 90% of people from getting Covid-19 in clinical trials led to a surge of anti-vaccine rumours on social media.We’ve looked into some of the most widely shared false claims: about alleged plots to put microchips into people, the supposed re-engineering of…

News of a vaccine which prevented 90% of people from getting Covid-19 in clinical trials led to a surge of anti-vaccine rumours on social media.

We’ve looked into some of the most widely shared false claims: about alleged plots to put microchips into people, the supposed re-engineering of our genetic code, and about safety.

Bill Gates was trending on Twitter this week following the vaccine announcement.

The billionaire founder of Microsoft has been the subject of many false rumours during the pandemic.

He’s been targeted because of his philanthropic work in public health and vaccine development.

One of the most shared claims this week – one that has been circulating since early this year – is that the coronavirus pandemic is a cover for a plan to implant tiny trackable microchips in people and that Mr Gates is behind it all.

There is no evidence to support these claims and the Bill and Melinda Gates Foundation has told the BBC they’re entirely false.

Despite the lack of evidence, in May a YouGov poll of 1,640 people suggested 28% of Americans believed Mr Gates wanted to use vaccines to implant microchips in people – with the figure rising to 44% among Republicans.

A White House correspondent for a pro-Trump website, Newsmax, told her 264,000 followers on Twitter to “beware” the Pfizer/BioNTech vaccine. Emerald Robinson claimed in the Tweet: “It tampers with your DNA.”

The fear that a vaccine will somehow change your DNA is another one we’ve seen aired regularly on Facebook posts.

The BBC asked three independent scientists about this. They said that the coronavirus vaccine would not alter human DNA.

It appears the people spreading such claims have a fundamental misunderstanding of genetics.

The vaccine contains a fragment of the virus’s genetic material – or RNA.

“Injecting RNA into a person doesn’t do anything to the DNA of a human cell,” said Prof Jeffrey Almond of Oxford University.

Pfizer spokesperson Andrew Widger said the company’s vaccine “does not alter the DNA sequence of a human body. It only presents the body with the instructions to build immunity”.

This isn’t the first time we’ve looked into claims that a coronavirus vaccine will alter DNA. We investigated a popular video spreading the theory back in May.

Part of the misunderstanding seems to stem from the type of vaccine being developed. The Pfizer/BioNTech vaccine uses messenger RNA, or “mRNA”, technology.

It works by giving the body instructions to produce a protein which is present on the surface of the coronavirus.

The immune system then learns to recognise and produce antibodies against the protein.

Ms Robinson’s tweet included the assertion that mRNA vaccine technology “has never been tested or approved before”.

It is true that no mRNA vaccine has been approved before, but multiple studies of mRNA vaccines in humans have taken place over the last few years.

Prof Almond says that the Pfizer/BioNTech vaccine is the first to show the efficacy that would be needed in order to be considered for licensing.

Just because it’s a new technology, he says, “it doesn’t mean we should be afraid of it”.

New vaccines undergo rigorous safety checks before they can be recommended for widespread use.

In Phase 1 and Phase 2 clinical trials, vaccines are tested in small numbers of volunteers to check they are safe and to determine the right dose. In Phase 3 trials they are tested in thousands of people to see how effective they are. The group who received the vaccine and a control group who have received a placebo are closely monitored for any adverse reactions – side-effects. Safety monitoring continues even after a vaccine is licensed.

Claire Wardle, author of a recent report about vaccine myths on social media, says there is a “data deficit” around topics like mRNA technology – a situation where there is high demand for information, but credible information is in low supply.

“While credible information struggles to meet the demand, unreliable individual accounts and alternative news outlets are able to drive down confidence in vaccines,” she says.

Another claim in Ms Robinson’s tweet was among the most widely shared anti-vaccine themes this week.

She claimed 75% of vaccine trial volunteers had experienced side-effects. But Pfizer and BioNTech have reported no serious safety concerns in their trial.

Many vaccines do have side-effects. But the vast majority are not nearly as scary as anti-vaccine activists would have us believe.

“Like all vaccines, this vaccine can cause short-lived side-effects, including pain at the injection site, fever, muscle aches and pains, headache and fatigue,” said Dr Penny Ward, a visiting professor in pharmaceutical medicine at King’s College London.

Prof Ward pointed out that these kinds of side-effects are also experienced by a high number of people receiving the annual flu vaccination. The side-effects are usually mild, wear off after a couple of days at most, and can be alleviated with paracetamol or ibuprofen.

It’s unclear where Ms Robinson gets the 75% figure from, but it may have selectively been chosen from the rate of mild side-effects reported in one age group in an earlier phase of the trial.

Full data about side-effects has not yet been published for the most recent phase of the trial, but Pfizer has confirmed they observed no serious side-effects.

The BBC contacted Emerald Robinson for comment, and she stood by her claims.