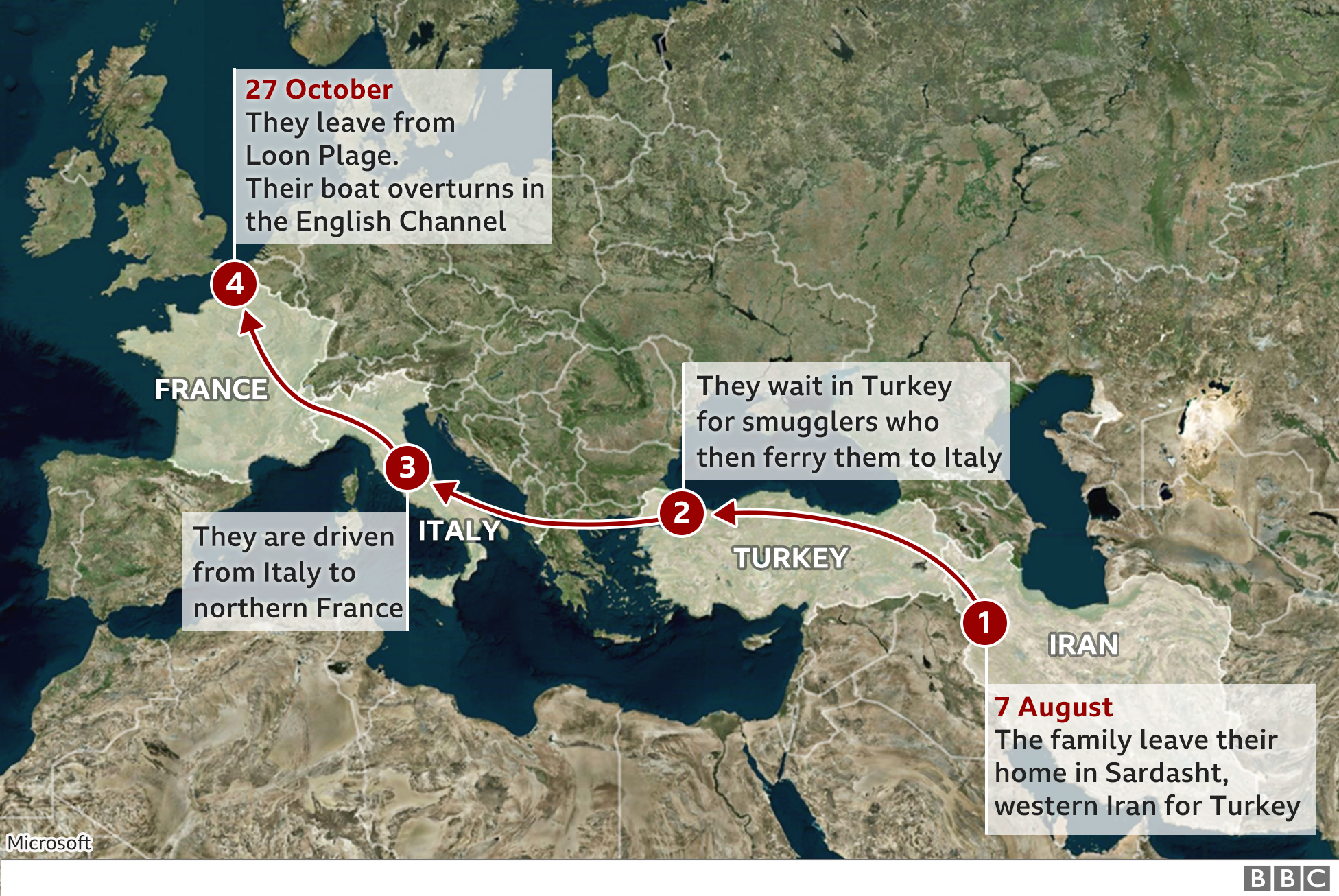 By Jiyar GolBBC PersianPublishedduration1 hour agoimage copyrightFamily handoutA video clip of a Kurdish-Iranian girl who died with her family attempting to cross the English Channel last month highlights their drive for a better life. The clip shows a nine-year-old girl crying and laughing. “My name is Anita Iranejad, I am from Sardasht,” she says.It is…

A video clip of a Kurdish-Iranian girl who died with her family attempting to cross the English Channel last month highlights their drive for a better life.

The clip shows a nine-year-old girl crying and laughing. “My name is Anita Iranejad, I am from Sardasht,” she says.

It is a screen test for a short film to be shot in her hometown. In the background, her father Rasoul Iranejad can be heard gently prompting her: “I would like to be an actress… say it.”

The video suggests not just paternal pride, but ambition. Rasoul wants his daughter to achieve her dream. But that is a tall order for a little girl from this impoverished and politically oppressed region. The family are from Sardasht, a small, predominantly Kurdish city in western Iran

A year after the screen test, Rasoul, his wife Shiva Mohammad Panahi, and their three children Anita, six-year-old Armin and baby Artin, 15 months, embarked on a dangerous journey to Europe.

But the family’s hopes for their future were brought to a brutal end in the English Channel on 27 October. A small boat heading to the UK in rough conditions capsized just a few kilometres into its journey. Shiva and the children were trapped without life jackets inside the cabin.

Rasoul, 35, left Iran with his family in early August. Relatives did not want to comment directly on why they left, but there are many reasons why they might have wanted to start again somewhere else.

Sardasht, in west Azerbaijan province close to the border with Iraq, is a difficult place to realise any ambition beyond sheer survival. With little significant industry, it has one of the highest unemployment rates in the country, and holds few prospects for its predominantly ethnic Kurdish population. Many are forced to resort to smuggling goods over the border into Iraqi Kurdistan. This is neither profitable – they earn less than $10 a trip – nor safe.

In the past few years, hundreds of them have been shot dead or injured by Iranian border guards. Many have fallen to their deaths from the rough mountainous terrain or been buried by avalanches in winter.

The region is also heavily militarised. Since the 1979 Iranian revolution, there has been conflict between Iranian security forces and armed Kurdish groups fighting for their rights. Iran labels them separatists backed by foreign powers.

Some 10% of Iran’s population of 82 million are Kurds, and yet they make up more than half of the country’s political prisoners, according to the UN.

There was a brutal crackdown from the authorities during and in the aftermath of anti-government protests in Iran last year, which exploded in the predominantly Kurdish towns on the western border with Iraq, as well as on the outskirts of Iran’s major cities.

A friend of Shiva’s told the BBC that Rasoul, 35, wanted to escape persecution.

She says that Shiva sold everything they had and borrowed money from friends and family to pay smugglers to take them to Europe. They wanted to get to the UK, which is a popular choice for Kurdish asylum seekers. They believe the UK takes a relatively small number of refugees, compared with other European countries, so they will have better prospects there.

Their first stop was Turkey. A video clip shared with the BBC by Rasoul’s friends shows him singing in Kurdish, while the family waits for smugglers to take them to Europe.

“There is pain [in] my heart, huge sadness … but what can I do, I have to leave my Kurdistan and go…,” he sings, his son Armin laughing in delight. His baby Artin toddles towards him and sits on his knee.

There is a famous saying among the Kurds: “We have no friends other than mountains.” After the end of World War One, and the collapse of the Ottoman empire, the Kurds were promised independence by victorious allied powers, but the regional powers never accepted that deal – instead their homeland was eventually divided among the new nations of the Middle East. Since then, any moves by Kurds in Iran, Turkey, Syria and Iraq to set up an independent state have been quashed.

It used to be the case that Turkey was the final destination for thousands of Iranian refugees, but in the past seven years the political climate has meant this is no longer a viable choice.

There are reports from migrants that Turkish security forces have abused Kurdish refugees in police stations or deported them to Iran upon arrival. There have even been a number of political assassinations and kidnappings of Iranian dissidents in Istanbul.

So Rasoul and Shiva would have been keen to move on.

In September they found a smuggler and paid 24,000 Euros [$28,243] to be ferried from Turkey to Italy, and then taken by lorry to northern France.

Charlotte Decanter, a volunteer for the Adra charity in the coastal city of Dunkirk, says she met Shiva while distributing food at Grande-Synthe, the main camp for Kurdish migrants and refugees.

She was struck by her vivacity.

“A small woman, very kind, very sweet. I said a few words in Kurdish. She laughed a lot. She was stunned.”

But somewhere along their journey in France disaster had struck. Shiva and Rasoul were robbed of their possessions.

In texts Shiva sent on 24 October to a friend in Calais, she acknowledges the journey by boat will be hazardous, but says they don’t have the money for a lorry trip.

“I know it’s dangerous but we have no choice,” she texts.

She makes it clear how desperate she is to find refuge.

“I have a thousand sorrows in my heart and now that I have left Iran I would like to forget my past.”

A friend of Rasoul’s who travelled with the family to France says that on the evening of 26 October the smuggler in Dunkirk said it was time to make the crossing the next day.

They left in the early morning from a beach called Loon Plage, a desolate spot next to an oil depot.

The weather was extremely rough, with gusts of wind up to 30km per hour and waves about 1.5m high. The friend, who calls himself Aware, decided it wasn’t worth the risk.

“I was scared, I refused to go,” says Aware. “I begged Rasoul that he shouldn’t go either. But he said he had no choice.”

Rasoul paid the smugglers around £5,500, according to relatives in Iran.

Ebrahim Mohammadpour, a 47-year-old actor and documentary filmmaker from Sardasht, who was also on the boat with his brother Mohammad, 27, and his 17-year-old son, says the craft was only 4-4.5 metres long and designed for eight people, not the 23 that were crammed on to it.

“Honestly we were totally blind because we [had already] suffered so much in this journey,” says Ebrahim. “First you think, ‘I don’t want to get on the boat,’ but then you say, ‘I will board just to leave this misery.”

Yasin, a 16-year-old who was also on the boat, says only he and two others – no-one in Rasoul’s family – were wearing life jackets. The 22 passengers were all Kurds from Sardasht, and the pilot was a refugee from northern Iran, they say.

Iranian migrants who have previously made the journey to the UK tell me smugglers usually ask the passenger who has the least money to drive the boat.

Shiva and the children went into the glass-partitioned cabin, which would have seemed warmer and safer. But it turned out to be deadly.

After around eight kilometres, the boat filled with water, according to Ebrahim.

His brother Mohammad says the passengers began to panic, lurching from one side of the vessel to the other, before the boat suddenly capsized.

It’s difficult to establish exactly what happened next, as the accounts of survivors are confused.

All say that initially at least, Shiva and her children were trapped in the cabin.

Ebrahim says that Rasoul dived under the water to try and rescue them, and came up again to cry for help.

Peshraw, a university student, says he tried to break the glass of the cabin with a carpet cutter but was unable to even crack it. He says that he saw baby Artin floating inside.

Shiva’s brother Raso told us he heard Rasoul managed to pull Artin out, then went inside for the others.

Ebrahim sobs as he recalls the moment he saw Anita floating in the water, and managed to grab her.

“I held the child in the water. I thought she might be alive. With one hand I was holding onto the boat and with another, I was holding the child. I kept shaking her to see if she was alive but there was no response,” he says.

“I can’t forgive myself,” he cries.

Rasoul emerged from the boat moaning, and crying out the names of his family, according to Ebrahim’s brother Mohammed, and then just let himself be taken by the waves.

A passing sailing boat raised the alarm at 0930 local time, and began to help those in the water, according to the French authorities. The first rescue ship arrived 17 minutes later, they say.

The authorities say that some people were taken out of the water in cardiac arrest, but will not go into details.

The survivors we spoke to believe Rasoul, Shiva, Anita and Armin had already died. Fifteen other people were taken to hospital. Baby Artin is still missing, presumed dead. Yasin says he saw him swept away in the water.

An Iranian man accused of being the captain of the boat has appeared before an investigating judge in France and is set to faces charges of manslaughter.

Shiva’s brother and sister, who both live in Europe, travelled to a morgue in Dunkirk to identify the bodies, and were hoping to repatriate them on Friday.

At least 10 people have died while attempting this since 2019.

Most of the asylum seekers come from Iran.

Refugee charities and French politicians argue that would-be asylum seekers should be allowed to apply for sanctuary before they arrive in Britain.

Ebrahim says the survivors have nightmares.

Despite this, Yasin says he will try again to cross the Channel.

“Everyone was sad, I was very scared too. But I just want to be in a safe place. I will try again.”