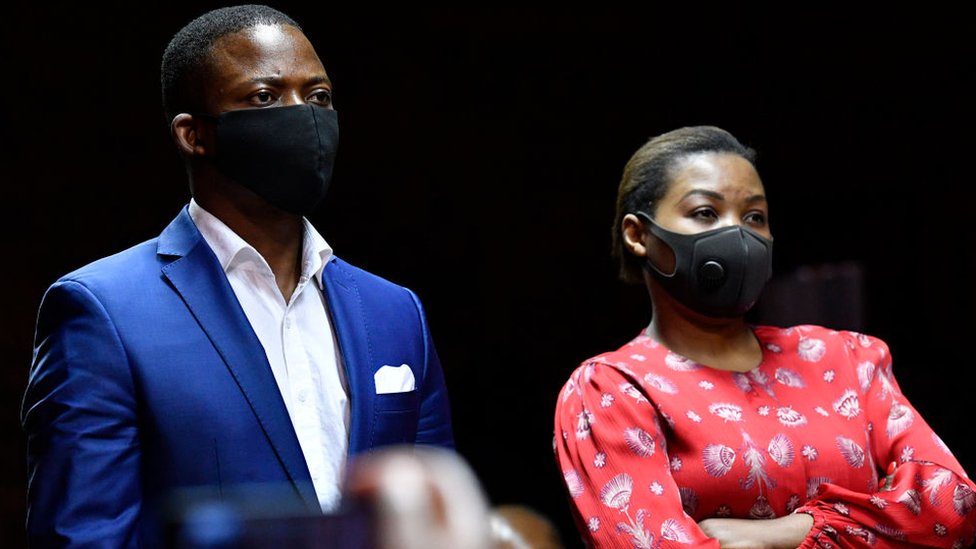 Publishedduration1 hour agoimage copyrightGetty Imagesimage captionShepherd Bushiri and his wife Mary were granted bail at the beginning of NovemberA well-known Christian preacher has skipped bail in South Africa and fled the country.Shepherd Bushiri, who had previously said he wanted to clear his name, has now returned to him home country, Malawi, with his wife Mary.…

A well-known Christian preacher has skipped bail in South Africa and fled the country.

Shepherd Bushiri, who had previously said he wanted to clear his name, has now returned to him home country, Malawi, with his wife Mary.

Earlier this month they were released on bail after being charged with fraud and money laundering.

He said there had been attempts on his life and he accused the South African authorities of not offering protection.

Mr Bushiri described his decision to skip bail as “a tactical withdrawal meant to preserve lives” while speaking to supporters on social media on Saturday.

Observers fear the issue could cause a diplomatic spat between Malawi and South Africa – as questions are being asked about how Mr Bushiri and his wife managed to leave.

There had been allegations that Mr Bushiri fled on Malawi’s presidential jet with President Lazarus Chakwera – something that has been denied by both Mr Chakwera’s office and the South African authorities.

There are also questions over whether the two countries will co-operate over bringing the couple back to South Africa.

The South African government announced on Sunday that they have started the process to bring the couple back from Malawi “to ensure that the two fugitives face justice”.

The statement made a point to mention that Malawi and South Africa have already promised each other to send back fugitives, as part of the Southern African Development Community (SADC) protocol on extradition.

But when Malawi’s Foreign Affairs minister Eisenhower Mkaka was asked previously, he wouldn’t be drawn on the issue.

He told the BBC’s Nomsa Maseko that it is the duty of the government to protect all Malawians but added that President Chakwera is a staunch advocate of the rule of law and that all diplomatic channels will remain open.

Who is Shepherd Bushiri?

Controversial millionaire preacher Mr Bushiri has been referred to as one of the richest religious leaders in Africa.

He says he has cured people of HIV, made the blind see, changed the fortunes of the impoverished and, on at least one occasion, appeared to walk on air.

He grew up in Mzuzu, a city in northern Malawi and moved to Pretoria in South Africa where he leads his church – the Enlightened Christian Gathering.

He is so popular that he has been known to fill sports stadiums with followers.

But he has also been accused of preying on poor people, desperate to improve their lives, by selling merchandise including “miracle oil”.

The authorities in Botswana shut down his church after it claimed that money could be summoned out of nothing, which contravened financial regulations.

What is he accused of?

Mr Bushiri is accused of money laundering and fraud along with his wife and two others.

How far along is his trial?

He appeared at Pretoria’s Magistrates Court on 21 October to hear the charges and was granted bail on 4 November.

The trial is expected to start in May.