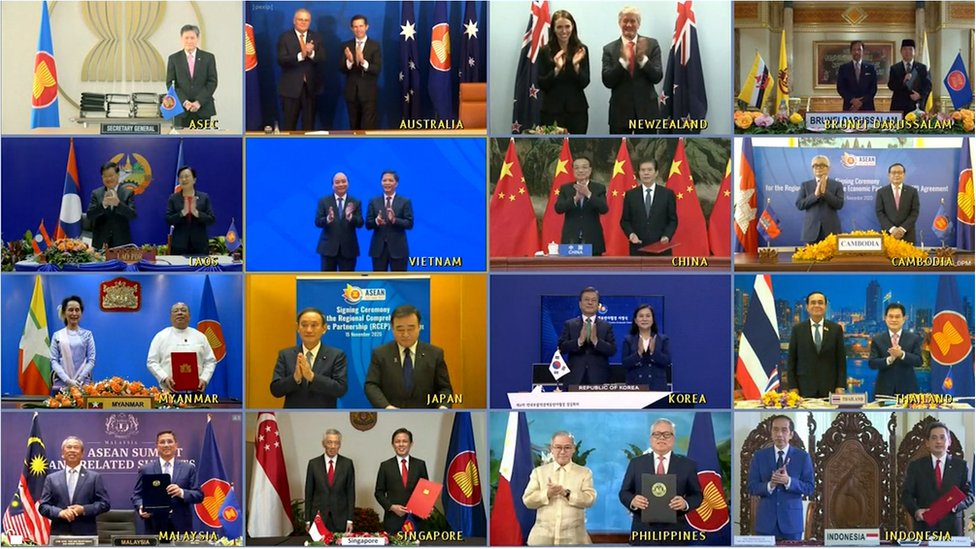 The Regional Comprehensive Economic Partnership (RCEP) is made up of 10 Southeast Asian countries, as well as South Korea, China, Japan, Australia and New Zealand.

The pact is seen as an extension of China’s influence in the region.

The deal excludes the US, which withdrew from a rival Asia-Pacific trade pact in 2017.

President Donald Trump pulled his country out of the Trans-Pacific Partnership (TPP) shortly after taking office. The deal was to involve 12 countries and was supported by Mr Trump’s predecessor Barack Obama as a way to counter China’s surging power in the region.

Negotiations over the RCEP began in 2012. The deal was signed on Sunday on the sidelines of a meeting of the Association of Southeast Asian Nations (Asean), hosted by Vietnam.

“I am delighted to say that after eight years of hard work, as of today, we have officially brought RCEP negotiations to a conclusion for signing,” said Vietnam’s Prime Minister Nguyen Xuan Phuc.

Officials took turns signing copies of the agreement and showing them off on camera at the virtual summit.

Leaders hope that the deal will help to spur recovery from the coronavirus pandemic.

“Under the current global circumstances, the fact the RCEP has been signed after eight years of negotiations brings a ray of light and hope amid the clouds,” said Chinese Premier Li Keqiang.

Mr Li described the agreement as “a victory of multilateralism and free trade”.

India was also part of the negotiations, but it pulled out last year over concerns that lower tariffs could hurt local producers.

Signatories of the deal said the door remained open for India to join in the future.

Members of the RCEP make up nearly a third of the world’s population and account for 29% of global gross domestic product.

The new free trade bloc will be bigger than both the US-Mexico-Canada Agreement and the European Union.

What will RCEP do?

The RCEP is expected to eliminate a range of tariffs on imports within 20 years.

But it’s possible the new “rules of origin” – which officially define where a product comes from – will have the biggest impact.

Already many member states have free trade agreements (FTA) with each other, but there are limitations.

“The existing FTAs can be very complicated to use compared to RCEP,” said Deborah Elms from the Asian Trade Centre.

Businesses with global supply chains might face tariffs even within an FTA because their products contain components that are made elsewhere.

A product made in Indonesia that contains Australian parts, for example, might face tariffs elsewhere in the Asean free trade zone.

Under RCEP, parts from any member nation would be treated equally, which might give companies in RCEP countries an incentive to look within the trade region for suppliers.