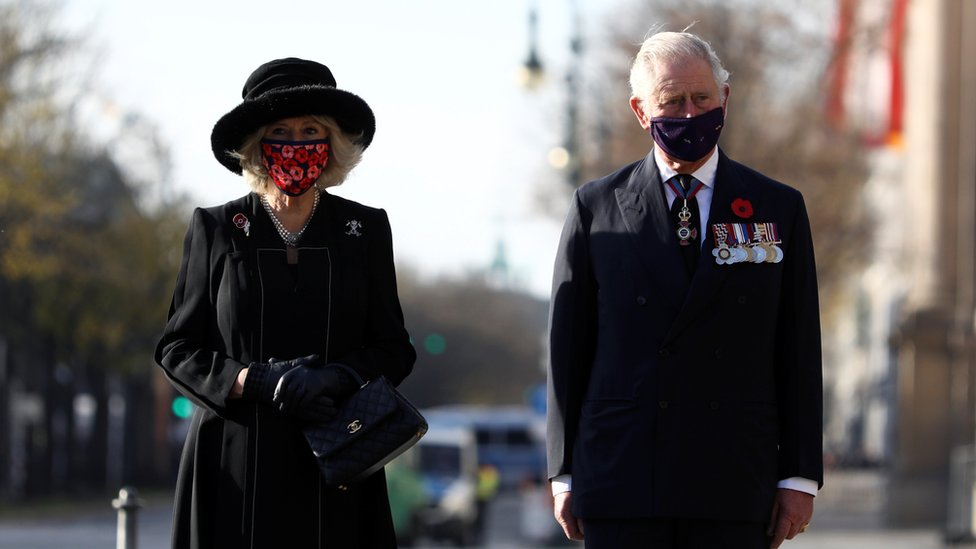 Publishedduration1 hour agoThe Prince of Wales has spoken of the “enduring connections” between the UK and Germany as negotiators prepare for post-Brexit trade talks to continue.Prince Charles said though politicians were discussing the “shape” of the countries’ relationship, their “fundamental bond” would remain strong.His wife, Camilla, has joined him on their first official overseas visit…

The Prince of Wales has spoken of the “enduring connections” between the UK and Germany as negotiators prepare for post-Brexit trade talks to continue.

Prince Charles said though politicians were discussing the “shape” of the countries’ relationship, their “fundamental bond” would remain strong.

His wife, Camilla, has joined him on their first official overseas visit since the start of the Covid pandemic.

Earlier, they attended a wreath-laying ceremony at a memorial in Berlin.

Prince Charles and the Duchess of Cornwall are the first members of the Royal Family to attend the ceremony at the Bundestag, the German parliament, in Berlin, marking the country’s National Day of Mourning for victims of war.

The prince told those gathered: “The United Kingdom has chosen a future outside the European Union, and the relationship between our countries is evolving once again.

“Its shape is a matter negotiated between our governments and its essence is defined by the enduring connections between our people.

“It is, therefore, my heartfelt belief that the fundamental bond between us will remain strong: we will always be friends, partners and allies.

“As our countries begin this new chapter in our long history, let us reaffirm our bond for the years ahead.”

The speech comes 75 years after the end of World War Two and as post-Brexit trade talks are reaching their crucial final stages.

Referring to the English poet John Donne, who wrote that “no man is an island”, the heir to the throne said: “One might equally submit that no country is really an island either, other than in the wholly literal sense.

“Our histories bind us tightly together and our destinies, although each our own to forge, are interdependent to a considerable degree.”

Earlier on Sunday, Prince Charles and the Duchess of Cornwall were welcomed to Germany by President Frank-Walter Steinmeier and his wife Elke Budenbender on the steps of the Bellevue Palace in Berlin.

The four then travelled to the Neue Wache Central Memorial, dedicated to victims of war and tyranny, where a wreath had been laid on behalf of the prince in front of a sculpture titled Mother With Her Dead Son.

The sculpture was designed by German artist Kathe Kollwitz in memory of her own son who died in World War One.

Prince Charles briefly touched the wreath before joining the president and four other German dignitaries in a silence as a trumpet solo echoed through the building.

The message on the prince’s poppy wreath read: “In everlasting remembrance of all victims of conflict and tyranny. Charles.”

Camilla then laid a posy featuring rosemary for remembrance and olive, white daisies and nerines for peace.

The prince, who celebrated his 72nd birthday on Saturday, was presented with a birthday cake during the flight.

The Royal Family have carried out a number of European visits since the UK voted to leave the EU in 2016.

And when his son, the Duke of Cambridge, visited the country in 2016, William said the depth of Britain’s friendship with Germany would not change after the UK left the EU.

Ahead of his trip, the Prince Charles held a telephone meeting with German Chancellor Angela Merkel.