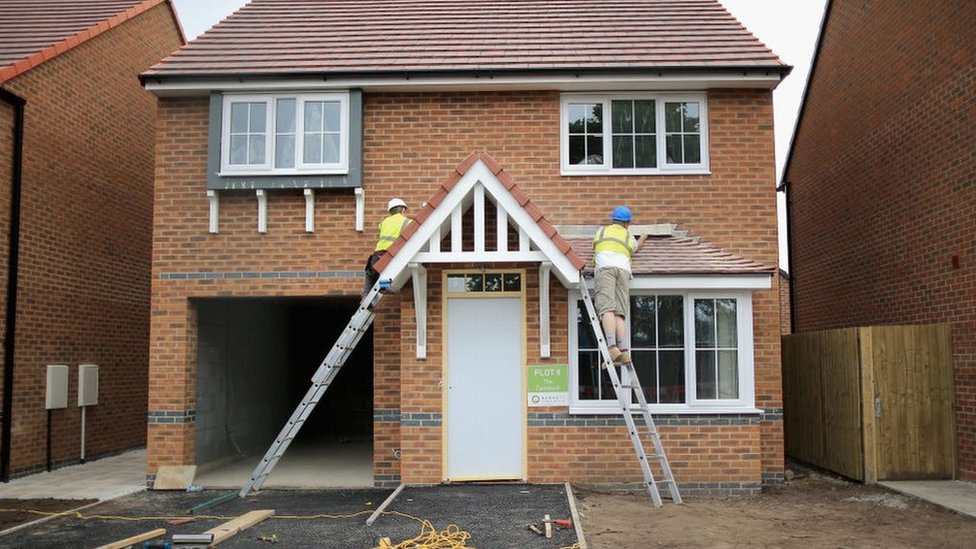 By Jessica ParkerBBC political correspondentPublishedduration7 hours agoimage copyrightGetty ImagesThe government is set to revise its proposals for controversial planning reforms in England, after new housing targets prompted a backlash amongst some senior Conservative MPs Ministers have proposed updating the formula for where to build houses to meet its aim of delivering more homes.But some said…

The government is set to revise its proposals for controversial planning reforms in England, after new housing targets prompted a backlash amongst some senior Conservative MPs

Ministers have proposed updating the formula for where to build houses to meet its aim of delivering more homes.

But some said the “mutant algorithm” will fail to “level up” the North and see the South “concreted over”.

Critics of the proposal include former Prime Minister Theresa May.

She said the new formula “does not guarantee a single extra home being built”.

As reported in the Sunday Telegraph, the government is now looking at redesigning the formula so it is “fairer”.

Revised plans are expected to be announced within weeks.

The new formula was proposed as part of wider government planning reforms.

They include a target to build 300,000 new homes across England each year by the mid-2020s, with the formula providing a rough estimate to local councils on how many need to be built in their communities.

Housing Secretary Robert Jenrick said local authorities would then be expected to come forward with potential sites for new buildings – taking into account constraints, such as areas protected by the green belt.

But several Tory MPs expressed concern that the government’s plan could mean more homes in rural areas and in the South East, rather than the North and Midlands.

While the 300,000 target remains “undiminished”, it is understood the government has listened to the feedback of critical MPs and ministers are now looking to “rebalance” the formula.

There is not much detail at this stage, but it is thought the focus will shift towards building more homes in the North and Midlands, and in urban areas or city centres – where the coronavirus pandemic has potentially accelerated a longer-term drop in demand for office and retail spaces.

It does not mean there will not still be new homes built in the South East.

Former Health Secretary Jeremy Hunt, who met Mr Jenrick this week to raise his concerns about the formula, thanked his colleague on Twitter for “listening to the concerns of me and many other MPs”.

He added: “We support your desire for more houses to help young people get on the housing ladder and will work with you to make sure a revised algorithm achieves that.”

The Tory MP for the Isle of Wight, Bob Seely, who led calls for a change to the plan – and secured a recent Commons debate on the issue – told the BBC he also welcomed the fact the government was willing to listen to the “strength of feeling and depth of concern” backbenchers had.

But he said they now had to work with MPs and “rethink” as the UK needs “levelling up, not concreting out.”

Mr Seely added: “This is not about MPs objecting to development. It is how development is done sensitively. It is also about how we combine commitments made in our manifesto.

“Concreting over large parts of rural and suburban England, with no democratic right of communities to appeal, as the algorithm and White Paper suggest, will undermine much of the good we are intending to do.”

Former Environment Secretary Theresa Villiers also said the change in approach from government was “encouraging”, but “a few tweaks are not enough”.

She said: “We need radical change to the proposal if we’re to ensure that this algorithm doesn’t lead to unacceptable overdevelopment.

“So there’s still a long way to go before the government’s planning reforms will be acceptable to backbench MPs committed to safeguarding the local environment in their constituencies.”

Meanwhile, sources from the Ministry of Housing, Communities and Local Government have also confirmed the department is looking to move a “proportion” of its operations to the West Midlands, with Wolverhampton understood to be the preferred location.

This would involve moving ministerial offices and senior officials, although ministers would still spend time in Westminster.

Next year has been described as a “ball park” timeline for the move.