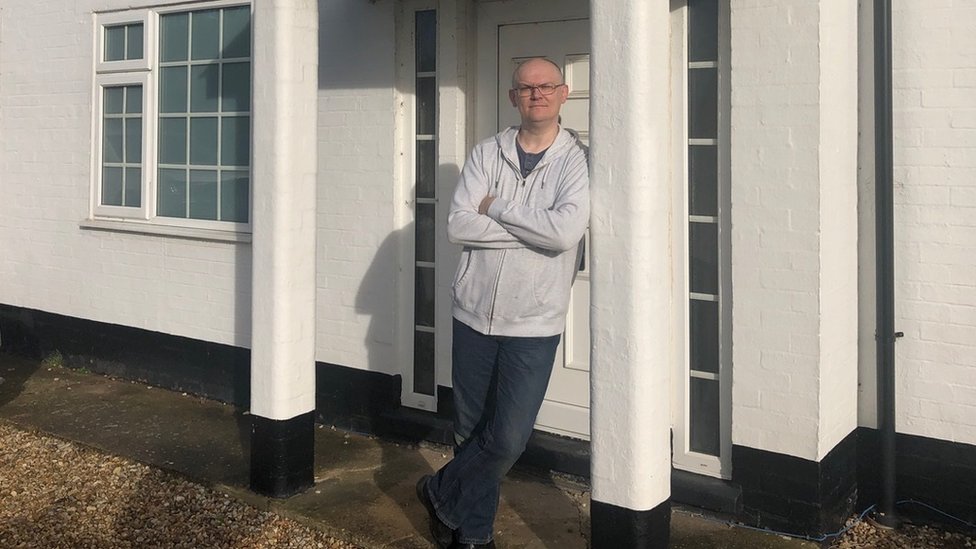 By Jane WakefieldTechnology reporter Publishedduration38 minutes agoimage copyrightPaul Brettimage captionPaul Brett lives “a stone’s throw” from the town of Wisbech but has very slow broadbandWisbech is a pretty market town in Cambridgeshire but it’s an area divided by access to fast broadband.Paul Brett moved to the area in 2003, seeking a slightly more laid-back way…

Wisbech is a pretty market town in Cambridgeshire but it’s an area divided by access to fast broadband.

Paul Brett moved to the area in 2003, seeking a slightly more laid-back way of life. But as a software engineer, he also needed fast broadband.

And despite being in a location that is not exactly rural – he can see the town from his house – he has struggled, initially on a 0.5Mbps (megabits per second) connection when he moved in, rising to 5Mbps now – still in the bottom few in the country for broadband speed.

A few years ago he was hopeful he could make the leap into the 21st century when a technology called Fibre to the Cabinet (FTTC) finally became available to the town.

He was disappointed to find it didn’t help.

“My speed halved – rather than being an upgrade it got worse, so I immediately cancelled that and got my money back,” he says.

That’s because FTTC, as the name suggests, runs only to the nearest green street cabinet. For the last part of the journey, broadband has to travel along old copper wire – which means that the further away you live, the worse the speed gets.

Not to be defeated, Mr Brett clubbed together with some of his neighbours to persuade BT to run 1Gbps (gigabit per second) fibre broadband to their street.

But when the quote came back from Openreach, the spin-off from BT that is responsible for the vast majority of the UK’s broadband infrastructure, he was shocked.

There was no breakdown of the cost but Openreach had helpfully done some of the maths – for 17 premises the cost per home or business would be £5,991.47, with the possibility of vouchers taking an estimated £20,000 off the overall estimate.

Mr Brett estimates that he is about 1.4 km (0.9 miles) away “as the crow flies” but a little longer if he takes into account the route BT would use to get fibre all the way to his home (known as fibre to the premises, or FTTP).

Matthew Bateman, Openreach’s director of infrastructure development, explained why it would be so expensive.

“We have to take a physical fibre cable along roads and fields and it needs to be put in underground ducts or across poles. The civil-engineering costs could involve road closures and the erection of several poles. These are all very large costs.”

But with so many people choosing to live in rural locations and more and more working from home in response to the Covid-19 crisis, Mr Brett thinks it is time for BT to “think outside the box”.

“BT needs to come up with innovative solutions which aren’t just about how far you are from their exchange, which they built back in the 1970s,” he said. “With the electricity power grid, you have main stations and then substations. Maybe something along those lines is needed to deliver a broadband network suitable for people who want to live good lives in rural locations.

“I’d like them to think on a decade-to-decade basis. Ultimately, we we need a network that everyone can use. This pandemic has brought that into focus.”

Openreach points out that the number of people in the UK still struggling on broadband speeds below 10Mbps is low – by its estimate, 600,000 premises across the UK.

How do I get better broadband?

Mike Hooper lives in the heart of the English countryside, about 3km from Grizebeck, in Cumbria. He applied under USO to find out how much it would cost to bring fibre broadband to his street – and was quoted £152,821 for installation.

He said the quote, which was for six properties, made him laugh.

“It’s ridiculous. There is no way we can afford that,” he said.

Unlike in the case of Mr Brett, his letter – from BT rather than Openreach – did at least break down the costs:

BT signed off the letter with an apologetic note: “We appreciate this is a lot of money.”

“From what I can tell they only have to drape some cables across a telegraph pole. I asked for a more detailed breakdown but they told me it would be anti-competitive,” Mr Hooper told the BBC.

Mr Hooper has tried other avenues. A rural community broadband group, B4RN, has provided fibre to lots of Cumbrian homes. But to make it cost-effective, it needed more than 1,000 occupiers to agree to installation.

Rallying even a few neighbours can be a frustrating process, said Mr Brett.

“BT relies on people getting communities together but it is difficult to get a consensus.”

“I tried to get the whole street involved, and people were interested up to the point that they actually have to pay for it,” he said.

The government is planning to inject £5bn towards an ambitious goal of delivering 1Gb broadband to everyone by 2025.

“We are waiting with bated breath and hope to see this scheme, which is subject to ministerial approval, in place by the end of the year,” said Mr Bateman.

“Our desire is to get broadband to everyone but the costs are very real, and without government intervention, quotes will remain high,” he said.

For Mr Brett, it feels that there is something of postcode lottery about where fibre goes and what it costs.

He claims that a friend of his, who lives in a remote Welsh valley, received fibre broadband from BT, with speeds of 150Mbps, with no up-front costs.

“They can get it to a Welsh village in the middle of nowhere but they can’t get it to Wisbech,” he said. “It’s not good enough, really.”