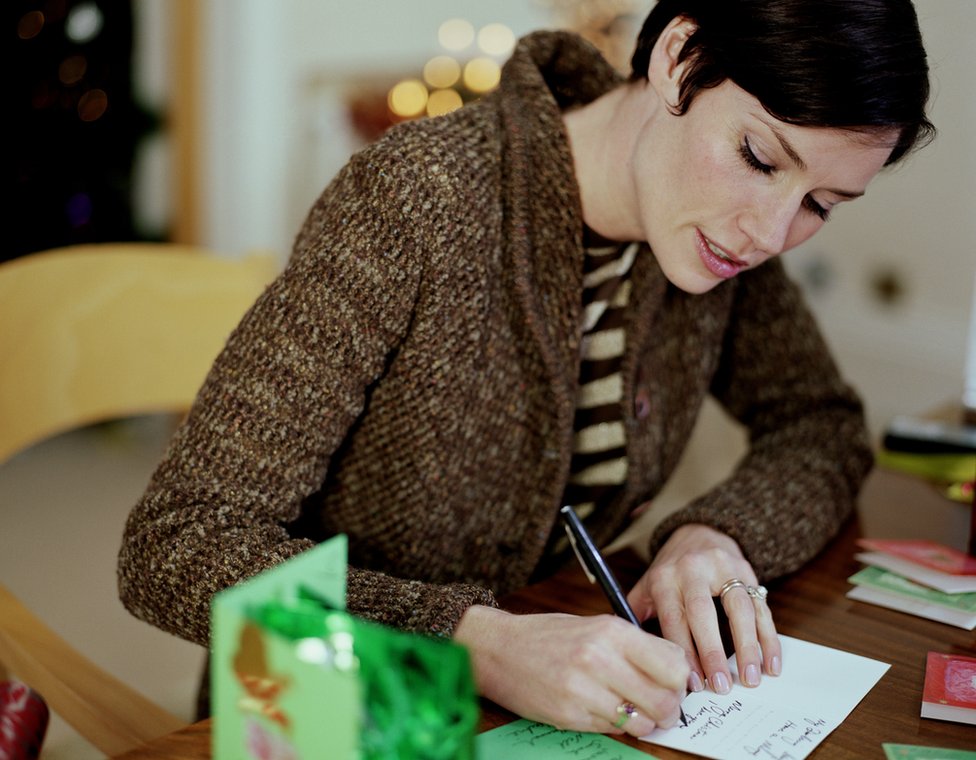 By Howard MustoeBusiness reporterPublishedduration10 hours agoimage copyrightGetty ImagesAs with many stores, specialist greetings card shops have been told to close during lockdown, cutting their usual seven-week Christmas sales period down to three.While cards, like everything else, can be bought online, more than 90% are still sold in shops in the UK.With non-essential shops in England…

As with many stores, specialist greetings card shops have been told to close during lockdown, cutting their usual seven-week Christmas sales period down to three.

While cards, like everything else, can be bought online, more than 90% are still sold in shops in the UK.

With non-essential shops in England due to reopen from 2 December, will there be a rush to buy cards? Or will we keep in touch in other ways?

Lindsey Nathan started the One More Card campaign in 2017 to encourage children to write to a lonely older neighbour or relative. She was inspired by a friend who asked strangers to send Christmas cards to isolated World War Two veteran Harry Winters.

As well as asking them to write an extra card, she toured schools to show children how to start a conversation with an older member of their community, and encouraged visits to care homes.

“This year it will be very different because we can’t do that,” she says.

“But actually it’s even more poignant,” she says. “We all know now what it feels like to be lonely and isolated because we’ve all been put in that situation this year.

“It’s hard and it’s a struggle. I think everybody, people who are working-age who have perhaps never known it before, and children understand it too.”

The UK card industry made sales of about £1.7bn last year, according to the Greeting Card Association lobby group, which estimates that the British send almost a billion Christmas cards a year, more per person than any other nation.

The attraction of sending and receiving cards is multifaceted, says Emma Bache, a handwriting expert and the author of handwriting guide Reading Between the Lines.

“The very act of putting pen to paper is very personal,” she says. “It shows that an individual has taken enough care and enough thought. The much slower process of hand writing a card is much more intimate and more thoughtful.

“It brings joy to the recipient. Most of what we see in the post these days are bills or other unwanted mail. It’s a little bit of character, a little bit of love, especially now.

“I’m hoping actually if people have more time on their hands, it will be a lovely thought that more will be sent.”

While specialist card shops are closed, cards can be purchased at supermarkets and other general stores, and online. But specialist card retailers account for about 60% of the market.

John Procter, founder of High Street chain Scribbler, says some sales have shifted online, but not enough to make up for a 50% drop in custom during the pandemic compared with a year ago.

He’s upbeat about his industry in general though, especially as people are barred from meeting and are rediscovering cards as ways to connect.

“What’s great is people are reverting to buying cards because it’s a physical manifestation, and the thing about it is handwriting. When you see something that’s handwritten, it’s as close as you are going to get to seeing someone.”

But he also thinks fewer Christmas cards might be bought this year.

Being forced to shut down in November means people will have three weeks from 2 December to buy their cards in store, which raises concerns for him about accommodating the number of expected customers in a socially distanced way. Most card shops are quite small, he says.

That’s one of the reasons he’d like the government to consider his shops as essential.

“It’s going to reduce the flow of people, reduce that pressure,” he says.

“We’ve seen a significant increase in customer demand since lockdown, with people using greeting cards as a way to stay in touch with their loved ones,” the company told the BBC. “We’ve sold a lot more Christmas cards at this stage in November than we had last year.”

But for anyone sending cards, there are other options than buying them ready-made. People with time on their hands may opt for the personal touch, says Lindsey Nathan, the campaigner. Children, especially, have found creative outlets while being stuck at home.

“All of the children, if you look how they’ve adapted, they’ve drawn rainbow pictures in the window, pictures for pumpkin trails at Halloween.

“Kids need things to do, we are in a second lockdown. Let’s make Christmas cards. Let’s think about who we have in the neighbourhood and hand deliver them.

“Write something about how they found lockdown or what their year has been like. I think the pandemic has been awful but the thing we can take from it is it’s brought people together.”