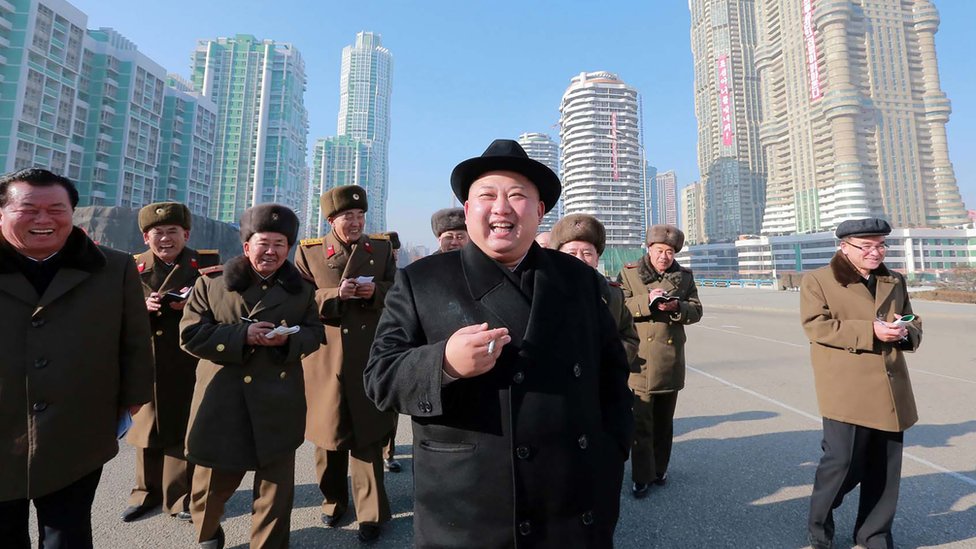 By Upasana BhatBBC MonitoringPublishedduration10 hours agoimage copyrightGetty Imagesimage captionNorth Korean leader Kim Jong-un is often seen smoking during his inspection visitsHow does a country like North Korea tackle one of the world’s highest smoking rates when its leader sends the wrong message by constantly lighting up in public?There have been a number of campaigns against…

How does a country like North Korea tackle one of the world’s highest smoking rates when its leader sends the wrong message by constantly lighting up in public?

There have been a number of campaigns against smoking in the country, where nearly half of all men but no women smoke, according to data from the World Health Organization.

A law passed earlier this month specified a ban on smoking in public places in North Korea and set out rules to provide a “more cultured and hygienic” environment for the people.

But state media often show Supreme Leader Kim Jong-un with a cigarette in hand, setting a bad example. So what exactly do the country’s anti-smoking measures achieve?

What does the new law say?

The Tobacco Prohibition Law adopted in early November sets out rules that all institutions, organisations and citizens “must follow in protecting the lives and health of the people”.

The law tightens the “legal and social controls on the production and sale of cigarettes and on smoking as required by the state tobacco-prohibition policy”.

It also mentions places where smoking is banned, such as areas meant for “political and ideological education”, theatres and cinemas, education units, public health facilities and public transport. There’s talk of penalties, but state media haven’t said what they are.

Days after passing the new law, state news agency KCNA reported that smokers could be at greater risk of contracting the coronavirus, citing “doctors and experts around the world”.

When did anti-smoking campaigns start?

North Korea’s anti-smoking drives became a regular occurrence after it became a signatory to the WHO Framework Convention on Tobacco Control, which it ratified in 2005.

As part of the country’s Tobacco Control Law, warning labels were put on cigarette packaging and restrictions put in place on smoking in public areas.

A “brisk” campaign took place in 2019 to inform smokers about the “harmfulness” of the practice, KCNA reported. State media also said steps had been taken to restrict the import of foreign-made tobacco.

Korean Central Television has described those who smoke in the morning and evening as “unconscionable” people, Seoul-based The Daily NK website reported.

This year, a website giving information about the dangers of smoking was launched. “Science and information are important in anti-smoking campaigns,” propaganda outlet Arirang-Meari said.

But Kim Jong-un is a heavy smoker, often spotted with a cigarette during his visits – whether it’s to a children’s camp or while supervising a missile test.

In February 2019, he was filmed smoking during a break en route a train journey to Vietnam for his second summit with US President Donald Trump. His sister Kim Yo-jong held an ashtray for him.

Kim’s wife Ri Sol-ju is said to have urged him to quit, but he “doesn’t listen”, some media outlets have reported.

Is it true that women don’t smoke?

Smoking rates have been high in North Korea for years, and remain so – although they do appear to be coming down very slowly.

According to the data, no women smoke. That’s probably because women are looked down on for smoking in North Korean society.

“It is both culturally and socially taboo for women to smoke in public, especially younger women, even in comparison to South Korea. In North Korea, some married or elderly women smoke in private,” James Banfill, director of CoreanaConnect, a US-based NGO working in North Korea, told BBC Monitoring.

“Smoking in North Korea has been and is defined by male consumers. Smoking has roles in North Korean male social, work and military culture. Excess tobacco consumption and addiction are culturally acceptable for men,” according to Min Chao Choy, a journalist with specialist website NK News.

In fact, women are used in state campaigns to discourage men from smoking.

Regardless of the cultural context and gender equations, smoking kills large numbers in the North.

In comparison, Australia – a country with a similar population at just over 25 million people – has 22,200 deaths annually due to tobacco use.

So what have these campaigns achieved?

Some health experts feel the initiatives are making an impact.

“Less than half of adult males or 46.1% are smokers: this is down from 52.3% in 2009. Over the last more than 20 visits over 13 years to North Korea, I am seeing fewer smokers in Pyongyang, especially in the younger males,” Kee B Park, director of the Korea Health Policy Project at Harvard Medical School, told BBC Monitoring.

But there seems to be mixed messaging as cigarettes are easily available and affordable in North Korea.

“Like many nations, North Korea strives towards its own concept of modernity, which includes some modern health policies like smoking cessation. The difference between the regime’s aspirations and what occurs in reality is often vast, and that divide can be seen in the country’s smoking policies versus its thriving smoking culture,” Min Chao Choy says.

And some analysts feel that stronger deterrents are needed to get people to kick the habit.

“Anti-smoking campaigns are probably aimed at reducing smoking in specific places. Other than sheer willpower, there aren’t many mechanisms to help a person quit in North Korea,” Mr Banfill says.

But imagine what a powerful message it would be if the leader set a better example and decided to quit? Of course there’s no knowing when or if that might ever happen.