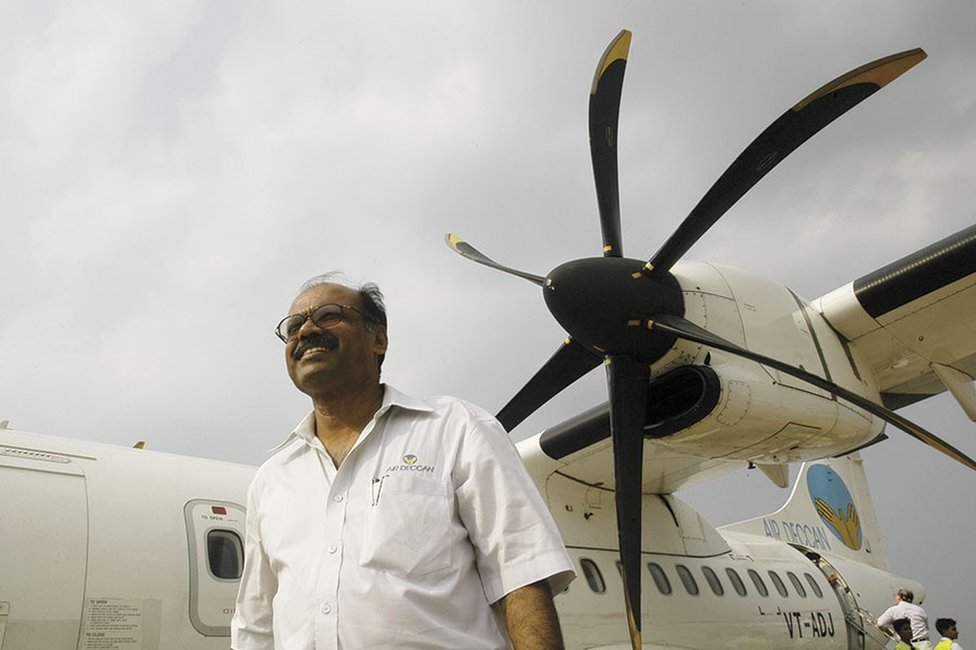 By Sudha G Tilak DelhiPublishedduration2 days agoimage copyrightGetty Imagesimage captionCapt Gopinath launched India’s first budget airline in 2003In the summer of 2005, retired army officer-turned-businessman GR Gopinath announced that he would enable Indians to fly at one rupee or less than a cent.It was an incredulous sales pitch from the founder of the country’s first…

In the summer of 2005, retired army officer-turned-businessman GR Gopinath announced that he would enable Indians to fly at one rupee or less than a cent.

It was an incredulous sales pitch from the founder of the country’s first budget airline.

Air Deccan, his then two-year-old no-frills airline modelled on European budget carriers like EasyJet and Ryanair, had already made flying affordable to millions of Indians. Capt Gopinath’s tickets cost half of what competitors charged.

Now his airline introduced “dynamic pricing” where a small number of “early bird” customers could travel at a rupee. Latecomers would pay a higher ticket price, which would still be substantially lower than competitors. Not surprisingly, booking counters were overrun with customers, many of them first-time fliers. Critics howled such pricing methods would wreck the industry.

“The one rupee ticket fired the imagination of the people and quickly became a buzzword,” wrote Capt Gopinath in his memoir. He believed his airline had not “only broken the price barrier, but India’s caste and class barrier to flying”.

A new Tamil film Soorarai Pottru (Praise the Brave), released on Amazon Prime Video this week, celebrates the life of the maverick businessman. Based on Capt Gopinath’s memoir, the film is produced by Academy Award winner Guneet Monga.

“It’s an incredible story about bridging the gap between the have and have-nots. Most Indians were excited when the concept of low-cost flying was introduced by Capt Gopinath,” Ms Monga told the BBC. Tamil film star Suriya, who plays the businessman, says, “He revolutionised flying in India by breaking class and economic barriers”.

Soorarai Pottru has all the popular tropes of commercial Tamil cinema: song and dance, a focus on breaking caste and class taboos, and much action and melodrama.

But the film also tells the story of how Capt Gopinath found 500 idle airports and airstrips in India to help expand regional connectivity. It shows how his wife, Bhargavi, chipped in with her money from her small baking business to help him when he was scrambling for funds; and how his friends from the army were his greatest supporters in fulfilling his dream.

“The film is about what Capt Gopinath stood for – equal access and inclusiveness. He often bit more than he could chew, failed in his ventures, went bust, but his never-say-die spirit is infectious”, says Suriya.

Reviews have been encouraging. One said the film makes for a “riveting watch” and another said “beneath the inspiring rags-to-riches tale” it film was a solid commentary on caste.” Yet another critic found it an “uplifting underdog tale, where victory was hard-fought, and won”.

Capt Gopinath was born to a teacher-farmer father and stay-at-home mother in a remote village in the southern state of Karnataka.

He joined the army and served in the 1971 Bangladesh Liberation War. He retired at 28. Spurred by a “restless spirit” and the help of his friends, he tried his hand in many businesses, including sericulture and hospitality.

“I was a restless soul in my youth and a mad man obsessed with the idea to make wealth accessible to all”, Capt Gopinath told the BBC.

His friends told him that it was not enough to dream but to ”sell dreams”.

In 1997 he founded a helicopter service as India’s first private charter company. The tagline , he recalls, was: “If you show us a spot on the map, we will get you there.”

The spark to start a low-cost airline in India came during a holiday in the US in 2000.

At Phoenix, he found the local airport handled 1,000 flights and 100,000 passengers a day. It was difficult to believe that a “back of beyond airport” handled more flights and passengers than all the 40 airports in India put together, he recounted.

The US, he discovered, operated 40,000 commercial flights a day, compared to 420 in India. He did a quick back-of-the envelope calculation: if 5% of the roughly 30 million Indians who travelled by train and bus began flying, that would translate into an eye-popping 530 million air travellers a year. “Even if this number looked huge, it did not mean 530 million different people travelling but 200 million middle-class people travelling two and half times a year, which was not an unimaginable prospect over the next 30 years,” he explains.

“I came back to India possessed by the idea that the common man must fly in India too,” Capt Gopinath says.

In August 2003 he founded Air Deccan with a fleet of six 48-seater twin-engine fixed-wing turboprop aircraft, and one flight a day between the southern cities of Hubli and Bangalore.

By 2007, the airline was operating 380 flights a day from 67 airports, many in small towns. The fleet had grown to 45 planes. Twenty five thousand passengers were flying budget every day, up from 2,000 when the airline began. Three million Indians flew at one rupee a ticket.

By then other low-cost carriers had entered the market and still dominate it. In 2018, some 140 million Indians flew domestically, mostly on budget carriers.

But Air Deccan is no longer in the skies. In September 2011, Mr Mallya shut down a bleeding Kingfisher Red and eventually his whole business, which went bankrupt.

Mr Mallya “never had the time for the airline,” Capt Gopinath told the BBC in 2012. “If he had focused on it – I don’t think anyone could have done a better job than him.”

“It was sad. But the dream of Air Deccan lives on. The [budget airline] revolution continues,” Capt Gopinath says.