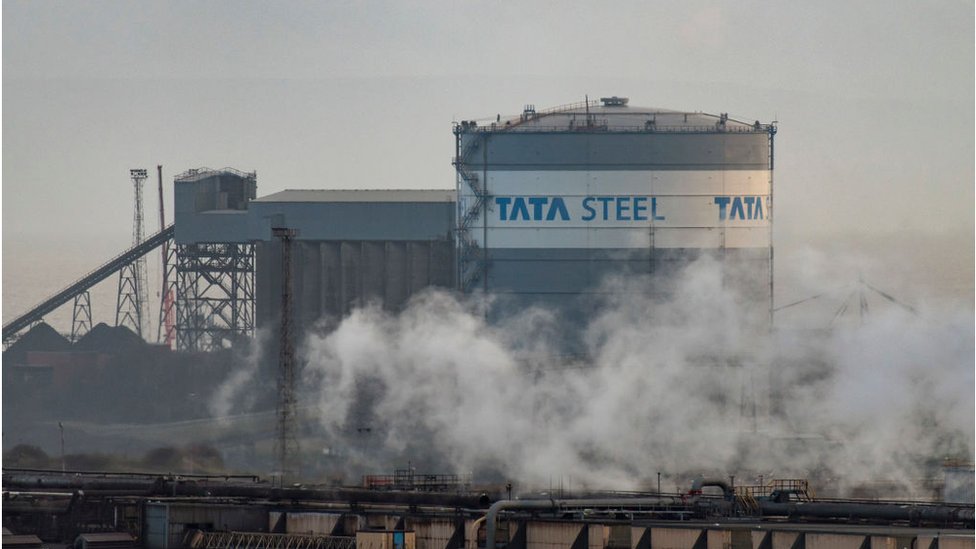 Publishedduration9 minutes agoimage copyrightGetty Imagesimage captionAbout 4,000 people are empolyed at the Tata Steel plant in Port TalbotTata Steel has announced plans to make its UK business, based mainly in Port Talbot, “self-sustaining” while selling its Netherlands-based operations.Tata Steel said it planned to sell the European arm of its business and keep the UK business…

Tata Steel has announced plans to make its UK business, based mainly in Port Talbot, “self-sustaining” while selling its Netherlands-based operations.

Tata Steel said it planned to sell the European arm of its business and keep the UK business running without financial support from India.

Tata said it was speaking to the UK government about the business’s future.

The UK government said: “This is a commercial decision for Tata Steel. We will continue to work with Tata Steel and other stakeholders as the company shapes its business strategy for the future.

“The UK government remains committed to supporting a sustainable, long-term future for steel making in the UK.”

The India-based business announced Swedish steel firm SSAB had initiated talks about the acquisition of its business in the Netherlands, including its steelworks at Ijmuiden, north-west of Amsterdam.

Tata said it plans to separate the UK and Netherlands arms of the business and “will pursue separate strategic paths for the Netherlands and UK business in the future”.

It added: “Tata Steel continues its dialogue with the UK government on potential measures to safeguard the long-term future of Tata Steel UK and is also reviewing all options to make the business self-sustaining without the need for any funding support from Tata Steel India in the future.”

About half of Tata’s 8,000 UK workers are based at Port Talbot, with several other sites around Wales and the rest of the UK.

T V Narendran, CEO and managing director of Tata, said: “We are continuing our discussions with the UK government regarding the future strategy of our UK business.”

What does it mean for Port Talbot’s steelworks?

Mr Skates said: “Today’s announcement will be extremely worrying for Tata Steel workers across Wales, their families, local communities and the supply chain, but we know the steel industry has a future in Wales and the UK.

“The first minister and I spoke with Tata today and they said they are determined to find a sustainable future for operations in the UK and to safeguard the 8,000 workforce, most of which are in Wales.

“The industry is now waiting for the UK government to take immediate action to safeguard the sector and protect jobs. Every day they are not at the table is another day lost for workers and for an industry of strategic importance.”

Concerns have been issued over Tata’s future several times in recent years, with Aberavon MP Stephen Kinnock saying in July that a plan to shut off two blast furnaces and replace them with electrical arch furnaces raised “massive questions” about the future of the industry.

David Rees, the Labour MS for Aberavon, said in a tweet: “Once again our steelworkers are facing challenging times following this news. Almost five years ago they and their families went through hell as their livelihoods came under threat with the then announcement of a proposed sale of the Tata steel plants in Wales

“Today, those concerns have been resurrected with the announcement that Tata Steel Europe is likely to be split with the Dutch components being sold to Swedish steelmaker SSAB leaving the UK element to stand alone.”

‘Uncertainty in the future’

She said: “The company has made no secret of the fact it’s wanted to offload the European side of the business.

“Previous negotiations have fallen through and we’ve had the pandemic which has depressed the market.

“It’s made things difficult for automotive industry – which is a major steel customer – and there’s still uncertainty in the future.”

What are the trade unions saying?

Tony Brady, from the Unite union, said it was “essential” that Tata is able to keep trading with the EU after the end of the Brexit transition period on 31 December.

He said: “Today’s news effectively means that Tata’s European steel business will now be based solely in the UK.

“With Brexit fast approaching it is essential that Tata’s UK steel business is able to continue trading effectively across the European Union.

“This means that it is crucial that the UK comes to a trade agreement with the EU in the coming weeks. The UK government have told us that Brexit will be good for Britain and British jobs, they must deliver on that promise.”

Meanwhile, Roy Rickhuss, the general secretary of the Community Union, said Tata must now “reaffirm their commitment to the UK”.

He said: “We will challenge Tata at every turn and rest assured we will protect our members’ interests. Should we conclude the separation of Tata Steel UK would place our members’ livelihoods at risk then we will vigorously oppose the break-up of the company.

“There is no doubt a sustainable future for Tata Steel UK depends on Tata and the government concluding a deal that will support the transition to low-carbon steelmaking.

He added: “There are many challenges ahead but we know Tata Steel UK can have a bright future.

“We take confidence from the fact our steelworkers are the best in the world. Under the right leadership, given the right tools, and the chance to compete on a level playing field, we back ourselves to compete with the world’s best.”

The GMB union said it was “clear” that “manufacturers are expecting the UK to plot a different path from our European neighbours”.