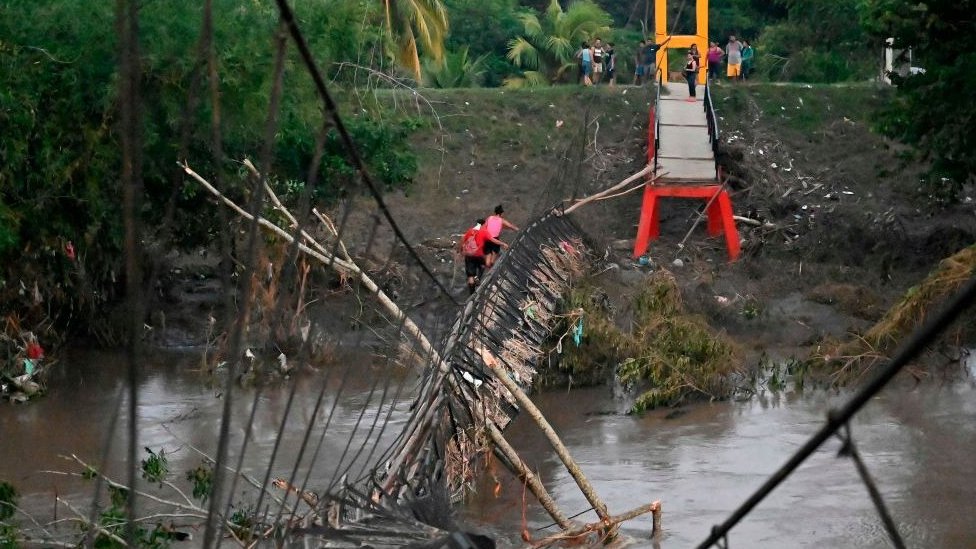 Publishedduration40 minutes agoimage copyrightGetty Imagesimage captionAccess to some hard-hit areas in Honduras remains difficultEvacuations of coastal areas of Honduras are under way as a second hurricane in as many weeks is forecast to hit Central America.Forecasters say Tropical Storm Iota is expected to strengthen to a “major hurricane” when it hits Honduras and Nicaragua on…

Evacuations of coastal areas of Honduras are under way as a second hurricane in as many weeks is forecast to hit Central America.

Forecasters say Tropical Storm Iota is expected to strengthen to a “major hurricane” when it hits Honduras and Nicaragua on Sunday.

The region is still reeling from the effects of Hurricane Eta which killed at least 200 people earlier this month.

The worst-hit area was Guatemala’s central Alta Verapaz region, where mudslides buried dozens of homes in the village of Quejá, with some 100 people feared dead. At least 50 deaths were reported elsewhere in the country.

The US National Hurricane Center (NHC) warned that “flooding and mudslides in Nicaragua and Honduras could be exacerbated by Hurricane Eta’s recent effects there”.

Parts of Guatemala, Costa Rica, Panama, Belize, El Salvador and Colombia have been warned to prepare for “life-threatening flash-flooding and river flooding” while coastal areas of Hispaniola and Jamaica may also see “life-threatening surf and rip current conditions”.

The Honduran authorities ordered the evacuation of people in the area of San Pedro Sula, the country’s second city and industrial capital, on Friday.

Meanwhile, Guatemala’s disaster officials have urged residents in parts of the north to voluntarily evacuate to shelters.

“Our ground is already saturated, so it’s to be expected that we have more farming and infrastructure damage,” President Alejandro Giammattei said.

Iota will be the 30th storm this year to wreak havoc across the Central American, Caribbean and south-eastern US – a record for the region’s hurricane season.

President Giammattei blamed the increasing frequency and intensity of hurricanes on climate change and accused industrialised nations of being responsible.

“Central America is one of the regions where climate change is felt the most,” he told reporters after meeting his Honduran counterpart, Juan Orlando Hernández, in Guatemala City.

The region is hit by “catastrophic floods, extreme droughts and the greatest poverty” but nonetheless receives “the least help on behalf of these industrialised nations,” he was quoted by AFP as saying.