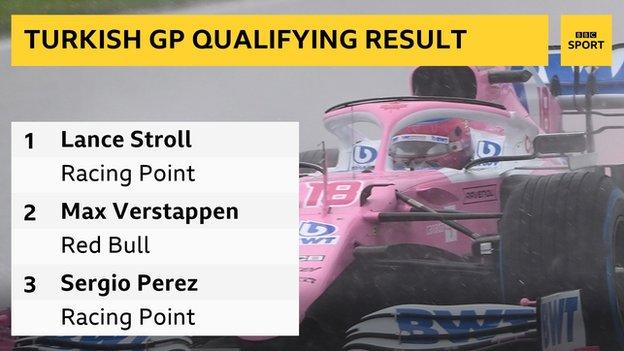 Sunday’s Turkish Grand Prix is live on 5 Live and the BBC Sport website at 10:10 GMTRacing Point’s Lance Stroll took a sensational maiden pole position in a chaotic wet qualifying session at the Turkish Grand Prix. The Canadian beat Red Bull’s Max Verstappen by 0.290 seconds as Lewis Hamilton, on the verge of his…

The Canadian beat Red Bull’s Max Verstappen by 0.290 seconds as Lewis Hamilton, on the verge of his seventh title, could manage only sixth place.

But Stroll is one of the drivers under investigation for not slowing for caution flags so may yet lose his pole.

Hamilton will be disappointed with his grid position but looks in extremely good shape to win the title.

He will clinch it, and equal Michael Schumacher’s all-time record, as long as Bottas does not outscore him by more than seven points, and as the Finn is starting three places behind the world champion, he would not be expected to beat Hamilton.

How did Stroll do that?

Stroll’s pole came completely out of the blue on a day when his Racing Point team clearly had their car set up just so to work the tyres effectively on a treacherously slippery track in challenging conditions.

The circuit is holding a grand prix for the first time since 2011 and was newly resurfaced just two weeks ago, leaving an oily sheen on its surface that has made it precarious even in the dry.

Perez was quickest for most of the final qualifying session but suffered traffic on his final lap when the track was in its best conditions, leaving the door open for Stroll, who grasped the opportunity brilliantly.

Stroll, 22, has had an up-and-down career since joining F1 with Williams in 2017, but has often excelled in wet conditions and did so again at Istanbul Park.

“I can’t really put it into words right now,” Stroll said. “I’m shocked. I didn’t expect us to be up here. In final practice there were a lot things we were weren’t sure of coming into qualifying – we didn’t look too competitive.

“But I am so happy with that. I really put that lap together. Valtteri spun in front of me on one lap and then I had one lap at the end to do it and nailed pretty much every corner.

“It’s such a great way to bounce back after a tough few weeks. Since Mugello it has been a tough ride but it feels really good right now.”

Stroll crashed out at high speed in the closing laps of the Tuscan Grand Prix after a puncture, was taken out of the subsequent Russian Grand Prix in a first-lap crash with Ferrari’s Charles Leclerc and then missed the Eifel Grand Prix when he caught coronavirus.

He returned for the Portuguese Grand Prix, but has had two difficult events there and at Imola, and said that meant this “special moment” was all the better for him.

Verstappen had been in stunning form earlier in the qualifying session when the track was wetter and full wet tyres were required rather than the intermediates with shallower tread that better fitted the track in the final session.

The Dutchman was two seconds quicker than anyone else in the second part of qualifying and looked a certain bet for pole.

But he found the car did not perform as well on the intermediate tyres and Verstappen was downcast afterwards, feeling a shot at pole had slipped through his fingers.

“Already in Q1 when we tried to go out on the inters we had no grip,” Verstappen said. “They were horrible for us. The extreme tyres were good, we were very comfortable.”

The Mercedes performance was a surprise because Hamilton is usually so strong in the wet and the car has been so dominant this season.

But Hamilton did hardly any running in the wet final practice session and never showed competitive pace in qualifying, although he ended up 0.7secs faster and three places ahead of Bottas.

“We did the best we could and that was as fast as we could go,” Hamilton said. “The track feels terrible, it’s just like driving on ice but for whatever reason some people can get the tyres switched on better than us.

“I did the best I could. I’m generally happy. I didn’t spin and didn’t make any mistakes and I did everything I could with what I had.”

Bottas added: “Couldn’t keep the temperature or create a temperature in the tyres and it’s been the story for us all weekend.

“The tyre is the only thing connecting the car to the ground and if you can’t create the grip from the tyres, it doesn’t matter what car you have. The teams that got the tyres to work were at the top and we didn’t do a good enough job today.”

But Mercedes’ disappointment was as nothing compared to that of Leclerc and Ferrari.

Leclerc was second fastest behind Verstappen in final practice and was fancied to be a contender for pole but the red cars had no pace in qualifying and he ended up 14th, two places behind team-mate Sebastian Vettel.

When told the gap to Verstappen at the end of second qualifying, Leclerc said incredulously: “We are six seconds off?”

“This morning also it was raining and we were in the pace of Red Bull,” Leclerc added afterwards. “This afternoon we were six seconds off. I have absolutely no explanation. It has been a disaster.”

There may yet be changes to the grid order because stewards are investigating the end of the first session, when several drivers improved when there were yellow caution flags at a couple of corners.

The first session lasted an hour and included two red flag periods, the first for 40 minutes when the conditions deteriorated as rain came down harder, and the second shortly after the restart when Romain Grosjean pitched his Haas into the gravel at the first corner.