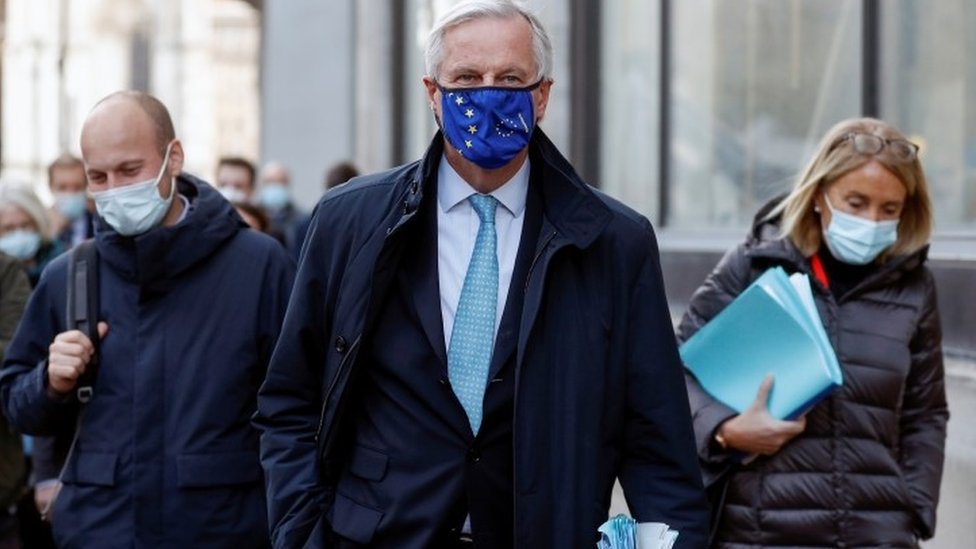 Publishedduration4 hours agoTrade talks between the UK and EU are reaching the “make or break” point, the two sides have said, with key points of difference proving hard to resolve.EU sources said there had been less progress in recent days on outstanding sticking points than they had hoped for and the “moment of truth” was…

Trade talks between the UK and EU are reaching the “make or break” point, the two sides have said, with key points of difference proving hard to resolve.

EU sources said there had been less progress in recent days on outstanding sticking points than they had hoped for and the “moment of truth” was nearing.

UK sources said there were still “quite big gaps” between the sides.

Both sides doubted that a draft deal could now be reached in the coming days, as the EU had originally hoped.

The two sides are in a race against the clock to settle their future economic partnership in time for it to take effect on 1 January, when the UK will leave the EU’s single market and customs union.

UK sources indicated there had been no breakthrough this week between the UK’s negotiator David Frost and his EU counterpart Michel Barnier, with the two ending their discussions in a similar position to how they started them.

An EU source familiar with the process said one of their meetings had been “short and brutal”.

The two men are due to meet again in Brussels on Monday ahead of what is shaping up to be a critical week.

BBC political editor Laura Kuenssberg said the EU would like to reach a draft agreement in the next few days, in time for the leaders’ of its 27 member countries to discuss it at a virtual conference on Thursday.

But she said it was possible that this working deadline would be missed, with a deal now perhaps not being concluded until early December.

Unresolved issues include the EU’s insistence on a “level-playing field” in rules and regulations between British firms and those on the continent and guarantees to prevent the lowering of standards known as “non-regression”.

Other areas of disagreement surround fishing quotas and legal mechanisms for enforcing any agreement.

The UK left the EU on 31 January but is continuing to follow many of the bloc’s rules until 31 December, when the 11-month post-Brexit transition period ends.

UK ministers had expressed increasing optimism in recent weeks about the state of negotiations with Michael Gove suggesting the “penny is dropping” in Brussels over the UK’s post-Brexit status as an independent nation.

If a trade deal is not agreed, the UK will trade with the bloc on World Trade Organisation rules – leading to tariffs being introduced on many imports and exports, which could push up costs for businesses and consumers.

Both sides say they want to avoid this outcome, but the the EU has said it will not do a deal “at any price”, and Mr Johnson has said the UK will prosper either way.

If a deal is agreed, it would need to be signed off by MPs in the UK and parliaments across the EU before the end of the transition period to come into force by 1 January.