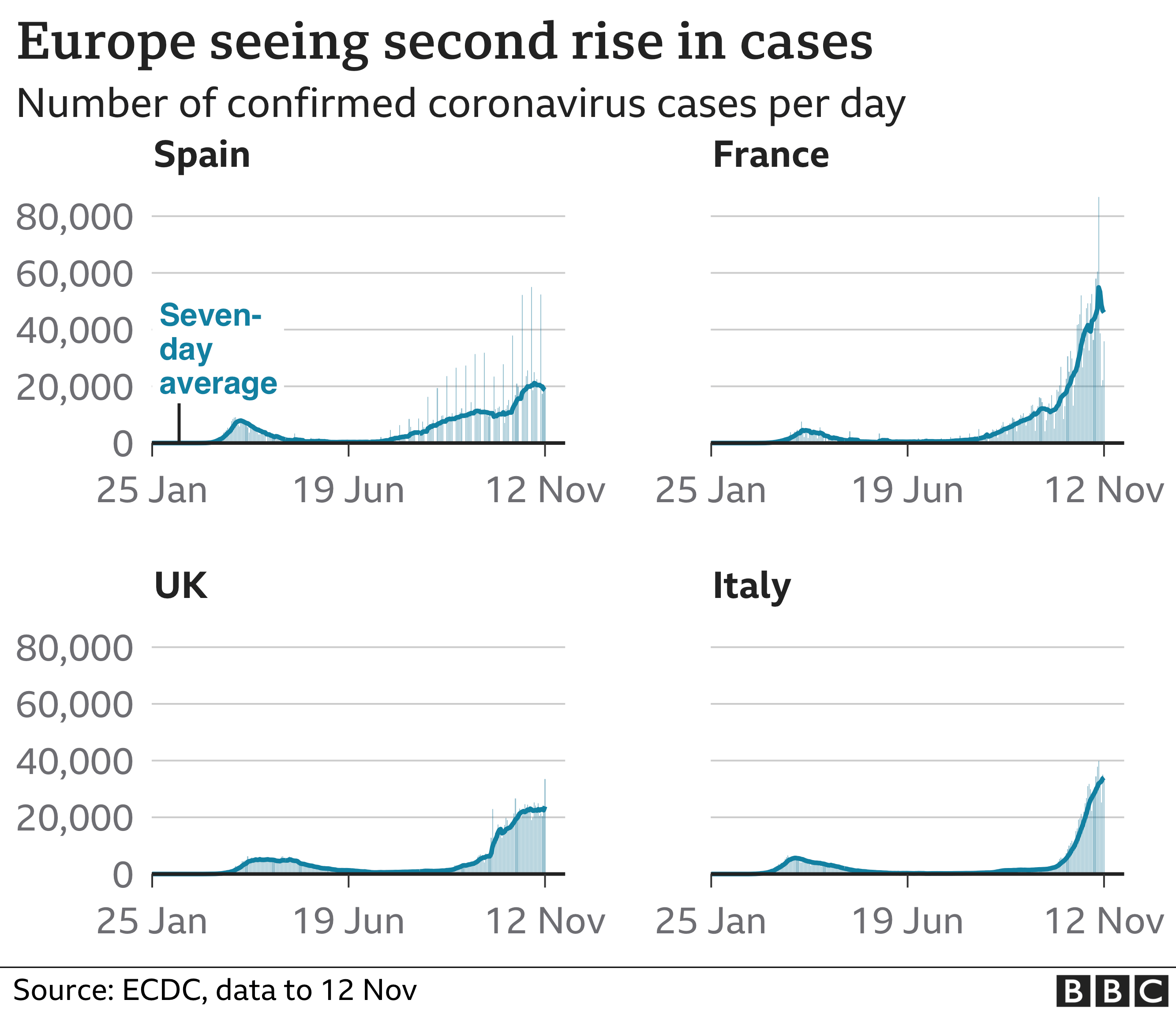 Publishedduration4 hours agoimage copyrightEPAimage captionStaff at this hospital in Naples treated waiting patients in their cars because the wards were overwhelmedItaly has added more regions to its coronavirus high-risk “red zones” as cases across the country hit a new daily record.Campania and Tuscany will join other regions placed under the strictest lockdown measures from Sunday.Authorities…

Italy has added more regions to its coronavirus high-risk “red zones” as cases across the country hit a new daily record.

Campania and Tuscany will join other regions placed under the strictest lockdown measures from Sunday.

Authorities in Campania, which includes Naples, have warned that the health system there is close to collapse.

It passed the one million mark earlier this week and there have been more than 44,000 deaths.

The government’s coronavirus consultant, Walter Ricciardi, told reporters that the country has “two to three weeks to decide whether to impose a new national lockdown”.

Earlier this year Italy became the epicentre of the pandemic in Europe but brought its outbreak under control with a tough national lockdown. Restrictions were gradually lifted as cases eased but last week – faced with a second wave of infections, it introduced new measures.

Regions are divided into three zones – red for the highest risk, then orange and yellow. In the red zone at the moment are Lombardy, Bolzano, Piedmont and Aosta Valley in the north, and Calabria in the south.

In these areas, which cover about 16.5 million people in a population of 60 million, residents can only leave home for work, health reasons, essential shopping or emergencies. All non-essential shops are closed.

Bars and restaurants are also shut but people can exercise near their homes if they wear masks. Hairdressers can remain open.

A quarter of the new cases are in Lombardy, which includes Milan. It was the worst-hit area in Italy’s first outbreak and it was Europe’s first coronavirus hotspot.

Campania, however, has shot straight from the yellow zone to red as a spike in cases threatened to overwhelm hospitals.

“The situation in Campania is out of control,” Foreign Minister Luigi Di Maio told La Stampa newspaper on Friday. “We need urgent restrictions… people are dying.”

Italian media has broadcast shocking scenes from hospitals in Naples.

Staff at one hospital have brought oxygen tanks and other equipment outside to treat people parked in their cars because the emergency department was swamped with cases.

Also this week a video went viral of an elderly suspected Covid patient found dead in the toilet of the Cardarelli hospital emergency department in Naples. His granddaughter called it “an outrage to human dignity” and accused staff of neglect.

Lockdowns and other measures are in force in several European countries experiencing a second wave of the virus. In other developments: