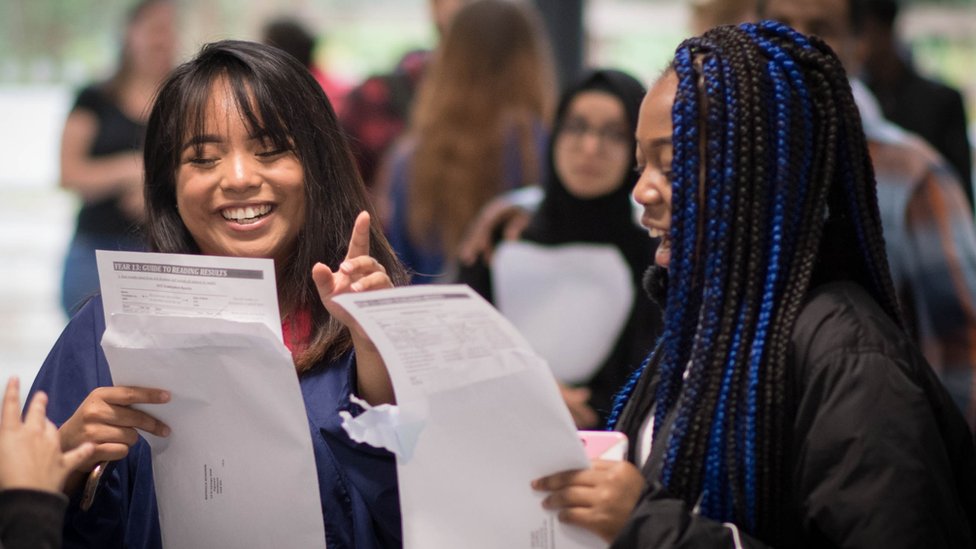 By Hannah RichardsonEducation and social affairs reporterPublishedduration5 hours agoStudents could be routinely issued university offers based on actual exam results rather than predicted grades in future, under a proposed shake-up.A post-qualifications admissions (PQA) system could be introduced across the UK by 2023-24, says Universities UK.The plan is one of a series of recommendations from an…

Students could be routinely issued university offers based on actual exam results rather than predicted grades in future, under a proposed shake-up.

A post-qualifications admissions (PQA) system could be introduced across the UK by 2023-24, says Universities UK.

The plan is one of a series of recommendations from an 18-month review by university leaders across Britain.

It comes after a chaotic summer exam results process meant many students lost places on their chosen courses.

Some reports over the years have suggested a switch to exam results, arguing it would be fairer to candidates from less-affluent backgrounds.

But universities previously cited the timescale between results day and courses starting as a reason not to proceed.

The review also calls for the scrapping of “conditional unconditional offers”, under which students are offered guaranteed places regardless of results if they make an institution their firm choice.

It says the use of regular unconditional offers should be restricted to specific circumstances, including where such decisions have been informed by an interview, audition, submission of work or a skills test.

A new code of practice should be developed to make clear that the use of incentives in offer-making, such as financial inducements, should not add any pressure to candidates, the report adds.

Failure to follow the code would result in sanctions against universities, UUK said.

The recommendations come after the universities admissions service Ucas proposed that students could apply to university after receiving their A-levels, and then start courses in January.

But the UUK report raises concerns about the disruption that would cause to school timetables and university competitiveness overseas.

The review acknowledges that switching to PQA might still be challenging for courses that are highly selective, as it could be difficult to arrange interviews, and there may be an increase in admissions tests.

It could also mean there were fewer teachers available over the summer to help students make decisions, and less time for applicants to respond to offers.

The organisation says it will consult universities, schools and government to develop and further test the workability of the new approach.

Professor Quintin McKellar, vice-chancellor of the University of Hertfordshire and chairman of the Fair Admissions Review, said: “There isn’t a perfect one-size-fits-all solution for the variety of courses and institutions, but the review has decided it would be fairer for students to receive university places based on exam results, not predictions.”

He added that any change should be taken forward carefully by universities, with further consultation with students, government, and those working across the education sector.

“We need to be confident that any new process will allow for effective careers advice and support for applicants,” he said.

Jo Grady, general secretary of the University and College Union (UCU), said: “The current system is based on inaccurately predicted results and leads to those from less-affluent backgrounds losing out.

“Allowing students to apply after they receive their results will help level the playing field and put a stop to the chaotic clearing scramble.”

She added: “UCU and many sector leaders now agree the time has come for the UK to join the rest of the world and finally to move away from the current unfair system.”

Geoff Barton, general secretary of the Association of School and College Leaders (ASCL), said: “Teachers work hard and diligently to provide accurate predicted grades, but it is not an exact science and never can be.

“Post-qualification admissions would be better and fairer.”