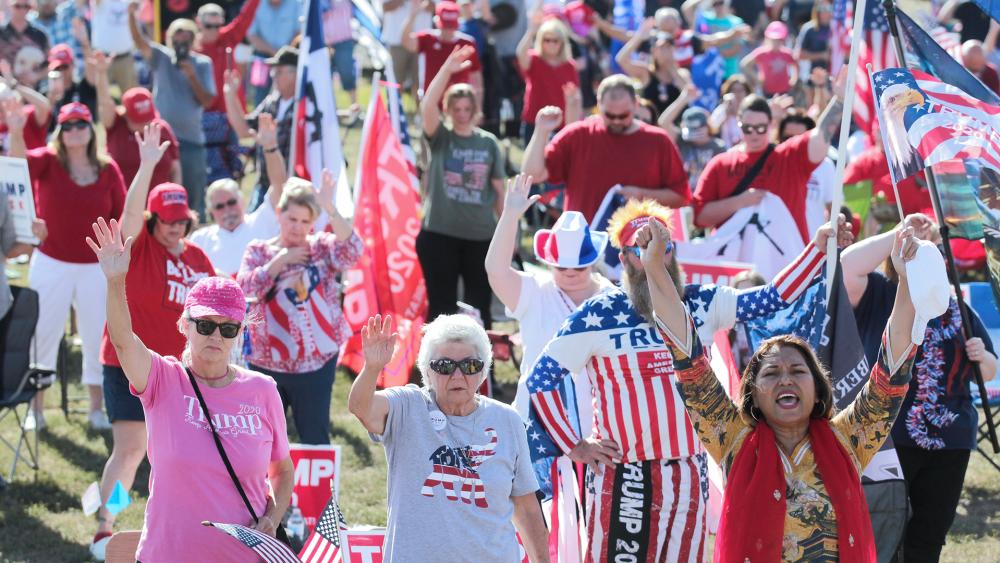 Supporters of President Donald Trump pray during a rally in Conroe, Texas, Nov. 7, 2020. (Jason Fochtman/Houston Chronicle via AP) Many Christians are divided during this post-election time. Whether they believe it’s not over or that it’s time to move on, most can agree it’s a critical moment for the church, no matter the outcome.…

Many Christians are divided during this post-election time. Whether they believe it’s not over or that it’s time to move on, most can agree it’s a critical moment for the church, no matter the outcome.

Prophet and President of Destiny Encounters International Charlie Shamp says “this is the greatest hour for the church.” Shamp told The Elijah List’s Steve Shultz recently, “The justice scale is resting in the heart of the nation and it’s either going to go one way or the other way, and the only deciding factor that is going to change this moment in history is the church,” he said.

“The church has to rise, take hold of the prophetic word, decree it and do not let go of it and we will tip the scales of justice and we will see a transformation like we have never seen in this nation before,” Shamp said.

WHY DO WE NEED TO PRAY?

Some Christians question why do we need to pray if the votes have already been cast – hasn’t God already spoken?

Dutch Sheets, author of Intercessory Prayer and many other books that explain the true importance of prayer, says it’s theologically inaccurate to believe that everything that happens on earth is God’s will. He points to the many historical events that violate God’s holy nature and character, arguing that prayer is the battle to see God’s will truly be done on earth as it is in heaven.

“Don’t buy into that theology that says well God’s just in control and He’s predestined everything, He’s going to get it done anyway. No, God needs our prayers, He’s using our prayers, and therefore they matter and that means, be a part of prayer meetings, get on prayer calls,” Sheets said during a recent “Conversations with Dutch” podcast.

Sheets adds this is not the time to get discouraged, citing what happened in the spiritual battle mentioned in the book of Daniel.

“Don’t be surprised that the enemy is fighting this, Daniel, even though God had heard his prayer for the restoration of Israel, and released angels immediately to start working to bring forth the answer to Daniel; Daniel had to fast and pray for 3 more weeks, 21 days against a principality over Persia before the battle could be won in the invisible realm,” Sheets recounted.

PRAY FOR THOSE IN AUTHORITY

Rev. Robert Jeffress, a faith advisor to President Trump, calls this is a “rubber meets the road” moment for Christians.

“Over the last 4 years, we’ve told people that you need to respect the governing authorities, we quote Paul in Romans 13 who says, there’s no government authority that exists that hasn’t been established by God. And remember, when Paul wrote that, remember, Nero, the evil Emperor of Rome, was on the throne and he was the one that ultimately beheaded the Apostle Paul and yet Paul would say, Nero was there by God’s permission,” Jeffress said.

THE CHURCH WILL HAVE THE FINAL SAY

Still others, like Prophet Jeff Jansen, Founder of Global Fire Ministries told Sid Roth, host of the TV show “It’s Supernatural” that the church will have the final say in this election.

“We need to lift our voices, to have our voices counted in the courts of heaven to be able to release the verdict that God wants – God is looking for someone to agree with Him on the planet and that’s the church,” Jansen said.

There’s the saying, “As the church goes, so goes the nation.”  And many believe that statement has never been more true.

AS BIBLICAL VIEWS ARE SILENCED MORE AND MORE ON SOCIAL MEDIA, BE SURE TO STAY UP TO DATE WITH THE FREE CBN NEWS APP
Click Here Get the App with Special Alerts on Breaking News and Top Stories