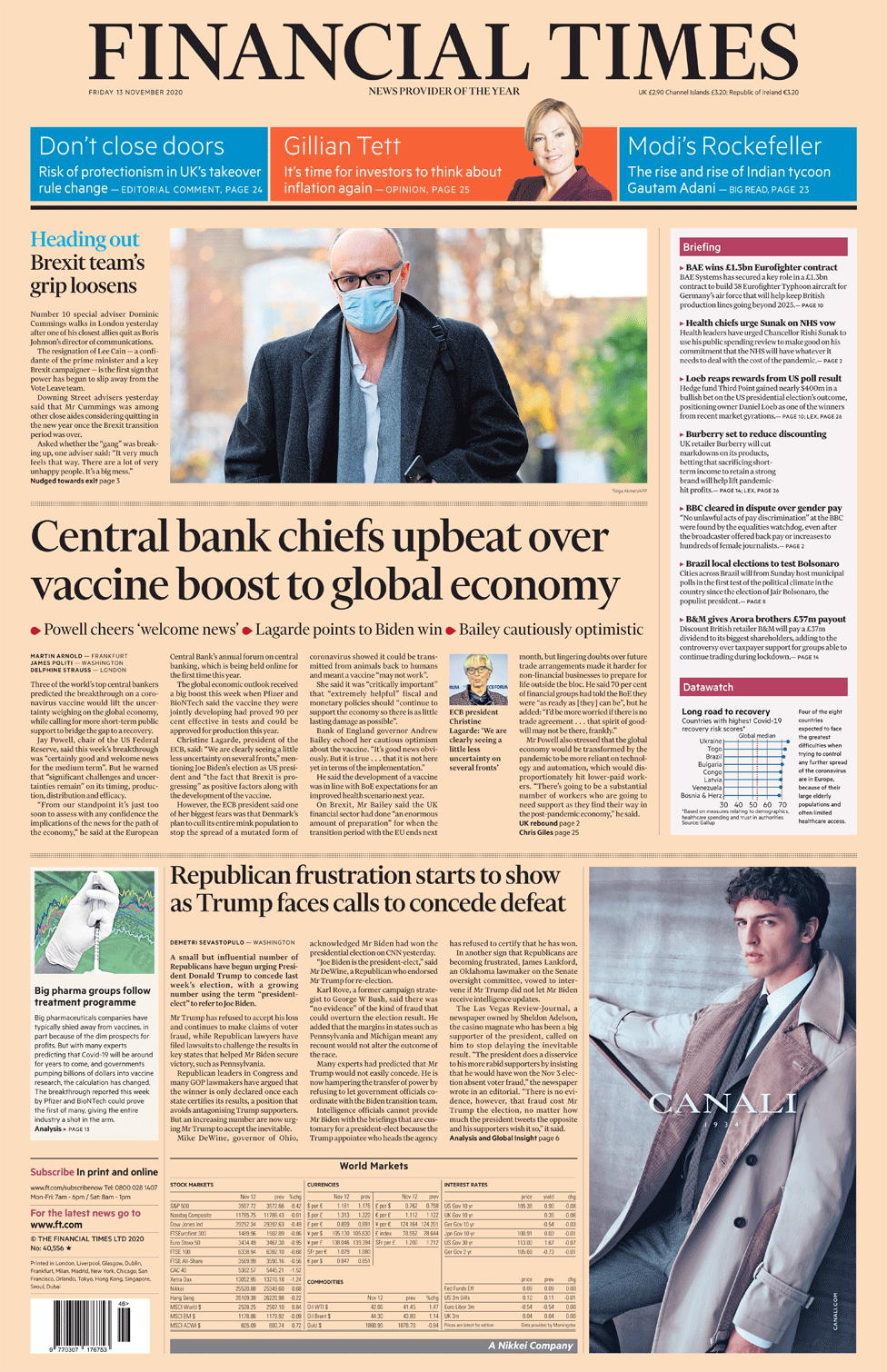 By BBC NewsStaffPublishedduration3 hours agoimage captionThe internal tensions inside No 10 again feature on the front pages, although the early editions you see here would have been printed before the news came of adviser Dominic Cummings’ own departure plan. The Guardian says Boris Johnson has been warned by Conservative MPs that he has one final…

Dominic Cummings’ departure had not been confirmed by the time the first editions were published – but was widely anticipated.

“It’s the beginning of the end” is the Daily Telegraph’s headline. It suggests Boris Johnson’s chief adviser had been hugely weakened by the resignation of the communications director, Lee Cain.

The Times focuses on a new era it believes Boris Johnson is now planning. A Downing Street source suggests he will take a softer approach to Scotland, promoting the union, rather than just saying no to an independence referendum, and that he will push hard on a green agenda.

Calls to overhaul the No 10 operation have come from “a string” of Conservative MPs, according to the Guardian, with one suggesting it was time “to get a grip”. A backbencher tells the Independent it’s not about policy, but getting Downing Street to be more professional.

England’s former chief medical officer, Dame Sally Davies, has told the Telegraph that the UK was not as ready as it should have been for Covid-19.

In an interview with the paper, she blames Public Health England for assuring her that a coronavirus epidemic could “never travel this far in big numbers from Asia”.

The i warns on its front page that the goal of a vaccine giving the UK herd immunity could put at risk by what it calls “baseless safety fears”.

The i reports that online misinformation campaigns and genuine concerns have put a significant minority of people against inoculation.

But the scientist behind the first vaccine tells the Guardian he is confident the product can “bash the virus over the head,” and bring an end to the pandemic.

The head of BioNTech, Ugur Sahin, explains that the regulatory authorities helped ensure the jab could be developed at speed. He compares it to crossing London with no traffic.

Campaigners are to fight the decision to give the go ahead for a tunnel near Stonehenge, according to the Times and the Guardian. They have six weeks to seek a judicial review.

The Times says the Stonehenge Alliance, made up of environmentalists and archaeologists, could challenge the decision on the grounds that it clashes with commitments to protect Unesco sites.

The Daily Express leads with what it calls a vow by the Queen to serve the country “for all of her life.” Her determination, the Daily Express suggests, is an “inspiration for us all.”

Nicola Adams’ departure from Strictly Come Dancing after her dance partner tested positive for coronavirus features in many of the papers, with the inevitable boxing puns.

“Dance floored”, says the Sun; “a real body blow” says the Daily Mirror, which suggests she should be “allowed to come back fighting for next year’s series”.

And lawyers and officials at a court were greeted with an unusual list of defendants at Stoke-on-Trent Crown Court, according to the Guardian,the Mirror and the Mail Online. It seemed Donald Duck, Tinkerbell and Buzz Lightyear were all due in the dock.

But before children could become alarmed, HM Courts and Tribunals Service explained that the cartoon characters’ names had been listed only as part of a test of their system.