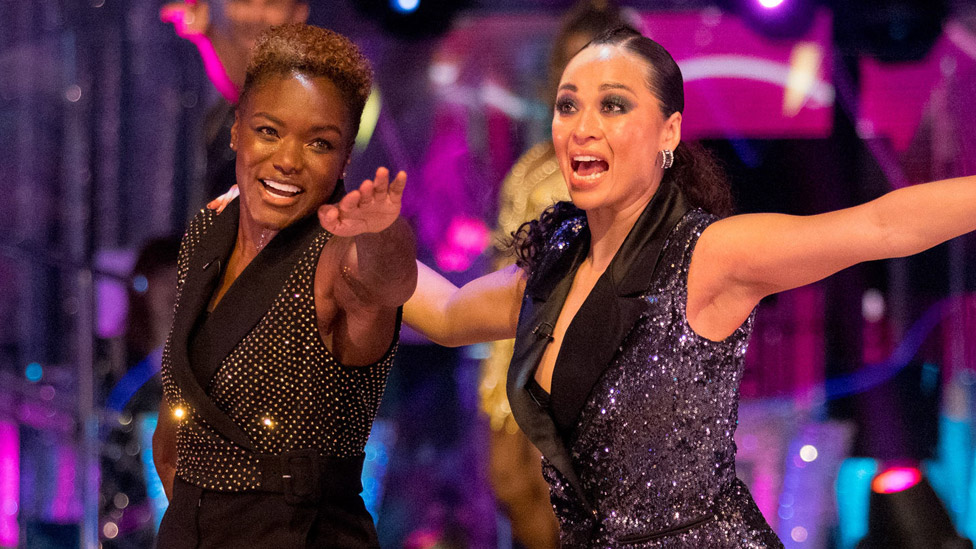 Publishedduration45 minutes agoimage captionNicola Adams and Katya Jones during the launch show of Strictly 2020Former boxer Nicola Adams and her Strictly Come Dancing partner Katya Jones have left the BBC contest after Jones tested positive for Covid-19.A statement said the programme’s “protocols” meant the pair would now self-isolate and would not be able to take…

A statement said the programme’s “protocols” meant the pair would now self-isolate and would not be able to take part in the rest of the series.

They made history as the first same-sex couple to take part in the UK show.

Meanwhile, judge Motsi Mabuse has said she will be self-isolating this weekend after an “urgent” trip abroad.

“I had so much more to give and so many people to win this for! But I just want to say a huge thank you to Katya for being the best dance partner anyone could ask for.

“I’m gutted to be out of the competition but in these unprecedented times and as frustrating as it is, the Covid measures in place are to keep everyone safe, and I’m doing what I can to help.”

Jones is asymptomatic and said she was “devastated to leave this way”.

“But I’ve made a friend for life and loved every moment of this special journey,” she added.

Host Claudia Winkleman said she was “so sad”, while It Takes Two presenter Zoe Ball said she was “gutted for Nicola and Katya”, adding: “You made history girls.”

Adams, who won Olympic gold medals in 2012 and 2016, said she had asked the BBC for a female partner because it was “definitely time for change”.

The pair came in the top half of the leader board with their quickstep in week one, and impressed the judges again in week two with their street/commercial routine.

But they found themselves in the dance-off last week after performing their jive, eventually being saved by the judges at the expense of former NFL player Jason Bell.

A number of crew members are also self-isolating after coming into contact with Jones, according to the PA news agency.

The show’s executive producer Sarah James said: “We are incredibly sad that these unfortunate circumstances mean that Nicola and Katya are unable to continue on Strictly. They are a brilliant partnership and had already achieved so much during their time on the show.”

Meanwhile, Strictly judge Motsi Mabuse will appear on the show via video link this weekend, as she is self-isolating following an “urgent” trip to Germany.

The judge, who lives in Germany, wrote on Twitter: “I’ll be watching from home and by the power of technology, should be in your living rooms. Watch out though, I’ll be doing my own hair and make-up.”

It Takes Two co-host Rylan Clark-Neal is also self-isolating after revealing he has been in recent contact with someone “outside of work” who has tested positive.

He said he had since tested negative, but will miss two weeks of the BBC Two spin-off and his BBC Radio 2 weekend programme.

Adams’ departure leaves nine celebrities in the line-up. One, HRVY, tested positive before the launch show but was able to finish isolating in time to take part.

The series will continue as planned on Saturday, the BBC said. Each partnership is in a bubble and having regular coronavirus tests.