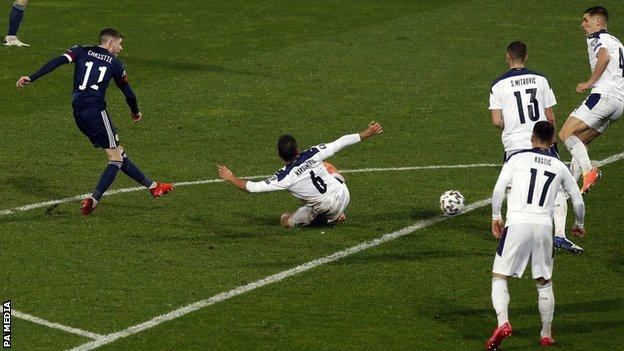 Ryan Christie’s strike gave Scotland the lead in BelgradeScotland’s agonising 23-year absence from major men’s tournaments is finally over after an historic and epic shootout victory over Serbia.David Marshall saved magnificently from Aleksandar Mitrovic for a 5-4 sudden-death win after Scotland had dominated, led until the 90th minute, then hung on for penalties in Belgrade.Ryan…

Scotland’s agonising 23-year absence from major men’s tournaments is finally over after an historic and epic shootout victory over Serbia.

David Marshall saved magnificently from Aleksandar Mitrovic for a 5-4 sudden-death win after Scotland had dominated, led until the 90th minute, then hung on for penalties in Belgrade.

However, a tiring Scotland were impeccable from the spot as they ended a barren streak of 10 missed tournaments.

Clarke’s men are now nine games unbeaten – their best run in 44 years – and will face England, Croatia and the Czech Republic in Group D at next summer’s delayed finals.

If there was a Scotland way to finally get back to the big time, then this was it. Not content with putting the nation through the trauma of a shootout in the semi-final against Israel, they repeated the dose.

Yet while a nation’s nerves were fraying back home, Scotland’s players exuded a calm authority. They were comfortable in possession for an hour, zipping passes around, and harrying the visitors.

Lyndon Dykes was putting in a gruelling shift, winning countless aerial duels and making the ball stick. He was just one of the heroes in blue all over the pitch.

On an occasion demanding a big performance, every Scotland player delivered.

There were flashes of first-half threat from Scotland, the best of them when a Dykes knockdown led to John McGinn breaking free down the left-hand channel. The midfielder’s shot needed power and precision but lacked both as Predrag Rajkovic smothered at the second attempt.

Serbia – for all their talent – looked uneasy and had barely a sniff. When they did muster a chance midway through the opening half, it almost yielded the opener, with Sasa Lukic’s drive from a Mitrovic lay-off whistling inches wide.

It was an isolated scare, though, and the interval did nothing to halt Scotland’s momentum. They should have led early in the second half when Dykes danced past three defenders and squared for the in-rushing Andy Robertson to blaze over.

A big chance gone. But within moments the disappointment made way for euphoria. Callum McGregor pounced on a stray pass out of Serbia’s defence and shuttled the ball to his Celtic team-mate. Christie’s nifty footwork opened up the space for a shot and he arrowed in off the base of the post.

Scotland were in dreamland. Serbia had been pretty abject so far – surely there was an onslaught to come? The nagging doubt that it could all go horribly wrong kept gnawing away at fans ingrained in glorious failure.

Clarke’s men could have put the tie to bed – a McGregor strike drifted wide and Christie was agonisingly close with a curling effort.

But Serbia began to hammer at the door in the frantic closing stages. Sergej Milinkovic-Savic, Mitrovic and Jovic all thundered headers narrowly past Marshall’s right-hand upright.

By now it was an excruciating watch. And – in true Scotland fashion – the sucker-punch arrived. Serbia slung over a corner and Jovic had lost his marker to send a header down into the turf and up over Marshall into the top corner.

Clarke’s men were crestfallen, but not out for the count yet. Extra time was arduous with Serbia on top as Nemanja Gudelj’s dipping drive brought out a brilliant diving save from Marshall and Aleksandar Katai had pot-shots either side of the interval.

The Tartan Army’s fingernails were nibbled nearer the quick but their heroes weren’t to be denied. Scotland staggered towards the shootout, clearly exhausted. One final push was required and Leigh Griffiths, McGregor, Scott McTominay, Oli McBurnie and Kenny McLean all delivered from the spot.

Then Marshall flung himself to his left to palm away Mitrovic’s effort. Cue bedlam in the Scotland ranks as two decades of frustration poured out. Scotland are back.

Man of the match – Lyndon Dykes

This can be the start of something special for a Scotland squad who have the mentality to match their talent. The devastating blow of conceding a last-minute equaliser would have broken lesser men. Yet Clarke’s players dug in with a sheer bloody-minded refusal to be beaten, then showed nerves of steel – and no little skill – in the shootout.

Goal hero Christie’s tearful and poignant post-match interview captured the mood of a nation. He and his team-mates have delivered where so many before them failed.

Scotland head coach Steve Clarke: “It’s been a very difficult time for everyone. We spoke about trying to make the nation smile, hopefully we’ve done our bit.

“Every player turned up and not just the ones that started, I’m also talking about the players from the bench and the whole squad.”

Scotland will have to peel themselves off the ceiling for a double-header to end their Nations League campaign away to Slovakia (14:00 GMT) on Sunday and Israel (19:45) on Wednesday.