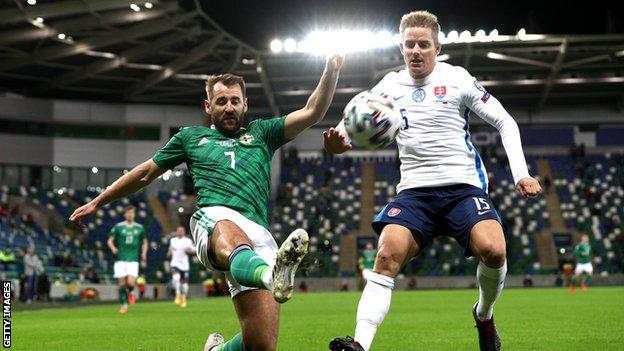 Niall McGinn and Tomas Hubocan in action during the first half at Windsor ParkNorthern Ireland’s hopes of reaching Euro 2020 were ended as Slovakia scored deep into extra time to win their play-off final at Windsor Park.The home side had equalised in dramatic style when defender Milan Skriniar put the ball into his own net…

Northern Ireland’s hopes of reaching Euro 2020 were ended as Slovakia scored deep into extra time to win their play-off final at Windsor Park.

The home side had equalised in dramatic style when defender Milan Skriniar put the ball into his own net with two minutes of normal time left to cancel out Juraj Kucka’s early opener.

Substitute Kyle Lafferty then nearly won it for Northern Ireland when his long-range effort hit the post in the 90th minute.

But the game went to extra time and Michal Duris, on from the bench, made the most of a lucky ricochet to score Slovakia’s winner in the 110th minute.

The win takes Slovakia though to their second consecutive Euro finals and prevents Northern Ireland from repeating their feat from four years ago.

Northern Ireland, backed by a 1,060 crowd that generated a good atmosphere despite being so low in numbers, had been aiming to do just that and reach what would have been a fifth major international tournament for the country.

However, while they raised themselves for spells during the game – and perhaps looked more likely to grab a winner during extra time – it was generally a disjointed performance from Ian Baraclough’s men.

After the joy of the Euro 2016 in France, Northern Ireland had given themselves the opportunity to qualify again by beating Bosnia & Herzegovina on penalties in the play-off semi-final in October.

A night that ended in despair would have been so different had Lafferty’s excellent shot from distance just seconds before the end of 90 minutes gone in rather than striking the outside of the Slovakian post.

Northern Ireland started the game in positive fashion and looked lively for the opening 15 minutes, with the triangle of Stuart Dallas, Paddy McNair and Nial McGinn down the right looking threatening.

However, a sloppy mistake by George Saville in the 17th minute led to Slovakia’s opening goal as the midfielder misplaced a header back to Jonny Evans which allowed Kucka to run through on goal.

He was unopposed but still needed to show a lot of composure and good technique to side-foot a clever low finish past Bailey Peacock-Farrell and inside the post.

Despite a strong start to the second half, it looked like Northern Ireland’s bid for qualification was fading until Paddy McNair did well down the right on 87 minutes and produced a low cross that was turned into his own net by Skriniar.

After Lafferty was denied by the woodwork, the match was directing towards penalties before a long ball bounced off Evans and into the path of Duris.

The substitute struck his shot well but home goalkeeper Bailey Peacock-Farrell, a hero for Northern Ireland in the play-off semi-final win, allowed the ball to squeeze in at his near post when he looked well positioned to keep it out.

Key players unable to lift NI to another big win

Northern Ireland’s success in recent years has been built on a core of experienced players who have delivered on a regular basis, particularly in crucial matches.

While the squad has lost a few stalwarts to retirement, captain Steven Davis, Premier League table-topping Leicester City defender Evans and the versatile Dallas of Leeds are still vitally important to the team’s prospects.

Evans was an injury doubt before the squad was named and looked like he may have been labouring as the match went on, although he was hugely unfortunate in the incident that saw the ball bounce off him and into the path of Duris for the winning goal.

Davis has been the heartbeat of the team for a long time but, playing in the deep-lying midfield role he has become accustomed to, was unable to impose himself on the match as Slovakia captain Marek Hamsik and Stanislav Lobotka in particular looked assured in possession.

Dallas looked to have taken a heavy blow to his arm in the first half and, while the ever-committed former Crusaders man battled on for the whole match, his attacking threat was limited from full-back.

What next for Baraclough and his players?

There were few surprises in Baraclough’s starting team and shape, the only one being Josh Magennis playing on the left of the front three and Conor Washington through the centre, with the latter firing straight at the goalkeeper during Northern Ireland’s early second-half rally.

They looked too happy to sit off the Slovakians during the first half and let them dominate possession and, while they had a renewed energy after the break, they were unable to sustain that until the late equaliser and Lafferty’s fine strike.

Despite the euphoria of the shootout win in Bosnia, Northern Ireland have now failed to win during 90 minutes of any of Baraclough’s first six games in charge, and have fallen behind in each one of them.

Perhaps viewed as more of a safe replacement for Michael O’Neill than an exciting one, his remit from the Irish FA would very much have been to navigate the play-offs and secure another Euros qualification – and the financial rewards for Northern Ireland football that come with it.

The boldness he showed with his substitutions in Sarajevo was impressive, but the former Motherwell and Sligo Rovers boss has a major job on his hands in working out where the squad goes from here.

It is always easy for an ‘end of an era’ feel to engulf an international side after such a disappointment, and he will no doubt face tough questions, but in the short term has to prepare his squad for Nations League matches away to Austria and at home to Romania.

Victories in either of those will obviously not make up for missing out on the Euros this time, but he needs the momentum of his reign to change – and quickly – before the qualifiers for the World Cup come around.