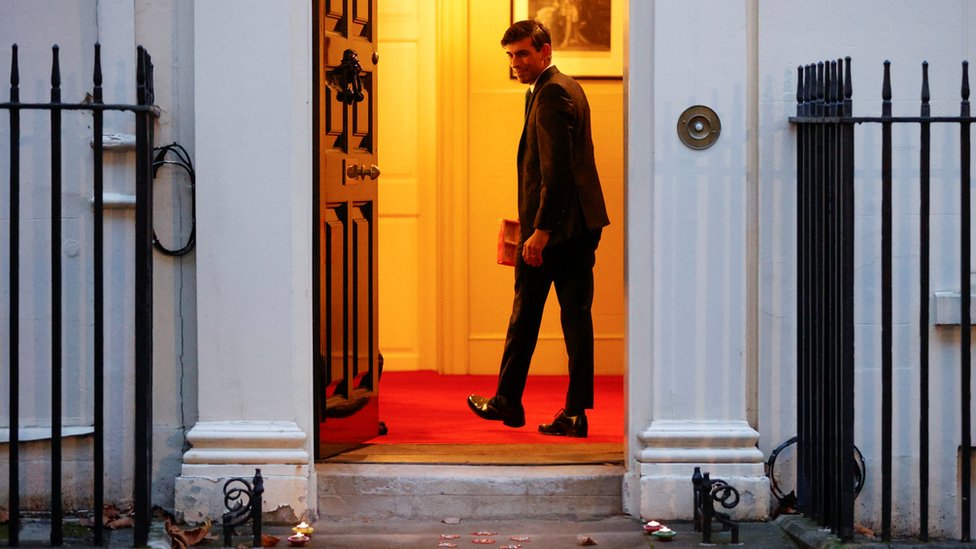 Publishedduration3 hours agoimage copyrightReutersimage captionRishi Sunak lit candles outside 11 Downing Street on Thursday to mark the festivalChancellor Rishi Sunak says celebrating Diwali this year will be difficult but has urged others also marking the event to stick to lockdown restrictions.Mr Sunak, a practising Hindu, encouraged families to meet up virtually this weekend, adding: “We’re…

Chancellor Rishi Sunak says celebrating Diwali this year will be difficult but has urged others also marking the event to stick to lockdown restrictions.

Mr Sunak, a practising Hindu, encouraged families to meet up virtually this weekend, adding: “We’re going to get through this.”

Outdoor celebrations around the UK have been called off due to the pandemic.

With a nationwide lockdown in place in England, many councils are providing online Diwali celebrations on Saturday.

Diwali is the five-day festival of lights, celebrated across the world by millions of Hindus, Sikhs and Jains, who traditionally illuminate their homes with candles and lanterns.

This year it began on Thursday, with the main day of celebrations taking place on Saturday.

Mr Sunak, speaking to the BBC’s Sima Kotecha, said: “Faith is important to me, I’m a practising Hindu, I pray with my kids, visit the temple when I can – at the moment rather less so because I’m busy.

“For us as Hindus, Diwali is special, and it’s going to be difficult this year.

“But we’ve got Zoom, we’ve got the phone, and most importantly, we’ve got each other. Whether you can see someone or not the bond of family, that bond of love is always going to be there. And it will be there on 3 December as well.”

Lockdown restrictions in England mean families cannot meet up with people from different households or go to the temple for group worship.

The nationwide restrictions are due to end on 2 December, and Mr Sunak said families need “to stick with this for a couple more weeks”.

“We’re going to get through this,” he said. “And it’s going to be so much better on the other side. And we’ll have lots of happy times afterwards. But to keep everyone safe right now, just follow the rules.”

The chancellor also defended the government’s ambition of lifting lockdown before Christmas, despite accusations that other faith celebrations such as Diwali had been overlooked.

“Of course this is a secular country. But Christmas is also a national time when regardless of whether you’re going to midnight Mass or to church, it’s a time when most people have time off work, we have holidays, state holidays, it is a time when everyone hangs out.

“I mean, I’m Hindu, but I’m also equally going to be tucking in to my Christmas meal – the kids are excited about that.”

He added: “We’ve had restrictions all the way through this year at different times, in different parts of the country. And it’s affected all sorts of people in different ways.”

Some of Britain’s most popular temples will be hosting virtual ceremonies to mark the festival.

Tens of thousands of people usually join Diwali celebrations in Leicester – believed to be among the biggest outside of India – but the city council is this year asking people to send in video messages as part of their online celebrations.

London’s main Diwali celebration, which usually attracts around 30,000 people to Trafalgar Square, has also been replaced with an online event.

Similar outdoor celebrations in Edinburgh and Cardiff have been cancelled this year due to restrictions in Scotland and Wales, though digital events including performances will also be held in their place.