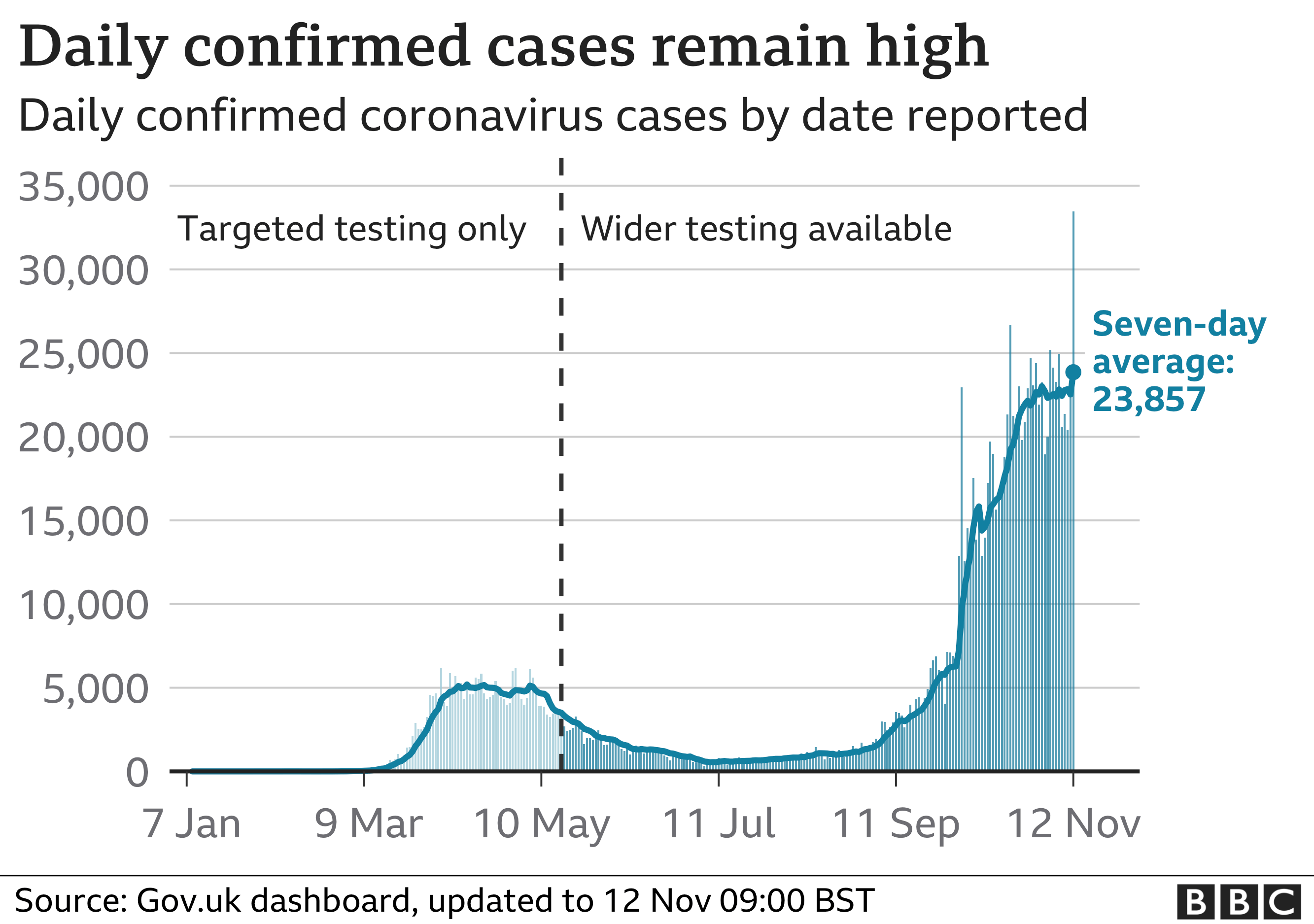 Publishedduration1 hour agoimage copyrightGetty Imagesimage captionSoldiers have helped with a city-wide trial in Liverpool, as one of several ways the government has ramped up coronavirus testingA record 33,470 people have tested positive for coronavirus in the UK government’s latest daily figure.It is the highest daily number reported in the UK, although testing capacity has increased…

A record 33,470 people have tested positive for coronavirus in the UK government’s latest daily figure.

It is the highest daily number reported in the UK, although testing capacity has increased greatly since the first wave of the epidemic.

It brings the total number of cases in the UK to more than 1.29 million.

Government minister Alok Sharma said rising case numbers were “a reminder to us about why we are taking action to stop the spread of the virus”.

On Wednesday the UK became the first country in Europe to pass 50,000 Covid deaths, based on government figures.

On Thursday, a further 563 people were reported to have died within 28 days of a positive Covid test, down from Wednesday’s figure of 595.

Other ways to measure deaths, such as the number of people whose death certificates mention Covid-19, have put the overall toll at more than 60,000.

BBC health and science correspondent James Gallagher said the spike in cases could have been driven by changes in people’s behaviour in the run-up to England’s four-week national lockdown, which began on 5 November but was announced on 31 October.

Dr Yvonne Doyle, medical director at Public Health England (PHE), said: “The majority of cases reported today were from tests carried out on 9 and 10 November, which includes infections acquired in the days leading up to new measures on 5 November.

“Limiting contact with others will help to stop the spread of the virus and protect the people we love,” she said.

Dr Doyle added that the highest rate of infections continues to be seen in the younger generations, but is “worryingly” rising quickly in those aged over 80, who are most at risk of becoming seriously ill.

NHS England medical director Prof Stephen Powis played down the jump in cases, telling a Downing Street press conference it was important to “not just take one day in isolation”.

The Department of Health and Social Care said “daily fluctuations” can happen in the daily figures “so it is important to avoid drawing conclusions from one day’s figures”.

“We must instead focus on the wider trend which is increasing, particularly in those at highest risk of disease,” it said, adding it was “vital” the public continued to follow the guidance to stop the spread of the virus.

Experts have previously warned against describing the daily figure as a record because there was no widespread testing programme during the first wave of the epidemic.

Reading too much into one day’s data is dangerous.

But there is no getting away from the fact the jump in positive cases is worrying.

We’ve not seen this kind of jump before – it is both 10,000 above Wednesday’s figure and the current rolling average.

It’s unclear why this is. The government says there was no backlog of tests that were processed, which could have explained it.

The mass testing in Liverpool is not thought to be feeding into the figure yet.

The number of tests processed has gone up, but that has happened previously without returning such a high number of positive cases.

An increase in socialising last week ahead of lockdown could be a factor.

Whatever the cause, the hope is it’s a one-off blip. Cases had been pretty stable for a fortnight before this.

And there was growing hope next week would see figures falling as the impact of lockdown takes effect.

The next few days will be crucial.

Despite the UK-wide rise in cases, the average number of new cases every day is no longer rising in Scotland.

First Minister Nicola Sturgeon has said recent measures, including the introduction of a new five-tier system of rules for different areas, have slowed the spread of the virus “very significantly”.

However, latest figures show there are more patients in hospitals in Wales with Covid-19 than at any other time – including during the peak of the first wave of the epidemic earlier this year.

Meanwhile, tighter Covid restrictions in Northern Ireland – which have been in place since 16 October – will be extended for one more week, the executive has agreed.

Mass testing – where a huge proportion of the population is tested for Covid, whether or not people have symptoms – has been touted as a way to allow people to live a more normal life, and even to help avoid future lockdowns.

Prime Minister Boris Johnson has promised a “massive expansion” in such testing in the UK.

Liverpool has been the first city to trial this, with all residents and workers in the city being offered a test.

Mr Johnson has urged all of the city’s 500,000 residents to take part, in an attempt to drive the spread of the disease down.

Earlier this week some 23,000 people had been tested as part of the trial – which saw Anfield football stadium become one of 18 test centres – with 154 people testing positive.

As the number of daily cases jumped on Thursday, Prof Powis also warned of an increasing number of people needing hospital treatment for Covid-19.

He told the Downing Street briefing there were now more than 12,700 people in hospital with coronavirus in England – up from 3,827 a month ago.