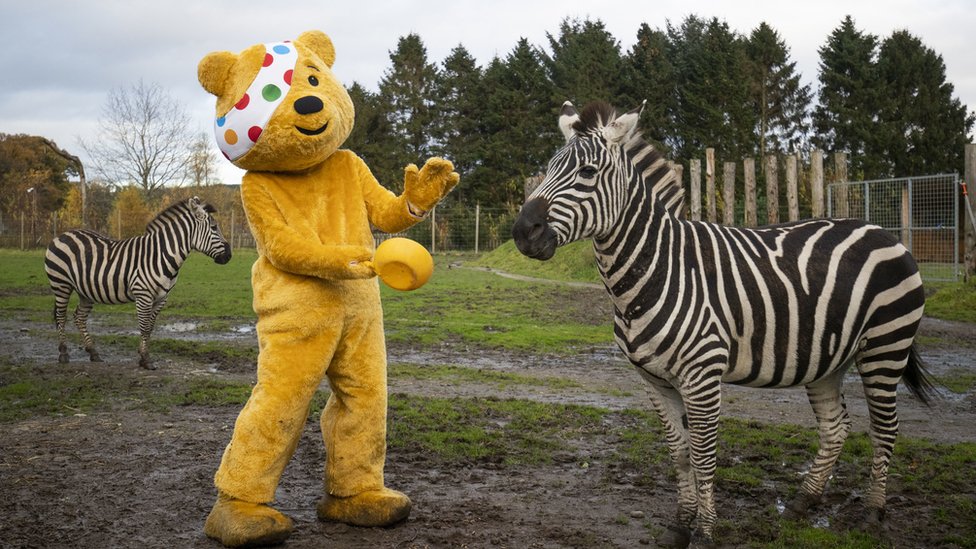 Publishedduration1 hour agoimage copyrightPA Mediaimage captionPudsey Bear visited Blair Drummond Safari Park near Stirling to help feed the zebras ahead BBC Children in Need 2020Pudsey Bear returns with a host of celebrities on Friday night for the 40th anniversary of the BBC’s fundraiser Children in Need.This year’s show will be shorter and is audience-free due…

Pudsey Bear returns with a host of celebrities on Friday night for the 40th anniversary of the BBC’s fundraiser Children in Need.

This year’s show will be shorter and is audience-free due to Covid, but there are still plenty of treats in store.

Peter Crouch and Andy Murray will go head-to-head in a game of Paddle Tennis, while EastEnders and Strictly have both filmed special clips.

And an all-star cast will cover Oasis’s Stop Crying Your Heart Out.

It got its first airing on The Zoe Ball Breakfast Show on Radio 2 – and the video will premiere around 21:00 GMT on BBC One.

“Children in Need is such a special charity and so loved by everyone, including me,” said Kylie.

“It was a privilege to take part in this recording with so many amazing artists.”

“This year it feels even more poignant than ever, and I hope we can all come together to raise as much as possible” she added.

Ahead of the show, Joe Wicks completed his 24-hour workout challenge, raising more than £1m.

He was joined by stars including Louis Theroux, Melanie C, Sam Smith and Dame Kelly Holmes as he completed a range of activities, from cycling to yoga, boxing to rowing and his signature high intensity workouts.

A special edition of DIY SOS, which saw a group of volunteers build a new, all-inclusive surf school in Swansea, has also raised £844,000 after being screened on BBC One on Thursday.

Host Nick Knowles wiped away tears when he was informed of the total on the BBC’s Morning Live on Friday.

“It’s a big deal,” said the presenter. “We understand that times are tough, Covid times are tough and people are worried about their finances and we were up against the football, all those things.”

He added the total had been expected to be “not as massive as normal times”.

In fact, it was the highest sum ever raised by the show’s annual Children in Need episode.

The main Children In Need show kicked off at 19:00 GMT on BBC One, hosted live in London by Mel Giedroyc, Alex Scott, Chris Ramsey and Stephen Mangan.

“It’s a bit stripped back,” Giedroyc told BBC News, ahead of the show. “But the key thing [is] the vibe will be exactly the same. There will be great sketches, there will be lots of famous faces turning up. Nothing has really changed.”

The telethon, which raises money for disadvantaged children in the UK, raised an “on the night” total of £47.9m last year.

So @petercrouch challenged me a while back to a game of tennis, apparently he used to be quite good. Not sure he was quite prepared for padel tennis though… He tried every trick in the book to try and get the win… tune in to @BBCCiN tonight to find out how he got on…. pic.twitter.com/1JIOGJSZ8t

The show will also include a special clip from the Doctor Who team, while TV presenter Emma Willis will narrate Life in Lockdown – a film showing youngsters living through difficult circumstances during the coronavirus pandemic.

The feature follows research commissioned by the charity, which found that 94% of children and young people have had cause to feel worried, sad or anxious in the last six months.

“The current pandemic has affected all of our lives, but some families have additional and complex needs and challenges outside of Covid-19,” said Willis.

“Being part of this documentary, I was able to see just how vital BBC Children in Need’s funds are to families across the UK in times of crisis

“People are facing incredibly challenging times, but I hope the public tune in and donate if they can to a much-needed cause.”

There will also be appearances by McFly, Beverley Knight, and Shawn Mendes; as well as the cast of West End musical Six.

Comedy sketches will come courtesy of the stars of King Gary and The Goes Wrong Show; while former One Show host Matt Baker returns for the gruelling Rickshaw Challenge.