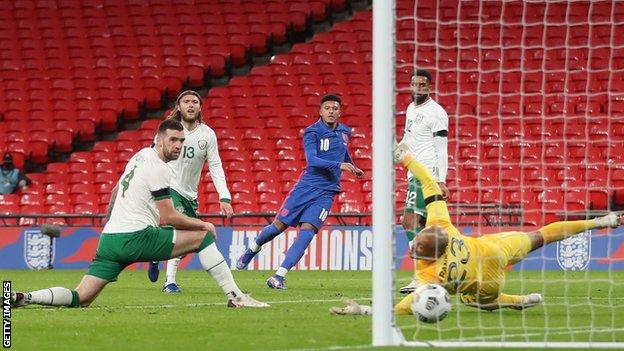 Jadon Sancho’s low shot was the pick of the goalsEngland strolled to victory against the Republic of Ireland in their friendly international at Wembley.Manager Gareth Southgate gave his undercard a chance as he kept England’s main players back for the Uefa Nations League match in Belgium on Sunday – but they still had far too…

England strolled to victory against the Republic of Ireland in their friendly international at Wembley.

Manager Gareth Southgate gave his undercard a chance as he kept England’s main players back for the Uefa Nations League match in Belgium on Sunday – but they still had far too much for an outclassed Republic side.

Jude Bellingham, brought on as a substitute for his debut in the second half, became England’s third-youngest full international at 17 years and 137 days.

Harry Maguire, given the captain’s armband, erased some of the misery of his last England appearance – when he was sent off in the Nations League home defeat by Denmark – by heading in Harry Winks’ cross after 18 minutes.

Jadon Sancho doubled England’s advantage before the break and their total control was emphasised when Dominic Calvert-Lewin scored emphatically from the penalty spot in the 56th minute after Bukayo Saka was fouled by Cyrus Christie. It sealed England’s first win against the Republic since 1985.

All judgement of England must be placed in the context of a mediocre Republic of Ireland performance, but this was still a very impressive night for Aston Villa’s Jack Grealish.

The 25-year-old, who actually played for the Republic’s Under-21 side before switching allegiance to England, has been the subject of much debate with many wondering why Southgate has not used his mercurial talents more regularly.

Here, given a roving role, Grealish was in confident mood as he relished possession and was one of England’s main creative forces before being substituted and getting a warm embrace from his manager after a fine display.

It remains to be seen whether Grealish has done enough to figure more prominently in Southgate’s thoughts for the key clash in Belgium but there is no doubt he made another big impression, albeit in a game that occasionally resembled a practice session.

Maguire cut a disconsolate figure on his last Wembley appearance for England, capping a 31-minute horror show against Denmark with a second yellow card.

That night, he looked for all the world like someone who needed to be taken out of the team – after the on-field setback of being in the Manchester United defence that had conceded six goals at home to Tottenham and the off-field trauma of his well-publicised court case in Greece.

Here manager Southgate demonstrated his huge faith in Maguire by making him captain – and the centre-back had such a comfortable night that he was able to set aside any minor defensive duties to score one goal and have opportunities for more.

It will provide the perfect morale booster for the stern test in Belgium.

England’s second string saw plenty of good things from Calvert-Lewin, while Henderson made one smart save in his 45-minute debut performance,

It was hard to make any serious judgements in such a low-key friendly but Southgate will be pleased England were able to show such domination for almost the entire game.

‘We were set up to play football’

England manager Gareth Southgate told BBC Radio 5 Live: “We were really pleased. We had a good bedrock with the back three who were our most experienced players in the team.

“We were not as strong physically in midfield as we might normally be but we played with intelligence.

“Jack Grealish was very good. He’s in really good form and he’s playing in the areas we want him to play, not coming too deep, and he’s affecting the game in the final third.

“We wanted to give Jude Bellingham 20 minutes or so to give him a feel of it. He was nervous at the start, it’s a huge occasion to come with the team at his age and be as mature as he has been with us.

“You saw as it developed he settled and got into the game. That’s the experience we wanted to give him.”