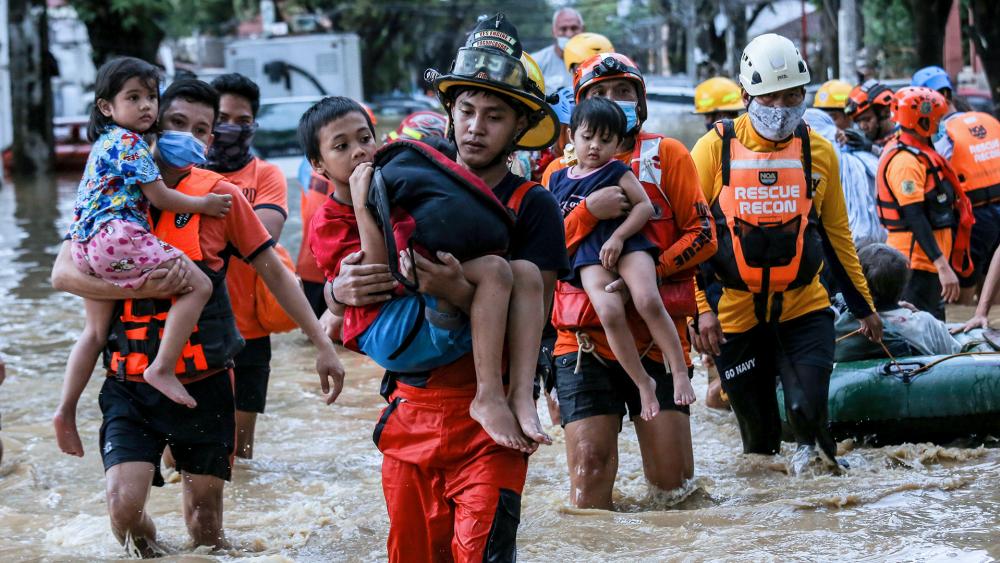 Rescuers carry children out from a flooded street due to heavy rains brought by Typhoon Vamco in Marikina City, east of Manila, Philippines, Nov. 12, 2020. (AP Photo/Basilio Sepe) The Philippines has been battered by a spate of strong typhoons – the latest one, Vamco, has caused much flooding in Metro Manila and devastation in the…

The Philippines has been battered by a spate of strong typhoons – the latest one, Vamco, has caused much flooding in Metro Manila and devastation in the Bicol region.

Rosalinda Lucero told CBN News, “Our abaca crops and the coconuts are all gone. Where will we get food? Every time I see a helicopter I wave and shout for help but they don’t see me.”

Rosalinda is among the thousands who lost their homes when typhoon Goni hit their town in the Bicol region. She is worried because she has nothing left to feed her grandchildren. It’s been a week since Goni struck but they have not received any assistance because their village is hard to reach.

With the military’s help and coordination with the local government, an Operation Blessing team traveled to Rosalinda’s village, crossing rivers to bring their remote village much-needed food, hygiene kits, and prayer.

Rosalinda said she is grateful because finally her cries for help have been heard. However, after only a few days of good weather, another strong typhoon hit the Bicol region.

Barely recovering from the devastation brought about by Typhoon Goni, people in the same provinces are bearing the brunt of Typhoon Vamco. Operation Blessing teams are already positioned to give immediate assistance to the victims in the affected areas.

Operation Blessing teams are also conducting disaster relief efforts in Metro Manila that has also been directly hit by Vamco. They will be distributing food, mats, hygiene kits, and drinking water to typhoon survivors.